Investors everywhere wanted a Hillary Clinton victory, and expected it. In the early hours of Wednesday, they paid the price for their forecasting mistake. But the selll-off faded somewhat later in the morning, as president-elect Donald Trump promised to stimulate the U.S. economy.

As Mr. Trump picked up state after state overnight, turning the U.S. map into a sea of Republican red and ending  Ms. Clinton's journey to the White House, a flight to safety overwhelmed the markets. Gold, U.S. Treasuries, the Swiss Franc, the euro and the Japanese yen surged and risky investments were dumped.

At first, the market plunge was being compared in its severity to the fall after the Sept. 11, 2001 terrorist attacks on New York and Washington, or Brexit, Britain's vote on June 23 to leave the European Union.

"We are experiencing a similar night to the Brexit," said Ipek Ozkardeskaya, senior market analyst with London Capital Group. "The mispriced Trump victory is taking its toll on the global markets."

Read more: How the markets reacted to Trump's lead in five key charts

In the currency markets, the big loser was the Mexican peso. It fell 13 per cent against the dollar as traders took the view that Mexico, which delivers 80 per cent of its exports to the United States, will suffer most under a Trump presidency. Mr. Trump has vowed to build a wall along the United State-Mexico border and punish American companies, such as the auto makers, if they continue to shift production to Mexico.

The damage on the European markets, however, was not as bad as had been forecast by the futures markets. By noon, London time, The FTSE-100 was down only 0.25 per cent and the euro, which had soared as investors sought less risky assets, was up only 0.30 per cent against the dollar.

Still, Corporate Europe in general worries that a Trump victory will trigger a massive, transatlantic tax arbitrage war. Mr. Trump, if elected, has vowed to reduce corporate tax rates. Doing so might encourage the repatriation of hundreds of billions of dollars held by U.S. companies in low-tax European regions such as Ireland. It might also encourage big European companies to shift some of their operations, maybe even their head offices, onto American soil.

Even before a victor was declared, some economists were taking the view that Mr. Trump would win the election and make good on his trade protectionist pledge.

"Aggressive protectionism is probably the greatest threat to U.S. and global growth and financial markets, and more expansive fiscal policy the greatest opportunity for stronger growth," ING's chief international economist Rob Carnell said in a note published early Wednesday morning. "Exactly what mix of these two opposing policy stances will follow may not be fully clear for months."

He said the case for a rate hike in December from the U.S. Federal Reserve now "has diminished substantially."

In a note, the French bank Société Générale said international trade would suffer under a Trump presidency. But his presidency would also point "towards lower [U.S.] tax rates and possibly an easier overall fiscal stance if it's hard to get spending cuts through as an offset."

While Americans were casting their votes on Tuesday, financial markets were expecting – and had largely priced in – a scenario that would see Ms. Clinton become president, the Democrats take control of the Senate and the Republicans hold the House of Representatives.

That outcome was the one "generally favourable to markets, based on historic performance," said Norman Levine, managing director of Toronto-based fund company Portfolio Management Corp.

But as the night edged on, a reaction to the prospect of a Trump victory could be seen in Asia's equity trading as well as currency and commodity markets, said Philip Petursson, chief investment strategist at Manulife Investments. "If this ends up a Trump victory I expect U.S. and Canadian markets will sell off [Wednesday]." Should Ms. Clinton win, "markets would breathe a sigh of relief," he added.

The election's impact on markets through the rest of the year depends greatly on which candidate is victorious, said François Bourdon, chief investment solutions officer at Fiera Capital.

Ms. Clinton represents the status quo, Mr. Bourdon said, with the Canadian dollar poised to benefit, interest rates set to climb and a 5 per cent to 6 per cent increase likely in the stock market through to the end of the year. But a tight victory for Mr. Trump would likely bring on a 5 per cent to 10 per cent decline for stock markets in North America, he said.

While markets have historically favoured Republican candidates, strategists generally agreed that a win for Mr. Trump would introduce lingering uncertainty in global markets.

"If I could contrast the two, status quo is Clinton – good for markets. Uncertainty is Trump – bad for markets," Mr. Bourdon said.

"A Trump victory would be certain to surprise markets and generate a global uncertainty shock," said a report late Tuesday from Paris-based bank Société Générale.

In one of many breaches with tradition during the election campaign, Mr. Trump accused the U.S. Federal Reserve and chairperson Janet Yellen of keeping interest rates low for political reasons, a charge that Ms. Yellen emphatically denied. 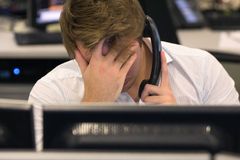 Canadian dollar a ‘double loser’ as Trump turmoil takes hold
June 5, 2017
Follow Eric Reguly and Jacqueline Nelson on Twitter @ereguly @j2nelson
Report an error Editorial code of conduct
Due to technical reasons, we have temporarily removed commenting from our articles. We hope to have this fixed soon. Thank you for your patience. If you are looking to give feedback on our new site, please send it along to feedback@globeandmail.com. If you want to write a letter to the editor, please forward to letters@globeandmail.com.
Comments