Hurricane Sandy has handed President Barack Obama an unprecedented election-eve opportunity to show his mettle in a time of crisis, forcing his Republican rival off the campaign trail as the commander-in-chief leads the response to an unfolding disaster.

Only a week before the Nov. 6 election, with the President and Mitt Romney essentially tied in the polls, Mr. Obama's handling of Sandy could clinch his victory or seal his demise.

As the storm cut a swath up the U.S. coast from North Carolina to Maine, and inland to Ohio and West Virginia, Mr. Obama owned the political spotlight but also bore the burden of getting the response right.

"This is Obama's crisis to handle," said Princeton University political science professor Julian Zelizer. "If he handles it well and looks like an assured leader, it's clearly going to be a plus for him."

Mr. Obama and Mr. Romney cancelled campaign rallies on Monday and for the duration of the massive storm that had at least 10 states declaring a state of emergency even before it made landfall in New Jersey at about 8 p.m. EDT.

"The election will take care of itself. Right now, our No. 1 priority is to make sure that we are saving lives," Mr. Obama insisted during a Monday briefing on storm preparations at the White House "The great thing about America is when we go through tough times like this, we all pull together."

Analysts who have studied the political implications of natural disasters were uncertain of Sandy's impact on the presidential race, since there are no recent precedents of a storm of this magnitude so close to election day. An assured response by Mr. Obama could earn him gratitude from voters. But the storm could also spark negative emotions among them.

The cancellation of early voting in states affected by the storm throws a wrench in the Obama campaign's strategy of getting as many of its voters as possible to the polls before election day. That effort is now on hold in states directly in the storm's path, including the key swing state of Virginia.

Analysts expect the storm will also lead to lower turnout in storm-ravaged states, especially among low-income voters who tend to vote Democratic. Cleaning up from the storm will take precedence over going to the polls.

Storm-weary voters who do show up, meanwhile, could take out their frustration on Mr. Obama.

"If you're upset because your power's been off and your food's gone bad, you may also be more likely to think about the things that make you upset about the President," said Andrew Healy, an economics professor at Loyola Marymount University in Los Angeles who researches voting behaviour.

Mr. Obama had travelled to Florida on Sunday for a Monday rally there with Bill Clinton. He instead flew back to Washington //on Monday morning// to deal with the storm.

After holding a campaign rally on Monday morning, Mr. Romney cancelled his events at least until Wednesday "out of sensitivity" for those in the storm's path.

However, his campaign was forced to defend its candidate against suggestions that, as president, Mr. Romney would dismantle the Federal Emergency Management Agency (FEMA), the organization that oversees the response to hurricanes and compensates disaster victims.

In a 2011 Republican debate, Mr. Romney answered a question about FEMA by saying he favoured turning more federal responsibilities over to the states and the private sector. But on Monday, his campaign brushed off suggestions be would abolish the agency.

"As the first responders, states are in the best position to aid affected individuals and communities, and to direct resources and assistance to where they are needed most. This includes help from the federal government and FEMA," the campaign said in a statement.

While FEMA is often the target of public anger – as it was during Hurricane Katrina in 2005 – it is seen as a critical link in disaster response by voters in states most often affected by hurricanes, such as Florida, a state Mr. Romney needs to win next week.

Sandy could also upend plans by the Romney campaign to bombard voters with ads during the final days of the campaign. While storm coverage draws big ratings – as long as there is power – viewers might be turned off by political pitches during a crisis.

Empirical research shows that politicians can benefit from their management of disasters. In 2002, the take-charge response of Germany's Gerhard Schroeder to flooding of the Elbe River revived his sagging political prospects. Behind in the polls when the flooding started, Mr. Schroeder's left-leaning coalition won easily six weeks later.

American voters, however, have only one week to decide whether Mr. Obama's disaster-management skills make him worthy of re-election.

"I can't think of a case where we've seen what could be such a shock to voters' emotions so close to an election," Prof. Healy said. "There is no time to digest [the crisis] here. That distance just isn't going to be there this time." 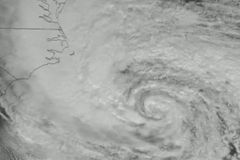 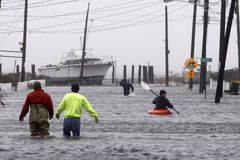