The pressure is on Mitt Romney to turn the first presidential debate on Wednesday in to a campaign reset moment, as polls show the Republican candidate trailing U.S. President Barack Obama in key battle ground states.

Mr. Romney is no stranger to the debate format. He used the 20 Republican debates to help clinch the presidential nomination – and it comes as no surprise that the Obama team is studying those debates for clues.

What they will find is the many sides of Mitt Romney – quick on his feet, sharp and sometimes not-so-serious. He can quote Seinfeld character George Costanza and then minutes later deliver an efficient takedown of his opponent. The question is, which Mitt Romney will show up Wednesday night?

Mr. Romney systematically focused on the former Pennsylvania senator's voting record, depicting him as a Washington D.C. insider and linking him to increased government spending.

"When I was fighting to save the Olympics, you were fighting to save the Bridge to Nowhere," said Mr. Romney, referring to a Congress-funded project – and symbol of 'pork barrel' politics – that proposed connecting mainland Alaska to an island with a handful of inhabitants.

Mr. Romney's most outlandish attack was to prosecute Mr. Santorum for being responsible for the passage of President Obama's signature health care law because of his previous support for Republican senator who later became a Democrat and voted in favour of Obamacare.

Visibly irritated by a claim made by Texas Governor Rick Perry about his healthcare plan, Mitt Romney extended his hand and offered to make a $10,000 bet that, in fact, Mr. Perry's claim was false. The offer of such a bet fuelled the image of a wealthy and out-of-touch candidate.

In another debate, when asked about whether he would follow the example of his father, who released 12 years of tax returns when the ran for president in the 1960s, Mr. Romney said, "Maybe."

His flippant reply and accompanying chuckle hit the wrong note on a question the candidate must have known was coming.

In the live debate format, there is always the chance of an unexpected question.

But few questions perplexed Mitt Romney more than the one put to him by ABC News' George Stephanopoulos about contraception (skip ahead to 32:40 to watch) and whether states should have the right to ban it.

The candidate described the moderator's question as a "kind of silly thing" and ended a lengthy, meandering answer with an off-the-cuff remark, to great applause: "Contraception, it's working just fine. Leave it alone."

Looking befuddled and taking a jab at the moderator won't cut it during a live presidential debate. But all preparation aside, the incident highlights the potential for a question to throw the candidate off his stride.

When his Republican leadership rivals started focusing on his tenure at Bain Capital, Mitt Romney, whose net worth is estimated at $250 million, told moderator Brian Williams of NBC News during a Florida debate, that he was surprised to see other candidates "pick up the weapons of the left and start using them to attack free enterprise."

But it was Mr. Romney's steadfast, 'no apology' stance that was most memorable: "I will not apologize for having been successful. I did not inherit what my wife and I have," he said in his defense of his success and of free enterprise.

An able CEO who will guide America to better jobs growth is something that resonates with voters. Sounding defensive about his wealth on the presidential debate stage resonates for the wrong reasons.

The question put to Mitt Romney about Newt Gingrich had the former Massachusetts governor laughing openly even as the question was being asked.

The question paraphrased a statement made by Mr. Gingrich, in which he claimed to be more conservative and more electable than Mr. Romney or any other candidate.

Mitt Romney laughs easily – but perhaps sometimes too easily. The effect is awkward.

Mitt Romney is polished and presidential during televised debates. His preparation for the first televised presidential debate on Wednesday in Denver, Colorado against Mr. Obama will showcase a certain sharpness that comes from practice.

Mr. Romney is more than a formidable opponent – he is capable of delivering a defining moment.

After losing the South Carolina primary, and with his back against the wall, Mr. Romney bounced back and demolished his surging rival Newt Gingrich on the debate stage.

"But have you checked your own investments?" Mr. Romney asked Mr. Gingrich when the former speaker of the House of Representatives tried to draw attention to Romney investments in mortgage giants Freddie Mac and Fannie Mae.

When CNN moderator John King asked Mitt Romney what he thought was the greatest misconception about him, the candidate starting answering with what sounded like a pre-prepared closing debate statement.

Mr. King jumped in to remind Mr. Romney to answer the question put to him.

"You ask the questions you want; I give the answers I want," Mr. Romney said.

In the first U.S. presidential debate, will Romney deliver under pressure?
October 1, 2012 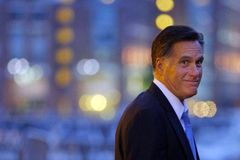 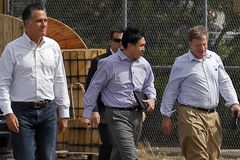