As the furor continues over President Donald Trump's reportedly vulgar remarks on immigration, the White House added a new element to the public debate over who should be allowed into the United States.

On Tuesday, the Trump administration released a 10-page report that highlighted instances in which foreign-born residents were convicted of terrorism-related offences or involved in honour killings and female genital mutilation.

The report is part of a long-running effort by the Trump administration to frame the debate over immigration policy as a question of public safety and to portray immigrants and refugees as potential threats.

It came as legislators were racing to avoid a possible government shutdown on Friday and as hopes faded of reaching a deal this week to resolve the status of hundreds of thousands of immigrants brought to the United States illegally as children.

It called for an end to family-based migration and the elimination of a lottery program that awards 50,000 permanent-resident visas each year to people from countries that are underrepresented in immigration to the United States.

The future of such policies was at the heart of a meeting last week at the White House in which Mr. Trump questioned the desirability of immigrants from "shithole" countries in Africa and called for Haitians to leave the United States.

Facing criticism at home and abroad, Mr. Trump said a day later that he did not use that exact language. Two of the Republican senators who were at the meeting said at first that they could not recall the exchange, then publicly supported the President.

On Tuesday, Kirstjen Nielsen, the Secretary of Homeland Security, who was also at the meeting, testified before Congress that she "did not hear that word used," but later allowed it was "possible" Mr. Trump had used either the term "shithole" or "shithouse" during a "very impassioned" conversation.

Mr. Trump has ignored calls from the African Union to retract his remarks and apologize. On Tuesday, he rejected reports that he had expressed a preference for immigrants from places such as Norway at last week's meeting. "I want them to come in from everywhere – everywhere," he told reporters.

In a series of tweets earlier in the day, Mr. Trump struck a different tone. A wall is needed at the "VERY DANGEROUS SOUTHERN BORDER," he wrote, "to help stop the massive inflow of drugs pouring into our country!" He also called for a merit-based immigration system and the elimination of the "dangerous" visa lottery program.

Tuesday's report, released by the departments of Justice and Homeland Security, examined the convictions for international terrorism-related offences in federal court from Sept. 11, 2001, through the end of 2016. It found at least 549 such convictions and determined that 73 per cent of those convicted were born outside the United States (54 per cent were U.S. citizens, however).

The data indicate fundamental flaws in the immigration system, said a senior administration official who was authorized to discuss the report on background during a conference call. People were admitted to the United States who were not likely to assimilate and thrive, he said.

The official praised countries such as Australia and Canada for awarding points to would-be immigrants for certain qualifications or attributes. The focus of the U.S. system should be promoting assimilation, he said, not bringing in individuals or their children who could eventually take up arms against the United States.

The report did not consider domestic terrorist activity by people born in the United States. A report from the Government Accountability Office says far-right extremists were responsible for 106 fatalities between Sept. 12, 2001, and the end of 2016. Radical jihadi extremists were responsible for 119 deaths, but 49 were in a single attack: the mass shooting in Orlando, Fla., by Omar Mateen, who was born in the United States.

Alex Nowrasteh, an immigration analyst at the Cato Institute, a libertarian think tank in Washington, said Tuesday's report was "obviously a very strained effort." The framing of the issue "is meant to scare people" but "you just cannot trick these numbers enough to make it seem dangerous. There just aren't that many foreign-born terrorists."

The production of the report was mandated in a less-noticed provision of Mr. Trump's travel and immigration ban that ordered the government to generate such statistics within six months. The senior administration official acknowledged the report was overdue, but said the timing of the release was coincidental. The report also included a discussion of honour killings and female genital mutilation in the United States. It remains unclear how many such incidents were perpetrated by foreign nationals, the administration said.

Mr. Trump has condemned U.S. immigration policy for years, and especially since a terrorist attack in New York last October killed eight people. The alleged perpetrator, Sayfullo Saipov, is an Uzbek immigrant who entered the United States in 2010 through the visa-lottery program. Mr. Trump has said that Mr. Saipov brought in "22 to 24" of his relatives, without citing any evidence. Immigration experts say such a claim is hard to square with current law. 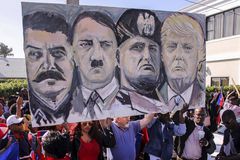