In a stunning and abrupt move, U.S. President Donald Trump fired James Comey, the director of the Federal Bureau of Investigation and the man responsible for leading a criminal investigation into possible collusion between Mr. Trump's election campaign and Russia.

The ouster of the nation's top law-enforcement official thrust the country into a moment of high political tension four months into the new administration. It marks just the second time in the FBI's history that a president has exercised his authority to remove the bureau's director.

Mr. Trump told Mr. Comey he was fired, effective immediately, in a brief letter delivered Tuesday. The dismissal was necessary in order to restore "public trust and confidence" in the FBI's mission, Mr. Trump stated. The President said that he agreed with the judgment of senior Justice Department officials, who had determined that Mr. Comey could no longer "effectively lead" the agency.

Mr. Trump on Wednesday defended the move, blasting Democratic critics who decried the decision and vowing to replace Mr. Comey with someone "far better."

"Comey lost the confidence of almost everyone in Washington, Republican and Democrat alike. When things calm down, they will be thanking me," Mr. Trump wrote in a series of posts on Twitter Wednesday morning.

Mr. Comey is respected for his integrity but also the subject of controversy. His handling of an FBI probe into former secretary of state Hillary Clinton's e-mail practises earned him the ire of Democrats and Republicans alike.

Mr. Rosenstein sharply criticized Mr. Comey's decision to hold a press conference about the Clinton probe in July of 2016, and to send letters to Congress on the matter in the final days before the presidential election.

They likened it to president Richard Nixon's decision to fire the independent special prosecutor overseeing the Watergate investigation, which led to the resignations of the top two officials at the Justice Department – an episode known as the Saturday Night Massacre.

To fire Mr. Comey for conduct that occurred months ago just as the Russia probe intensifies raises red flags, Democrats said. "The first question the administration has to answer is, 'Why now?'" Senate Minority Leader Chuck Schumer said. "Were these investigations getting too close to home for the President?"

Democrats called for the Justice Department to immediately appoint an independent special prosecutor to oversee the probe into possible co-ordination between advisers to Mr. Trump's campaign and Russia to influence the U.S. election.

Mr. Comey first learned of his dismissal from news reports while in Los Angeles, The New York Times reported. The paper said Mr. Comey was speaking to agents at the FBI's Los Angeles bureau when the news of his termination appeared on television screens behind him.

In March, Mr. Comey confirmed in a public hearing that the FBI was investigating links between Mr. Trump's team and the Kremlin. Russia engaged in an unprecedented bid to interfere in the U.S. election and defeat Ms. Clinton, according to U.S. intelligence agencies. For Mr. Trump, firing Mr. Comey is fraught with risks. The move could intensify public worry about the course of the Russia investigation, while igniting concerns that Mr. Trump is seeking to use his power to sideline a potential threat.

Mr. Trump has ridiculed the FBI investigation, as well as concurrent congressional investigations, as a "hoax" and has denied that his campaign was involved in Russia's election meddling. In his letter to Mr. Comey, he asserted that the FBI director had informed him "on three separate occasions that I am not under investigation."

The White House said that the search for a new FBI director would begin immediately. John Dean, the former White House counsel to President Richard Nixon, said in an interview with The Globe and Mail that much depends on the person Mr. Trump chooses as Mr. Comey's replacement. "We don't know how they'll handle this," Mr. Dean said. "Everything with the Trump administration is uncharted territory – everything."

Some lawmakers welcomed the news of Mr. Comey's dismissal. "Given the recent controversies surrounding the director, I believe a fresh start will serve the FBI and the nation well," said Republican Lindsey Graham of South Carolina, chairman of a Senate judiciary subcommittee investigating the Russian campaign interference.

Only once before in the bureau's 93-year history has a president fired the FBI director. In 1993, Bill Clinton sacked William Sessions after alleged ethical lapses by Mr. Sessions that occurred before Mr. Clinton took office. Clinton administration officials urged Mr. Sessions to resign.

Mr. Comey, 56, was nominated by president Barack Obama in 2013 to a 10-year term at the helm of the FBI. Praised by both parties for his independence, Mr. Comey has spent three decades in law enforcement.

But his prominent role in the 2016 presidential campaign raised questions about his judgment and impartiality. Though the FBI did not recommend charges against Ms. Clinton for mishandling classified information, Mr. Comey publicly blasted her decision to use a personal e-mail account and private internet sever.

Ms. Clinton has partly blamed her election loss on Mr. Comey's disclosure to lawmakers less than two weeks before election day that the e-mail investigation would be revisited. He later said the FBI, once again, had found no reason to bring any charges.

Ms. Clinton's advisers were stunned by Mr. Trump's decision on Tuesday. "I was as disappointed and frustrated as anyone at how the e-mail investigation was handled," Robby Mook, Ms. Clinton's campaign manager, wrote on Twitter. "But this terrifies me."

Over the course of his career, Mr. Comey gained a reputation as a tenacious prosecutor and principled public servant. In a legendary confrontation in 2004, Mr. Comey – then a senior official at the Justice Department under George W. Bush – thwarted a White House effort to reauthorize a warrantless wiretapping program that Mr. Comey did not believe was lawful.

FBI’s Comey 'mildly nauseous' to think he could have influenced election
May 3, 2017
The man on a collision course with Trump: FBI director James Comey
May 17, 2018 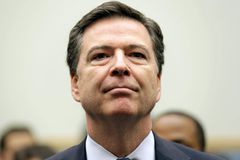 Journalist says she’s found FBI director Comey’s stealth Twitter account
April 15, 2017
Follow Joanna Slater and Adrian Morrow on Twitter @jslaternyc @adrianmorrow
Report an error Editorial code of conduct
Due to technical reasons, we have temporarily removed commenting from our articles. We hope to have this fixed soon. Thank you for your patience. If you are looking to give feedback on our new site, please send it along to feedback@globeandmail.com. If you want to write a letter to the editor, please forward to letters@globeandmail.com.
Comments