Jared Kushner should not have been able to say it with a straight face – not mere days after Donald Trump's attempt to run his country the way he ran his private business contributed to a health-care debacle that was the most humiliating defeat for his administration thus far.

"The government should be run like a great American company," Mr. Kushner said recently in explaining his new role running a White House office that has the task of making the U.S. bureaucracy more efficient and less stagnant. "Our hope is that we can achieve successes and efficiencies for our customers, who are the citizens."

The enduring appeal of this hoariest of political clichés – some variation of making government run more like a business – is such that it surely seemed to Mr. Trump's admirers like confirmation of the real-world expertise he seduced them with on the campaign trail.

But even critics of Mr. Trump, who lined up to point out that every new administration makes similar noises at its outset and then winds up with little to show for them, let Mr. Kushner and his father-in-law off easy.

If they are just empty words, as they often were previously, they may indeed merit little more than casual dismissal. But matters get more dangerous when people running governments actually believe they can just apply whatever worked for them in the private sector – something worth considering on this side of the border about now as precisely such a true believer, in the form of Kevin O'Leary, competes to leader the Conservative Party.

Mr. Trump is already providing cautionary tales. A management style that encourages factions in his employ to compete against each other for his attention is a proven recipe for chaos in government. His blustery approach to negotiations has yet to show many signs of working with foreign leaders. Most consequentially, so far, a lack of attention to detail, which could be overcome when delegating to underlings at his companies, proved devastating in the first legislative test of his administration – the President unable to sell fellow Republicans on his health-care plan, in part because he did not know details about the bill.

Mr. Trump was not a typical business person, his success in recent years mostly involved licensing his name for development projects. But if that is too big a caveat, consider a brief behind-the-scenes mini-trend in this country that was even more instructive than front-line flame-outs of business types such as former Ottawa mayor Larry O'Brien or the Parti Québécois' Pierre Karl Péladeau.

A few years ago, the prime minister and the premiers of two of the largest provinces turned to people with much more corporate than political experience to run their offices – Stephen Harper to Onex's Nigel Wright, Dalton McGuinty to former bank executive and Infrastructure Ontario chief executive David Livingston, Alison Redford to corporate lawyer Farouk Adatia. The hope, as I wrote then in an unfortunately optimistic column, seemed to be that their perspective and discipline would help with agenda implementation that could stymie those more immersed in government and political culture.

Mr. Wright, who seemed to succeed more than the others in day-to-day management, lost his job and caused political grief because he wrote a personal cheque to make a problem go away – something he might more easily have got away with in the private sector. Mr. Livingston adopted a CEO model (in which he delegated heavily), but it ended with being criminally charged in a scandal that came to define the premier he served. Mr. Adatia escaped comparatively unscathed, but was still accused by other Alberta Progressive Conservatives of aloofness and a lack of political antennae that may have contributed to Ms. Redford's exit.

The more time one spends in or around governments, the more obvious it is why attempts to bring a Wall Street or Bay Street mentality to them can end badly.

Ethical scrutiny, for all that entrepreneurs-turned-politicians paint capital cities as swamps, is greater than in the corporate world. And because governments get more attention for failures than quiet successes, tolerance for risk is often lower.

Healthy tension with career civil servants can turn unhealthy if politicians and their staffs do not make honest efforts to understand and engage bureaucrats. And the overarching reality is that, in government, goals and outcomes are more complex, abstract and intuitive than when they can be measured by profit margins.

Business titans can triumph in politics – a Michael Bloomberg in New York, a Danny Williams in Newfoundland. And public-sector culture is often stagnant, and benefits from outside eyes. But the disruptors' success usually involves a willingness to admit (privately) what they do not know about government, and trust people who understand it better.

The more government and other institutions sink in the public's estimation, the more that those promising to confront their culture might find a receptive audience. The more, too, that we are liable to be reminded that ignorance of what they are getting into does neither them nor us any favours. 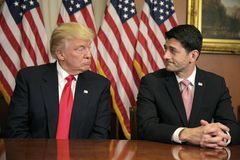 Trump's NAFTA goals: ‘What’s yours is mine and what’s mine is mine’ Subscriber content
April 15, 2017
Can Donald Trump deliver? Markets aren’t so sure now Subscriber content
April 15, 2017
Follow Adam Radwanski on Twitter @aradwanski
Report an error Editorial code of conduct
Due to technical reasons, we have temporarily removed commenting from our articles. We hope to have this fixed soon. Thank you for your patience. If you are looking to give feedback on our new site, please send it along to feedback@globeandmail.com. If you want to write a letter to the editor, please forward to letters@globeandmail.com.
Comments