Donald Trump wasted no time wading into one of the world's thorniest foreign-policy areas Sunday, speaking by phone with Israeli Prime Minister Benjamin Netanyahu as the new U.S. President looks to tighten ties with Israel and make a sharp turn away from his predecessor's stand on settlements and the future location of the U.S. embassy.

Mr. Trump told reporters at the White House Sunday that his conversation with Mr. Netanyahu was "very nice"; he would not say if they discussed the embassy move. Earlier in the day, Mr. Trump's spokesman, Sean Spicer, said in a statement that the administration was "at the very beginning stages of even discussing" the move.

Mr. Trump promised during the campaign to move the embassy in Israel from Tel Aviv to Jerusalem – an act certain to anger Arab countries in the region, including American allies Saudi Arabia and Jordan, which regard east Jerusalem as occupied land. Palestinian Authority president Mahmoud Abbas hunkered down with Jordan's King Abdullah II in Amman Sunday to co-ordinate a united front against any move to the embassy.

Globe editorial: The end of the two-state option could kill any chance of peace for Israel

Explainer: The two-state solution: What it is and why it hasn't happened

In the opening days of his administration, Mr. Trump is showing that he is willing to jettison established U.S. foreign policy and upend free-trade agreements as he pursues his "America First" worldview.

The President also announced Sunday he would start renegotiating the North American free-trade agreement with Mexico and Canada before the month is out. And his first meeting with a world leader, scheduled for this week, will see him sit down with British Prime Minister Theresa May – an opportunity for him to reaffirm his backing for Britain's exit from the European Union, but also a possible point of friction over Mr. Trump's dislike of NATO, an important check against Russian expansionism.

At a ceremony to swear in his White House staff Sunday afternoon, Mr. Trump said he would soon meet with Canadian Prime Minister Justin Trudeau and Mexican President Enrique Pena Nieto and kick off his promised reopening of NAFTA.

"We're going to start renegotiating on NAFTA, on immigration and on security at the border," Mr. Trump declared. The President has arranged a Jan. 31 meeting with Mr. Pena Nieto; it was unclear when he would meet Mr. Trudeau, although the pair spoke by phone Saturday.

Renegotiating or tearing up free-trade deals, in a bid to stop American companies from manufacturing products in other countries, was at the heart of Mr. Trump's presidential campaign.

Mr. Trump's tête-à-tête with Ms. May Friday at the White House could pave the way for a coalition of protectionists. While former president Barack Obama had warned ahead of last June's referendum on leaving the EU that Brexit would put Britain at the "back of the queue" for negotiating a trade deal with the United States – his preference was to get a deal with the EU instead – Mr. Trump has praised Brexit and promised to move "very quickly" on a trade deal with Britain.

"I'm a big fan of the U.K. We're gonna work very hard to get it done quickly and done properly. Good for both sides," he said in a Times of London interview last week, describing the EU as "a vehicle for Germany. That's why I thought the U.K. was so smart in getting out."

Mr. Trump and Ms. May were also expected to discuss the North Atlantic Treaty Organization, which Mr. Trump has said is obsolete and paid for disproportionately by the United States.

But it is the Middle East where Mr. Trump could run into trouble early in his presidency.

On Sunday, Mr. Netanyahu told cabinet ministers he would lift restrictions on the controversial construction of new settlement housing units in east Jerusalem – a sign his government may be feeling emboldened by Mr. Trump's pro-Israel line.

Statements from the White House and Mr. Netanyahu's office after the phone call suggested Mr. Trump would follow through on his promise to take a hard line on Iran.

Mr. Trump's campaign attacks on the Iran pact – which he once described as "the worst deal ever negotiated" and pledged to "dismantle" – also draw him closer to Israel and further from the UN. Under the deal, the UN and the EU agreed to lift sanctions on Iran in exchange for Iran cutting back its nuclear program.

The White House's description of the call said Mr. Trump and Mr. Netanyahu agreed to address "the threats posed by Iran" and Mr. Trump "affirmed his unprecedented commitment to Israel's security."

Mr. Netanyahu's office said the pair had a "very warm conversation," and Mr. Trump invited Mr. Netanyahu to meet him next month in Washington.

"The two leaders discussed the nuclear deal with Iran, the peace process with the Palestinians and other issues," the Prime Minister's office said, pledging there would be "no daylight between the U.S. and Israel."

The new President also has a big week ahead on the domestic-policy front. He is being pushed to address how he will keep his campaign promise to repeal Obamacare without stripping millions of people – likely including a large chunk of his supporters – of health insurance.

He is also trying to push through his appointments to cabinet and the heads of various agencies, which must be approved by the Senate. The Democrats have used procedural manoeuvres to hold up some appointments, including that of putative CIA director Mike Pompeo.

On Thursday, Mr. Trump will attend a Philadelphia retreat for GOP senators and House members in a bid to forge closer bonds with Congress.

Despite the hefty agenda for his first week on the job, Mr. Trump spent much of his first 48 hours as President obsessing over the more trivial detail of the size of the crowd at his inauguration.

On Saturday afternoon, Mr. Trump used a speech to CIA officers at the agency's headquarters in a Washington suburb to falsely claim the media had made the turnout at his swearing-in look smaller than it actually was.

A pair of aerial photographs showed much larger gaps in Mr. Trump's crowd, particularly near the back, than in the crowd for Mr. Obama's first inauguration in 2009.

The President, who described reporters as "among the most dishonest human beings on Earth," also claimed that the media had made up his public feud with the CIA. Just two weeks ago, Mr. Trump compared the country's intelligence agencies with "Nazi Germany," after a document alleging ties between his campaign and the Russian government was published by Buzzfeed.

Later in the day, Mr. Spicer devoted most of his first news conference to berating reporters and repeating Mr. Trump's inflated claims about crowd size.

On Sunday morning, Mr. Trump took aim at the women's march in Washington, which appeared to have drawn larger crowds to the National Mall than his inauguration.

"Watched protests yesterday but was under the impression that we just had an election! Why didn't these people vote? Celebs hurt cause badly," Mr. Trump tweeted.

Presidential counsellor Kellyanne Conway then appeared on NBC's Meet the Press, where she coined a novel description – "alternative facts" – for the administration's false statements on crowd size.

"Don't be so overly dramatic about it," she said. "You're saying it's a falsehood, and they're giving, Sean Spicer our press secretary, gave alternative facts." 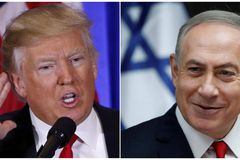 Trudeau and Trump want to meet ‘soon,’ but no word on when
January 21, 2017
Follow Adrian Morrow on Twitter @adrianmorrow
Report an error Editorial code of conduct
Due to technical reasons, we have temporarily removed commenting from our articles. We hope to have this fixed soon. Thank you for your patience. If you are looking to give feedback on our new site, please send it along to feedback@globeandmail.com. If you want to write a letter to the editor, please forward to letters@globeandmail.com.
Comments