The testimony – given to the House intelligence committee by Glenn Simpson, co-founder of the commercial intelligence firm Fusion GPS – follows statements attributed to Mr. Trump's former chief strategist, Stephen Bannon, who predicted the Trump-Russia investigation headed by special counsel Robert Mueller would zero in on allegations of money laundering.

The House committee heard the testimony in November and voted on Thursday to make transcripts of the two-day hearing public. Mr. Simpson's separate testimony to the Senate judiciary committee was also made public this month, but did not delve into Mr. Trump's Canadian dealings.

Mr. Simpson was viewed as a key witness because of his firm's role in hiring former British spy Christopher Steele to write an opposition research report on Mr. Trump that concluded members of the then-president candidate's inner circle had colluded with the Russian government during the 2016 election campaign. Mr. Steele's report also stated the Kremlin possessed compromising information about Mr. Trump that could make the President susceptible to blackmail.

Mr. Trump has repeatedly criticized the Steele dossier, calling it "discredited and phony." Both he and the Kremlin have denied there was any collusion during the 2016 campaign.

Mr. Simpson defended Mr. Steele's work and said his own research – conducted after his firm was hired in early 2016 by political opponents of the then-long-shot Republican candidate – found Mr. Trump had a long and tangled relationship with rich Russians whom Mr. Simpson described as members of organized crime.

In the early 2000s, Mr. Trump was being routinely rejected for bank loans in the United States – a serious problem for any real-estate developer. He was rescued, Mr. Simpson said, by "alternate financing" in the form of cash from rich Russians who signed agreements to purchase condo units in Trump-branded buildings in Toronto and elsewhere.

While many of those presale agreements were never consummated, Mr. Simpson said, the appearance they gave of high demand for the properties allowed the Trump Organization to raise credit it might otherwise have been denied.

"The guys connected to the Toronto project are Russian Mafia, too. And, in fact, there's Toronto-based Russian Mafia guys who are involved in the Panama project," Mr. Simpson said in his testimony, referring to the Trump Ocean Club in Panama City.

Both Mr. Birshtein and Mr. Shnaider, via his lawyer, have declined to answer questions from The Globe and Mail about their dealings with Mr. Trump. The two men are now estranged.

Mr. Simpson said it was well-known that Russia's top businessmen and organized crime bosses alike answered in the end to Russian President Vladimir Putin. "If people who seem to be associated with the Russian Mafia are buying Trump properties or arranging for other people to buy Trump properties, it does raise a question about whether they're doing it on behalf of the government," he said.

The Trump International Hotel and Tower, which stands at the corner of Bay and Adelaide streets in Toronto's financial district, was plagued by controversies from the moment Mr. Trump and Mr. Shnaider wielded shovels side by side to break ground on the project in 2007.

The hotel, which finally opened in 2012, faced lower-than-expected occupancy rates and lawsuits from disgruntled shareholders. It came under new management last year, which decided to take Mr. Trump's name off the building and rebrand it the Adelaide Hotel Toronto. 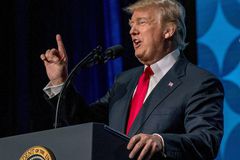 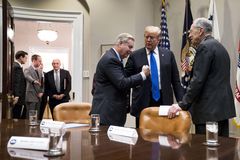