President Donald Trump will leave U.S. troops in Afghanistan – and has opened the door to sending in more – in a bid to prop up the country's flagging government against the surging Taliban.

The decision, announced on Monday evening at Fort Myer military base near Washington, is a deviation from Mr. Trump's previously expressed non-interventionist foreign policy. Before he became President, he even explicitly called for his country to pull out of Afghanistan entirely.

"The American people are weary of war without victory," Mr. Trump said, acknowledging the hefty price the United States has paid over 16 years of often fruitless struggle in the country. He conceded that he had once wanted to pull U.S. troops out of the war, but concluded that doing so would allow terrorist groups to take over.

And the President tried to square the new push into Afghanistan with his "America first" agenda, arguing that his aim is purely to ensure U.S. security, not engage in foreign adventurism as former president George W. Bush did when he invaded Iraq.

"We are not nation-building again," he said. "We are killing terrorists."

Mr. Trump did not say how many troops he was prepared to dispatch to Afghanistan, but Fox News, citing an unnamed senior official, put the figure at 4,000, in addition to the 8,400 currently there. He also said that in the future, he would be prepared to consider a political settlement in Afghanistan, including with the Taliban.

"Our troops will fight to win. From now on, victory will have a clear definition: attacking our enemies, obliterating ISIS, crushing al-Qaeda, preventing the Taliban from taking over the country, and stopping mass terror attacks against Americans before they emerge," he said.

Mr. Trump's views on Afghanistan have evolved over the years. At first, he advocated a straight withdrawal, tweeting in November, 2013: "We have wasted an enormous amount of blood and treasure in Afghanistan. Their government has zero appreciation. Let's get out!" The next year, he berated president Barack Obama for deciding to leave troops in the country indefinitely rather than pulling out as planned.

By the time he launched his presidential campaign, however, Mr. Trump conceded that while he personally disliked the war, he felt it was necessary to stay in Afghanistan to prevent it falling to the Taliban.

In an interview with CNN in October, 2015, he described invading Afghanistan as "a mistake," but said he "would leave troops there begrudgingly" because otherwise the country would "collapse in about two seconds." In March, 2016, in the midst of the presidential primaries, he said during a debate that "you have to stay in Afghanistan for a while."

As President, Mr. Trump has also unexpectedly shown himself willing to step into foreign conflicts. In April, he ordered a surprise missile strike on one of Syrian President Bashar al-Assad's air bases after he was moved by photographs of civilians killed by sarin gas. And he has ratcheted up a war of words with North Korean leader Kim Jong-un.

The Afghanistan decision is also a victory for the generals in the President's administration after the firing of Steve Bannon as chief strategist.

Defence Secretary James Mattis and national security adviser H.R. McMaster, both career military men, are understood to have advocated for a U.S. strategy to keep fighting the war. Mr. Bannon's nationalist faction in the administration preferred pulling out the troops – and even floated the possibility of turning over the fighting to private contractors. The New York Times reported last month that Mr. Bannon unsuccessfully lobbied Mr. Mattis to hear a strategy crafted by Erik Prince, founder of private security firm Blackwater.

Gordon Adams, who was a national security official in the Clinton administration, cautioned against reading too much into Mr. Trump's decision. The President is too random and unpredictable, he said, to see a single move like this as part of any sort of larger policy plan.

"This guy does not fit any normal pattern. Even if he embraces something today, it may be different by tomorrow," said Prof. Adams, who teaches foreign policy at American University in Washington. "The consistent effort to normalize Donald Trump continues to amaze me."

In Mr. Trump's previous nationally televised address – a February speech to a joint session of Congress – for instance, the President declared that "the time for trivial fights is behind us." Since then, he has openly feuded, usually through Twitter, with various Republicans in Congress, his own administration and the media.

In Prof. Adams's view, the United States is not achieving much in Afghanistan and stays primarily as an exercise in face-saving.

Stephen Biddle, a defence policy scholar who has advised U.S. commanders in Iraq and Afghanistan, said a U.S. victory in Afghanistan would entail being able to dictate terms to the Taliban, but that the sort of modest reinforcement Mr. Trump appears to be signalling would not be enough to do that.

Prof. Biddle, who teaches political science and international affairs at George Washington University in Washington, said achieving a settlement in Afghanistan would also require political footwork, such as getting Congress onside with the possibility of making concessions to the Taliban.

"If we're not willing to lay the political groundwork for a real deal, then this is just keeping the war on life support to no identifiable purpose," he wrote in an e-mail.

Mr. Trump has reportedly expressed frustration over Afghanistan while seeming unable to decide what to do about it.

An NBC report described a wild meeting last month in the situation room of the White House during which Mr. Trump was supposed to determine a course of action on Afghanistan, but instead complained about the military's inability to win the war.

During the two-hour session, NBC cited unnamed sources as saying, Mr. Trump repeatedly told Mr. Mattis he should fire John Nicholson, the top U.S. general in Afghanistan; asked if the United States could take some of the country's minerals; and compared the advice he was receiving on Afghanistan to the situation of a New York restaurant in the 1980s, the 21 Club, which he said had lost money because of poor counsel from an overpriced consultant. Mr. Mattis emerged from the meeting visibly upset, NBC reported, and had to take a long walk to blow off steam.

Mr. Mattis told Congress in June the United States is "not winning" the war and that the Taliban was on the rise. The government of President Ashraf Ghani controlled just 57 per cent of the country late last year, down from 72 per cent a year earlier. 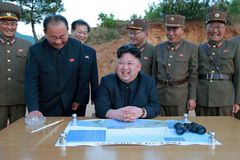 Frustrated by Afghan war, Trump suggests firing U.S. commander: officials
August 2, 2017
Top U.S. commander in Afghanistan launches special operations corps
August 20, 2017
Follow Adrian Morrow on Twitter @adrianmorrow
Report an error Editorial code of conduct
Due to technical reasons, we have temporarily removed commenting from our articles. We hope to have this fixed soon. Thank you for your patience. If you are looking to give feedback on our new site, please send it along to feedback@globeandmail.com. If you want to write a letter to the editor, please forward to letters@globeandmail.com.
Comments