For generations, as America's authoritarian rivals strutted their tanks, troops and jets through main thoroughfares in dramatic displays of strength, the United States watched from afar, but did not emulate.

Widely accepted as the world's mightiest, the U.S. military has no tradition of putting itself on parade like in Russia, North Korea or China. But President Donald Trump does not often stand on tradition. So Trump's directive to the Pentagon to draft options for a massive march reverberated across Washington on Wednesday like the thud of a discharged cannon, as lawmakers and military leaders mused about the cost, the risk and the purpose.

"People will wonder, 'Well, what are they afraid of now? What are they trying to prove?"' Del. Eleanor Holmes Norton, who represents the District of Columbia in Congress, said in an interview. "We don't have to show off to make a point."

It was a critique voiced by both Democrats and Republicans the day after The Washington Post revealed Trump wants an elaborate parade this year to rival the Bastille Day celebration in Paris that made a distinct impression on him in July. Democratic Sen. Dick Durbin called it a "fantastic waste of money," while Republican Sen. Lindsey Graham told CNN that the parade risked being "kind of cheesy and a sign of weakness" if it's just about showing off military muscle.

The president did not seem deterred, although his aides rushed to downplay the notion that it was anything beyond an idea Trump had floated "in a brainstorming session" to help Americans express gratitude and pride for the military. White House spokeswoman Sarah Huckabee Sanders said there had been no final decision. And Trump's legislative director said it was too early to even guess about potential costs, though it's assumed it would cost millions.

"We've been putting together some options. We'll send them up to the White House for a decision," said Defence Secretary Jim Mattis as reporters peppered him with questions at the White House. "The president's respect, his fondness for the military I think is reflected in him asking for these options."

In the nation's capital, officials were scrambling to identify potential implications for such a parade, such as whether D.C. streets could even accommodate heavyweight tanks and other equipment. On its official Twitter account, Washington's city council openly trolled the commander in chief, declaring that despite wintery weather, "DC Public Schools will open on time today. Sadly, the Giant Tank Parade is cancelled. Permanently."

Holmes Norton told The Associated Press that she was already preparing steps to ensure that "if Trump wants a parade, he pays for it." Still, she conceded there was little chance of blocking a parade permit from being issued, given the First Amendment right to free assembly.

Although U.S. troops commonly participate in parades on the Fourth of July and other holidays, especially those honouring veterans, the United States has never embraced raw displays of military power, such as North Korea's parading of ballistic missiles. The idea is that the world's pre-eminent military is strongest when its might is inferred, not shown off in boastful fashion or in an implicit threat to foreign powers.

"We have avoided doing this kind of display, in part to emphasize that contrast because this has been so commonplace in authoritarian countries," said Julian Zelizer, a presidential historian at Princeton University. "For some presidents, it's sometimes a strategic act: Speak quietly while carrying a big stick," as President Theodore Roosevelt famously advised.

The last time Washington saw anything similar to what Trump is considering was in June 1991, after the Gulf War, as Americans gave veterans of Operation Desert Storm a triumphant welcome home. Some 8,000 veterans marched along with tanks that trudged down a flag-festooned Constitution Avenue as fighter planes roared over the National Mall.

Some 800,000 gathered in the crowd, the U.S. Park Police said at the time. President George H.W. Bush declared it a "great day."

Although Trump's critics argued his parade idea was rooted in a need for self-aggrandizement, the White House said it was squarely an attempt to venerate America's military. Jonny Havens, a U.S. army veteran who said he served in Iraq, called that sentiment "right on."

"I trust President Trump, Defence Department, Secretary Mattis to do it in the right way, and do it in a way that makes sense and is cost effective," Havens said.

But Shaun Theriot-Smith, another Army veteran who served in Iraq and Afghanistan, said the idea smacked "of the very things we make fun of North Korea for."

"We had bombings in Kabul just last week," Theriot-Smith said. "We're not even sure what we're intending to celebrate here. We still have wars going on that we need to fight."

Trump first publicly floated his idea last September at a meeting with French President Emmanuel Macron, as he reminisced about watching France's Bastille Day military parade. He said the two-hour parade was a "tremendous thing for France and for the spirit of France," and said he wanted one on Pennsylvania Avenue in Washington on July 4 – grander than the one he saw in Paris.

When Trump first suggested the idea to top aides aboard Air Force One after the parade, staff debated the best time of year to have it, and noted the tanks in Paris had chewed up the city's pavement, throwing up chunks of concrete as they moved.

Trump, however, dismissed that concern, according to one person familiar with the conversation who spoke on condition of anonymity to discuss the president's thinking.

That's ok, Trump told them. We can fix the streets. 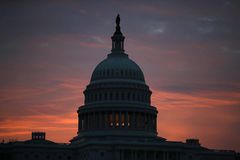