U.S. President Donald Trump's push to institute a temporary immigration ban has introduced unprecedented uncertainty into recruitment efforts by U.S. hospitals and universities, which say the administration is damaging the country's appeal as a destination for international talent.

The reverberations of the Trump administration's stand go well beyond the seven Muslim-majority countries targeted in the original order. Educators say students from a variety of countries have expressed concerns about their ability to complete their degrees or medical training in the United States and are seeking alternatives in places such as Canada and Britain.

Educational institutions, meanwhile, are grappling with a deep sense of uncertainty. In the short run, some hospitals and universities say they are reluctant to extend offers to highly qualified candidates from the seven countries – Iran, Iraq, Syria, Yemen, Libya, Somalia and Sudan – for fear the students will be unable to secure visas.

John Ibbitson: Trump may praise Canada's immigration model, but he would never adopt it

Cheryl Matherly, vice-president for International Affairs at Lehigh University, said that some departments at her university were struggling with this dilemma. "Do we take the top-choice student or do we take the second-choice student who's more likely to get in the country?" she said.

Universities were at the forefront of the opposition to Mr. Trump's original executive order, which was blocked last month by a federal appeals court. But the White House has vowed to issue a replacement as soon as this week.

The administration is reportedly considering a number of changes to prevent further legal setbacks: For instance, the new measure may target future visa holders rather than existing visa holders and will likely remove language interpreted to give priority to Christian refugees. The revised version could also change which countries are affected.

Atul Grover, executive vice-president of the Association of American Medical Colleges, said that his organization quickly realized that Mr. Trump's ban would be "potentially disruptive" both to this year's recruitment process and to long-term health care overall. "Our main focus has been getting the administration to not to do this to American patients and communities," he said.

The United States relies on recruiting foreign-trained doctors to meet a work-force shortage every year, said Dr. Grover, since there are more spots for hospital residents than there are graduates of American medical schools.

This year, as many as 1,000 doctors from the seven countries in Mr. Trump's original order are seeking spots in residency programs in the United States. Last week, hospitals submitted the lists of their preferred candidates to a national matching system and the results will be announced on March 17.

Jatin Vyas, the director of a prestigious residency program in internal medicine at Massachusetts General Hospital in Boston, said that there is widespread worry among international medical students. Dr. Vyas said that he had received e-mails from potential candidates in India and Pakistan asking what would happen to their medical training if their countries were added to the administration's list. "We try to provide some type of stability but we too are left with no good answers" in response to such queries, said Dr. Vyas.

His program decided to offer spots to two candidates from Iran and Iraq based purely on their qualifications with the knowledge that there may be visa-related delays or complications. The whole situation strikes Dr. Vyas as detrimental to the broader aims of medical education. "Up until this year, we've never had any significant hindrances in terms of being able to attract the best talent from all over the world," he said.

Some hospitals and educational institutions are deciding not to take the risk of extending offers to candidates from the seven countries out of fear that such a step will ultimately leave them shorthanded. Nasser Zawia, the dean of graduate education at the University of Rhode Island, said that faculty members recently sought his advice on whether to offer spots to promising applicants from countries affected by immigration ban, knowing the students might not be able to attend.

The immigration ban is part of a broader perception that the United States is becoming a hostile place for international students under the Trump administration, Ms. Matherly said. Lehigh runs a summer program on business and entrepreneurship which normally includes four or five participants from Mexico. This year, for the first time, there will be none. "Our Mexican partner made it very clear that students were choosing not to apply because they did not want to go someplace where they did not feel welcome," she said.

Ms. Matherly said that 55 Lehigh students were affected by the original ban. One doctoral student in engineering went home to Iran but is now unable to get his U.S. visa renewed. Another postdoctoral fellow had his visa cancelled in the chaotic implementation of the executive order. Faculty members are attempting to find him an alternative position in Canada.

Albert Teich, a professor at George Washington University who has studied the impact of visa restrictions on the scientific community, said the current situation reminds him of the years after the attacks of Sept. 11, 2001. Tighter visa regulations and the perception of an unwelcoming environment led to a decline in international students entering the United States and the cancellation of scholarly meetings.

The flow of international students later recovered, but the "lasting impact was on the reputation of the United States as a welcoming country," Prof. Teich said. "We're doing the same thing again right now – shooting ourselves in the foot." 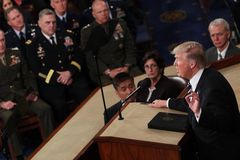