The Democratic Party's big moment has arrived – a three-day national convention with all the pageant, political celebrities and enthusiasm the party can muster heading in to a critical two-month period before the general election.

Charlotte, North Carolina, has welcomed nearly 6,000 delegates, plus thousands of supporters, volunteers and party officials – not to mention a small army of journalists from around the world for today's official start.

The convention will showcase party icons – President Bill Clinton – and rising stars. But it will be Michelle and Barack Obama's bookend speeches that will set the tone for the convention.

Kicking it off on Tuesday night will be the Obama who is viewed favourably by 66 per cent of Americans, a sixteen-point advantage over her husband, according to a Gallup survey.

First Lady Michelle Obama, who was recently described by the President's top aide David Axelrod as the campaign's " No. 1 surrogate ," tested the podium inside Time Warner Cable Arena, home of the Charlotte Bobcats basketball team, on Monday afternoon ahead of tonight's speech.

Ms. Obama's trajectory has been extraordinary. Seen as angry and un-American during the 2008 presidential campaign for her comment about her husband's campaign – "for the first time in my adult lifetime, I am really proud of my country" – Ms. Obama used the Democratic National Convention (DNC) later in the year to re-make her image.

"I love this country," she told the DNC audience in Denver, Colorado. Ms. Obama proved to be an effective speaker by introducing her husband and their family to a wider American audience – similar to the task Ann Romney performed at the Republican National Convention in Tampa Bay last week.

Ms. Obama humanized her husband and presented him as someone who held the same values as millions of Americans. The Obama daughters joined their mother on stage at the end of the speech while a large screen showed a satellite link-up with then-candidate Obama.

"How about Michelle Obama?" Mr. Obama asked the crowd. "Now you know why I asked her out so many times even though she said no. You want a persistent president."

But Americans have had four years to get to know the Obamas. Ms. Obama's task on Tuesday night will have to tackle why President Obama deserves another four years to focus on the economy.

Eight years ago, another unpopular president facing voter disappointment over costly wars and a struggling economy needed a First Lady's help during re-election.

Laura Bush's speech to the Republican National Convention "was widely regarded as a pivotal moment for a lot of people – particularly women, who were really on the fence about someone whom they perceived to be aggressive," says Anita McBride, former chief of staff to Ms. Bush, in an interview with The Hill.

Ultimately, every speech – including President Bill Clinton's on Wednesday night – will pave the way for the speech that matters most. On Thursday night, it will be President Obama's turn.

Mr. Obama has been centre stage for the last three Democratic National Conventions.

The then-Illinois state senator's speech at the 2004 convention in Boston – lamenting those who would "slice and dice" the U.S. in to Republican and Democratic states – still gives the party faithful goosebumps.

Four years later, Mr. Obama lamented the broken politics of Washington, D.C. and delivered a message of hope and change at the Democratic national convention in Denver, Colorado, before a crowd of 84,000 supporters.

The task this time around: fire up the party's grassroots in a close election where organizing voter turnout will be key; defend and explain his four years in office; and pivot – even if it's for one night – to a more positive message.

This week's DNC organizers and the Obama campaign will have to keep an eye on the weather.

No hurricane threat to this convention. But there were enough thunderclouds Monday to unleash several thunderstorms late in the afternoon, delaying flights, soaking the city and bringing an abrupt end to musician James Taylor's set at CarolinaFest – a festival celebrating North Carolina culture in place of what would have been the opening day of a four-day convention.

The rest of week will likely see more turbulent weather, which will not be a problem as most of the speeches will be inside the arena.

The two speeches that will be heard outdoors at the Bank of America Stadium on Thursday night: Vice President Joe Biden and President Barack Obama.

The Obama campaign says it has a contingency plan to move the final night of the convention indoors if there is a threat of more thunderstorms. 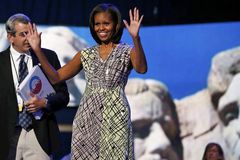 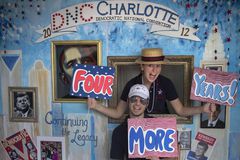 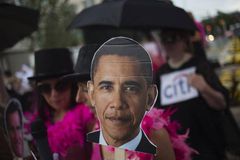 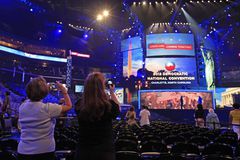 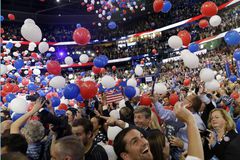 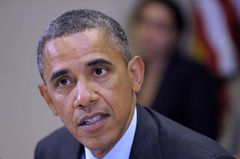