From continuing conflict in half a dozen states and the spread of jihadi terrorist organizations throughout the region to the decline of democracy and the growth of autocratic regimes, the Middle East will demand the new U.S. president's immediate attention.

The civil war in Syria is not likely to end soon, but some things could help alleviate suffering and hurry the conclusion.

Chief among them would be to work with the Russians and formulate an end to the war. Only Russia can deliver Syrian President Bashar al-Assad, and only with Russian agreement can Washington and its allies act decisively against Islamic State forces and jihadis backed by al-Qaeda. The price of Russia's partnership would be having Mr. al-Assad continue in power at least in the short term.

President Barack Obama tried to play it safe – offering support to a relatively small number of Syrian rebel groups, and declining to get further involved in the fight against the Assad regime.

As a result, Islamic State forces and the al-Qaeda-backed Nusrah Front had the greatest success taking and holding Syrian territory, while the Assad regime, backed by Russia, Iran and the Lebanese Hezbollah militia, held its ground in central urban areas such as Damascus, Homs and Hama.

With Russia on the ground safeguarding the Syrian regime, the threat of attacks from U.S. forces is off the table.

The new president must continue a hands-off approach or work with Russia and allow Mr. Assad to stay in power for the near future.

The United States and a cluster of allies are helping Iraq's efforts to eradicate Islamic State forces that hold the country's second-most important city, Mosul. Fighting there will soon reach a climax, and victory for the combined forces of the Iraqi army, the Kurdish Peshmerga and the Iranian-backed Shia militias could come as early as spring.

The trouble is what may come next: sectarian revenge against Sunni civilians, or even ethnic cleansing?

The new president must ensure Baghdad provides a place for Sunnis in Iraq. To do that requires support from Baghdad's most influential partner, Iran.

There is no love lost between Iran's Shia leadership and the Sunnis of Iraq, so it must be made worthwhile for Tehran to listen to the new president.

It may seem small and inconsequential, but Yemen is engaged in a civil war with far-reaching consequences that pits Saudi-backed Yemeni government forces against Iranian-supported Houthi rebels.

To date, the United States has assisted the Saudi operation with logistical support – a reasonable position considering the legitimacy of Yemen's interim government. But excesses by Saudi forces have killed many civilians, and Saudi tactics have opened up large areas of the country in which al-Qaeda and the Islamic State operate freely.

The new president must decide whether to end support for the Saudi-backed campaign. To do so, however, would aggravate the already edgy alliance between Washington and the House of Saud.

The Obama administration questioned Riyadh's value as an ally and criticized its human-rights shortcomings. Yet it continues to back Saudi efforts in Yemen and to provide a safety net for the Saudis.

For its part, the Saudi leadership accuses Mr. Obama of abandoning old friends in favour of supporting Iran, which is Riyadh's ultimate enemy. But it also launched an Arab peace initiative that could end the 68-year-old state of war with Israel.

While Washington worries most about jihadi groups in the region, Saudi Arabia is concerned that neighbouring Iraq, with U.S. acquiescence, is becoming an Iranian puppet.

The new president must determine if the Saudi relationship is worth keeping. If so, Washington will have to grit its teeth and show the kingdom some respect.

Obama officials criticized the Turks for their renewed war on the country's nationalist Kurds, for jailing journalists and shutting media outlets, and for blaming followers of Fethullah Gulen, an exiled preacher living in the United States, for an attempted coup d'état in July.

Yet Turkey is too important to abandon. It remains a powerful member of NATO, with fingers in many of the region's hot spots. It is staunchly opposed to the Assad regime in neighbouring Syria, but supports the autonomous Kurdish region in northern Iraq. It has had an up-and-down military relationship with Israel, while befriending the Palestinian resistance movement Hamas. Its hot-and-cold relationship with Russia is warming up.

The next president must find a way to work with Turkey even as a new administration criticizes Ankara's human-rights abuses.

Mr. Obama sided with Egyptian protesters in the 2011 campaign to oust the country's president, Hosni Mubarak. And he supported the "moderate" Muslim Brotherhood when its leader was elected to take Mr. Mubarak's place.

But the victory of the people was short-lived. The Muslim Brotherhood administration was anything but moderate, and the country's economy went in the dumpster.

The army stepped in – much to most Egyptians' relief. Thousands now are in prison and press freedom has been curtailed, but the country is calm and the economy shows signs it may yet bounce back.

To most Egyptians, Mr. Obama's interventions gave the United States a bad name. And President Abdel Fattah el-Sisi has turned to Russia and Iran for assistance.

The new president must choose whether to support Egypt's heavy-handed law-and-order policies and rebuild the relationship between the two countries.

Watch out for the wild cards

After years of being an outcast, Iran is enjoying an unprecedented rise in regional influence, much of it at the expense of Saudi Arabia.

Is this the emergence of a new Iran, willing to play by the rules and enjoy peaceful regional relationships? That's what Mr. Obama has banked on. Or does it signal the arrival of another Iran, one that wants to lead the region's Shia Muslims into battle with the Sunnis, triggering a sectarian war and precipitating a schism in the Muslim world?

Mr. Obama opened the door to the Iran now emerging. His successor must cope with the consequences.

It is fair to say that relations between the governments of Israel and the United States have never been worse. Mr. Obama blames Israel for strangling the peace process that held out the prospect of a two-state solution, while the administration of Benjamin Netanyahu is fixated on keeping what it considers to be the entire ancient Land of Israel, even though a substantial Arab population has lived on parts of it for hundreds of years.

As a result, Israel has faced a growing barrage of international condemnation that may lead to it being further ostracized.

The new president will want to assure the Jewish people that Washington stands by them, although it may not stand by the current Israeli government until it has changed its policies.

Israel is used to being at the centre of this region's priorities. That is not the case today, as other issues, conflicts and concerns take prominence.

The new president must decide whether to adjust Washington's priorities accordingly. 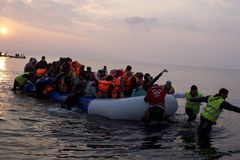 The world won’t rely on a President Trump – and that’s worrying
November 6, 2016
Follow Patrick Martin on Twitter @globepmartin
Report an error Editorial code of conduct
Due to technical reasons, we have temporarily removed commenting from our articles. We hope to have this fixed soon. Thank you for your patience. If you are looking to give feedback on our new site, please send it along to feedback@globeandmail.com. If you want to write a letter to the editor, please forward to letters@globeandmail.com.
Comments