The legal battle over U.S. President Donald Trump's immigration ban intensified on Monday as supporters and opponents of the measure sought to sway a panel of appellate judges ahead of a crucial hearing.

Federal prosecutors submitted fresh arguments in favour of reinstating the ban, which was temporarily halted by a lower court on Friday. That ruling allowed refugees and visa holders from seven Muslim-majority countries to once again enter the United States.

Blocking the ban is equivalent to taking "the extraordinary step of second-guessing" the President on a matter of national security, an area where he has broad legal authority, the government argued in papers filed Monday.

Marcus Gee: So much for America's historic role

David Shribman: The United States of chaos and confusion

Related: At airports across U.S., lawyers aim to counter Trump

Meanwhile, the states of Washington and Minnesota, which launched the challenge to the ban, told the appeals court that restarting the restrictions would "unleash chaos" and charged that "the President acted in bad faith in an effort to target Muslims" by signing the executive order on Jan. 27.

The U.S. Court of Appeals for the Ninth Circuit, which is based in San Francisco, scheduled a hearing for Tuesday afternoon and experts believe the judges will issue a ruling as quickly as possible. But the legal combat is unlikely to end there and could reach all the way to the country's Supreme Court.

A slew of briefs filed in support of Washington and Minnesota's case underscored the depth of the opposition to the immigration ban. Nearly 100 technology companies, 16 states, a major union and 10 former national-security officials submitted briefs in support of the legal challenge to the ban.

The states said that the ban had harmed the recruitment of highly skilled employees, prevented staff from returning to jobs at universities and dented tax revenues. The former government officials, who served primarily under Democratic presidents, said that the ban could not be justified on the grounds of protecting national security but instead threatened to harm such interests.

Late last week, Washington and Minnesota won a key victory when a lower court in Seattle temporarily halted the implementation of the ban nationwide. Visa holders from seven countries – Iran, Iraq, Somalia, Yemen, Syria, Libya and Sudan – have raced to reach the United States while the ban is suspended. The Trump administration quickly appealed the ruling and sought to overturn it.

Meanwhile, Mr. Trump mounted a ferocious defence of his policy. He asserted that the lower court ruling was a boon to would-be terrorists. And, in terms that were unusual – if not unprecedented – for an American president, Mr. Trump disparaged the judge who issued the decision, describing him as a "so-called judge."

On Monday, during a visit to an air force base in Florida, Mr. Trump reiterated his call for more stringent checks on those entering the United States. "We need strong programs so that people who love us and want to love our country and will end up loving our country are allowed in, not people that want to destroy us and destroy our country," Mr. Trump said.

The federal appeals court in San Francisco is known for its liberal bent. But its ruling is expected to focus on whether the lower-court judge in Seattle overstepped his authority in issuing a ruling that applied nationwide, not on the larger questions surrounding the constitutionality of the immigration ban.

Once the appeals court rules, either side could ask the Supreme Court to take up the case. At present, the highest court has only eight sitting justices and is divided equally into liberal and conservative wings.

To overturn an appeals court ruling would require five justices, while a tie would leave the ruling intact. (Mr. Trump's nominee to fill the empty seat on the the court, Neil Gorsuch, is still in the early phases of his confirmation process.)

The case could also move back to the lower court in Seattle for a fuller hearing on its merits. That result, too, could be subject to a series of appeals eventually ending at the Supreme Court.

A group of 97 of the world's top technology companies, including Google, Facebook, Apple, Microsoft, Twitter and Uber, argued in a brief that Mr. Trump's order inflicts "substantial harm on U.S. companies."

The immigration ban "hinders the ability of American companies to attract great talent; increases costs imposed on business; makes it more difficult for American firms to compete in the international marketplace; and gives global enterprises a new, significant incentive to build operations – and hire new employees – outside the United States," the brief states.

The companies contend that the order violates both the U.S. Constitution and an immigration law enacted in 1965 that prohibits excluding people on the basis of nationality.

A group of 10 former secretaries of state, Central Intelligence Agency directors and other national-security officials – from the administrations of Bill Clinton, George W. Bush and Barack Obama – also submitted a joint declaration backing the states' fight against the order.

The declaration asserted that Mr. Trump's order would "endanger U.S. troops in the field" by damaging the country's ability to gather intelligence in the Middle East and would ultimately help the Islamic State group's recruitment efforts "by feeding into the narrative that the United States is at war with Islam."

Another brief was filed by 16 state and district attorneys-general, among them the states of New York, Pennsylvania, Massachusetts, California, Iowa and Illinois. They detailed the disruptions that the ban had caused to hospital staffing and educational institutions.

The interests of the country would be best served by continuing to block the ban, they wrote, thereby "avoiding further turmoil," pending a more thorough legal review by the courts. 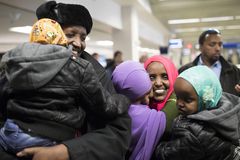 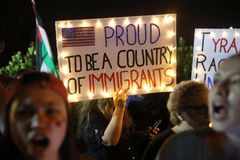 Follow Joanna Slater and Adrian Morrow on Twitter @jslaternyc @adrianmorrow
Report an error Editorial code of conduct
Due to technical reasons, we have temporarily removed commenting from our articles. We hope to have this fixed soon. Thank you for your patience. If you are looking to give feedback on our new site, please send it along to feedback@globeandmail.com. If you want to write a letter to the editor, please forward to letters@globeandmail.com.
Comments