The Trump administration imposed new sanctions Tuesday on a slew of North Korean shipping firms and Chinese trading companies in its latest push to isolate the rogue nation over its nuclear weapons development and deprive it of revenue.

The Treasury Department also designated a North Korean corporation involved in exporting workers overseas. The action came a day after the United States returned North Korea to its list of state sponsors of terrorism.

"These designations include companies that have engaged in trade with North Korea cumulatively worth hundreds of millions of dollars," Treasury Secretary Steven Mnuchin said in a statement. "We are also sanctioning the shipping and transportation companies, and their vessels, that facilitate North Korea's trade and its deceptive manoeuvres."

Among the companies targeted were four Chinese-based companies and one Chinese individual said to have deep commercial ties with North Korea. The sanctions were imposed under a September executive order that opened the way for the U.S. to punish foreign companies dealing with the North. It bars those sanctioned from holding U.S. assets or doing business with Americans.

The Dandong Kehua Economy & Trade Co. Ltd., Dandong Xianghe Trading Co. Ltd., and Dandong Hongda Trade Co. Ltd. are alleged to have exported about $650-million worth of goods to North Korea and imported more than $100-million from North Korea since 2013.The goods included notebook computers, anthracite coal, iron and other commodities and ferrous products.

Also sanctioned were Chinese national Sun Sidong and his company, Dandong Dongyuan Industrial Co., said to have exported more than $28-million worth of goods to the North.

The targeting of Chinese companies is a sore point with Beijing, whose help Trump is counting on to put an economic squeeze on Pyongyang. China recently sent its highest-level envoy to North Korea in two years to discuss the tense state of affairs on the Korean Peninsula.

"China firmly opposes unilateral sanctions out of the UN Security Council framework," the Chinese Embassy in Washington said Tuesday, "especially the imposition of the so-called 'long-arm jurisdiction' by other countries in accordance with their domestic laws."

As part of its effort to stymie North Korean transportation networks, the Treasury Department sanctioned North Korea's Maritime Administration and its transport ministry, six North Korean shipping and trading companies and 20 of their vessels, which are all North Korean-flagged.

It accused North Korea of deceptive shipping practices, including ship-to-ship transfers, which is prohibited under UN sanctions that have been imposed in response to Pyongyang's rapid tempo of nuclear and ballistic missile tests. The Treasury statement included aerial photos of what it said was Korea Kumbyol Trading Company's vessel Rye Song Gang 1 possibly transferring oil to evade sanctions that have restricted fuel exports to the North.

Also sanctioned was the Korea South-South Cooperation Corporation, said to have exported North Korean workers to China, Russia, Cambodia and Poland to generate revenue for the government.

When President Donald Trump announced the terror designation of North Korea on Monday, he promised to intensify the "maximum pressure" campaign against Pyongyang with the "highest level" of sanctions yet – part of a rolling effort to compel it to negotiate over its nuclear program, which poses an emerged threat to the U.S. mainland.

An editorial Tuesday in North Korea's ruling party newspaper, Rodong Sinmun, called Trump a "heinous criminal" who had insulted the dignity of the country's supreme leadership and its socialist system during his recent visit to South Korea. The editorial, carried by the state-run news agency, threatened "merciless punishment." It did not mention the terror designation or the threat of new sanctions.

Secretary of State Rex Tillerson acknowledged Monday a two-month pause in the North's nuclear and missile tests and said there was still hope for diplomacy. With tougher sanctions in the offing, he warned North Korean leader Kim Jong-un: "This is only going to get worse until you're ready to come and talk."

The terror designation, however, is likely to exacerbate sour relations between Washington and Pyongyang that have turned uglier with name-calling between Trump and Kim. North Korea shows no interest in talks aimed at getting it to give up its nukes.

North Korea has joined Iran, Sudan and Syria on America's terror blacklist, a position it has occupied on and off the terror list over the years. It was designated for two decades because of its involvement in international terror attacks in the 1980s, then taken off in 2008 to smooth the way for nuclear talks that soon failed. 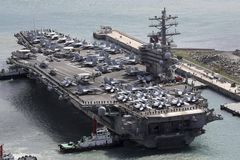