The military-appointed lawyer Omar Khadr tried to fire last month has launched a last-ditch attempt to stop the military tribunal that could lock up the 23-year-old Canadian for life, petitioning the U.S. Supreme Court to halt the proceedings.

It's the top court's obligation to stop a trial that might be illegal in the first place, Lieutenant-Colonel Jon Jackson argues - especially because the results of next month's court proceedings in Guantanamo Bay could result in a life sentence for Mr. Khadr.

"The potential harm to the petitioner [Mr. Khadr]is enormous - subjection to a trial on a potential life sentence that is entirely illegitimate and should not even have been charged, much less tried," the petition reads.

The Military Commissions Act was introduced in 2009 by President Barack Obama's administration after the U.S. Supreme Court deemed its predecessor illegal.

At the very least, the petition argues, trial proceedings should be stayed until the U.S. court system determines the legality of the military-commission process in response to a similar petition filed in March.

The petition is a long shot and has scant chance of success, notes American University law professor Stephen Vladeck, "even though it shouldn't be."

"U.S. federal courts have been disturbingly unwilling to grapple with some of the most serious charges levelled against the Military Commissions Act," he said. "I suspect that the Supreme Court will stay out of this case until and unless Khadr is convicted, and appeals his conviction along the same lines as he's currently looking for relief."

But Col. Jackson said in an interview Tuesday that he's "very hopeful" of an answer this week.

"I'm hopeful they will say this is a clear violation of the equal-protection clause and they must act before this case goes to trial. … But this is uncharted territory."

In the meantime, preparations for court proceedings next week continue. More than 30 journalists are expected to descend on Guantanamo Bay for the trial.

Prosecutors allege that the Toronto-born Mr. Khadr threw the grenade that killed a U.S. soldier in an Afghan firefight in 2002. Mr. Khadr, who was 15 at the time, has been in U.S. custody ever since.

Charges against him include murder, attempted murder, planting roadside bombs and supporting terrorism; if convicted, he could get a life sentence.

After years of legalistic wrangling and pretrial hearings, his trial is set to go forward next week after a defence motion to suppress evidence Mr. Khadr's lawyers allege was obtained through coercion and torture. 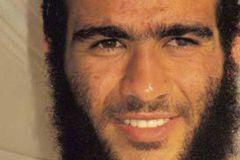