Iran and a group of six world powers struck a positive pose in Geneva this week as they began new negotiations to bring Iran's disputed nuclear program to heel. While details of the first two days of talks are carefully guarded and the terms of an agreement are far from clear, the process itself is being greeted with enormous enthusiasm.

White House spokesman Jay Carney said U.S. President Barack Obama welcomed Iran's Geneva initiative, intended to show that Tehran's nuclear program has no military objectives. "The Iranian proposal," said Mr. Carney, "is a new proposal with a level of seriousness and substance that we had not seen before."

Iranian Foreign Minister Mohammad Javad Zarif told reporters: "We hope that this is a beginning of a new phase in our relations" with the international community. Mr. Zarif's goal is to win a reprieve from the economic sanctions imposed on Iran for failing to comply with the Nuclear Non-Proliferation Treaty (NPT).

The talks were the first held since Iranian President Hasan Rouhani took office in August, and the positive atmosphere stood in sharp contrast to previous meetings between Iran and the permanent members of the United Nations Security Council (the United States, Russia, China, Britain and France) and Germany.

Then, there was little progress and little enthusiasm for continuing the process.

This week, however, the parties agreed to meet again in only three weeks' time, and to have technical experts from both sides meet in the interim. Agreeing to release few details of the discussions showed "the seriousness" of the talks, said Mr. Zarif.

Indeed, Western diplomats told reporters they were hesitant to divulge specifics about the negotiations due to sensitivities involved – both in Tehran, where conservative hard-liners reject any deal that could curtail the nuclear program, and in Washington, where hawks are reluctant to support an end to the sanctions that have been imposed on Iran.

The details that have leaked out indicate Iran is willing to accept increased inspection of its nuclear facilities, including surprise inspections, and is ready to negotiate the form, size and level of uranium enrichment it carries out. However, Tehran is not willing to renounce what it considers to be its right to enrich uranium.

Iran has been enriching the radioactive mineral to a purity of 20 per cent, considerably purer than required for civilian applications such as producing electrical power or medical isotopes, but well short of the 90-per-cent purity needed for nuclear weapons.

Iran's semi-official Fars News agency said Iran was willing to halt enrichment of uranium at 20-per-cent purity for up to six months.

In exchange for these things, Iran wants an end to all sanctions imposed on it within six months.

"This tells us that the Iranians are very serious because they want sanctions lifted," said Geneive Abdo, director of the U.S.-Iran Advisory Group at the Stimson Center, a non-partisan Washington think tank. "But this does not mean they believe they are vulnerable," she added. "They will be hard negotiators."

Indeed, one of the international community's key demands – having all stockpiles of enriched uranium removed from Iran – was ruled out Sunday before the talks even began. "The shipping of materials out of the country is our red line," Iran's deputy Foreign Minister, Abbas Araqchi declared.

There is a limit as to how far Iran can be pushed on these matters, said Ms. Abdo. "Rouhani is facing stiff opposition at home on these issues, particularly with the IRGC," she said, referring to the powerful Republican Guards.

"Pushing Rouhani too hard will not advance Western interests," she said.

In Israel, where events are being watched closely, there is a different view of this week's negotiations.

"Iran talks as if it had a god-given right to enrich uranium," said Emily Landau, a senior research associate at the Institute for National Security Studies in Tel Aviv. "It doesn't."

"Under the NPT, it has the right to pursue peaceful uses only for its uranium," she explained. When it violated that obligation and refused to comply with Security Council resolutions against it, "it lost the right to enrich."

"The key question in these negotiations is whether Iran convincingly demonstrates it is abandoning its efforts to achieve a nuclear military capacity," said Ms. Landau.

"If they said they'd take away the 1,000 new-generation centrifuges they recently installed, that would be significant," she said. "But they haven't. Nothing they've put on the table for discussion means an end to their military program."

‘Israel will not allow Iran to get nuclear weapons,’ Netanyahu warns
October 1, 2013 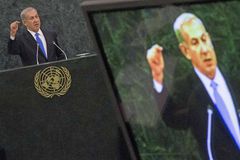