As the sound of fireworks, honking car horns and ecstatic red-clad chavistas chanting victory subsided on Sunday night, the empty streets of Venezuela´s capital were plunged in doubt. With Nicolas Maduro it now has a president-elect with a weak mandate, set to govern a sharply divided nation facing a severe economic crisis.

Challenger Henrique Capriles lost the presidential election by only 235,000 votes – a 1.6 percentage point margin – to interim-president Maduro, the anointed successor of socialist firebrand president Hugo Chavez, who died last month of cancer. Unlike last October´s election when Mr. Capriles lost by 11 points to Mr. Chavez himself and he and his followers were quick to admit defeat, the opposition leader now refuses to accept the result.

He claims some 3,200 acts of electoral fraud were committed and demands a full recount of every last vote. "You and your government are the ones who were beaten today," Mr. Capriles angrily said at a news conference almost immediately after the results were made official. "I do not pact with a person I consider illegitimate."

Mr. Capriles's defiance is greeted enthusiastically by his supporters, who accuse the chavista government of having stolen the elections through illegal propaganda, intimidation of voters by socialist motorcycle gangs and outright attempts of fraud.

"I can´t believe it, I just can´t," says a bewildered old Álvaro Rincones, a 25-year old chef from Caracas who voted for Capriles. "There must have been fraud. There is no way Maduro could have won."

In his victory speech, Mr. Maduro said he is prepared to have the ballot result 'audited', a decision that must ultimately be made by the National Electoral Council (CNE). So far, the CNE has not yet commented on the possibility of a recount.

The opposition´s refusal to concede defeat further deepens the divide in Venezuela, where the working class overwhelmingly supports the "Bolivarian Revolution", the socialist policy designed by the late Mr. Chavez which consists of funding free health care, housing and education, tight restrictions on currency exchange and foreign trade and large-scale expropriations.

The upper and middle classes, however, abhor the dark side of chavism: factories running at half capacity, inflation spiking at 30 per cent and scarcity of basic products in supermarkets and convenience stores. Violent crime has reached record heights, infrastructure is crumbling.

Even if Mr. Maduro could overcome the accusations of fraud and his victory were confirmed in the following weeks, his presidency starts with a very weak mandate. Only two weeks ago most polls gave him a massive 20 point lead over Mr. Capriles, an advantage that almost completely vanished in the shortest campaign in Venezuelan recent history.

Mr. Maduro seems to have lost a vast amount of political capital with his vicious, sometimes absurd campaign antics. He was widely mocked by the opposition and even by moderate chavistas for claiming the spirit of Mr. Chavez visited him in the form a little bird, and by cultivating an almost religious image of his former leader.

"I do not believe Mr. Maduro will be able to stay in power for very long", says Hugo Santaromita, a political commentator who has worked for the chavist government in the past. "He has been placed on the forefront by the party apparatus, and does not have the personality or the authority to control the government. He will be unable to fix the problems of the economy."

Indeed, the prospects of Maduro in general are quite grim. Without the undisputed leadership of Mr. Chavez, Venezuela´s socialist government is far more vulnerable to infighting. Its two fundamental pillars, the bloated state bureaucracy and the armed forces, under Mr. Chavez were only held together by the president´s charisma and political savvy, skills Mr. Maduro appears to lack.

Even many supporters of Mr. Chavez are doubtful whether Mr. Maduro has the leadership qualities to face the difficulties ahead. "He is not Chavez", says César Molano, a 41-year old taxi driver from Caracas, who has been a loyal supporter of Mr. Chavez since he first was elected 1998. "Support for Nicolas is not unconditional. He has to prove he is up for the task first."

Chavistas go all out to ensure Maduro victory
April 12, 2013 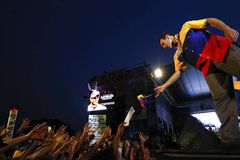