Vice-President Mike Pence's visit to Latin America comes amid unrest in Venezuela and concern by its neighbours about a possible American military role.

Pence planned to meet with Colombia's president, Juan Manuel Santos, later Sunday at the start of a weeklong trip likely to be dominated by conversations about the crisis in Venezuela. The United States accuses Venezuelan President Nicolas Maduro of a power grab that has sparked deadly protests and condemnation across the region.

President Donald Trump on Friday said he would not rule out a "military option" in response to Maduro's moves.

That statement drew quick condemnation, including from the Colombian Foreign Ministry, which opposed any "military measures and the use of force," and said efforts to resolve Venezuela's breakdown in democracy should be peaceful and respect its sovereignty.

CIA Director Mike Pompeo said Trump, by raising the prospect of possible military action, was trying "to give the Venezuelan people hope and opportunity to create a situation where democracy can be restored." Pompeo told "Fox News Sunday" that Venezuela "could very much become a risk" to the U.S. if it descended into further chaos.

Yet a Republican on the Senate Armed Services Committee who calls himself "a pretty hawkish guy" expressed skepticism about the idea of American troops in Caracas.

"I'm open-minded to a reason, but at the end of the day, our military should be deployed when there's a national security interest that can be articulated to the American people," South Carolina's Lindsey Graham told "'Fox News Sunday," adding: "I don't see one in Venezuela in terms of the military force."

Trump's national security adviser said the Trump administration wants to get a handle on the current situation under Venezuelan President Nicolas Maduro's embattled government and "understand better how this crisis might evolve."

Venezuela's chief opposition coalition issued a restrained criticism of President Donald Trump's talk of using a "military option." The coalition rejected "the use of force or threats of applying the same in Venezuela on the part of any country." But the coalition's statement didn't directly mention Trump's remarks.

The U.S. has imposed sanctions against Maduro and more than two-dozen current and former officials in response to a crackdown on opposition leaders and the recent election of a pro-government assembly given the job of rewriting the country's constitution.

"The president never takes options off the table in any of these situations and what we owe him are options," he said.

McMaster said the U.S. would "continue a series of actions against the Maduro regime which aim to strengthen the opposition and to reach out to those who are members of this oppressive regime to tell them it's time to reconsider your actions and your support for this dictator."

Meantime, Pence has scheduled other stops in Argentina, Chile and Panama, giving speeches and meeting with leaders. He will tour the newly expanded Panama Canal.

In Colombia, Pence was expected to highlight trade, business investment and other ties between the nations, including U.S. support for Bogota's efforts to implement its peace deal with the Revolutionary Armed Forces of Colombia.

The U.S. probably will seek assurances that Colombia is taking seriously a surging coca production that's been blamed partially on Santos' decision in 2015 to stop using crop-destroying herbicides.

A July report from the United Nations showed that coca production in Colombia had reached levels not seen in two decades, complicating Colombia's efforts to make its vast, lawless countryside more secure.

The Trump administration has been putting pressure on Colombia to curb the flow of drugs into the U.S., and Colombia has stepping up its forced eradication program and increased seizures of cocaine. 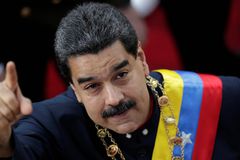 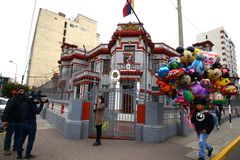