Opponents of President Nicolas Maduro poured into the streets Friday to condemn the surprise arrest of Caracas' mayor for allegedly participating in a U.S.-backed plot to overthrow his government.

An armed commando unit dressed in camouflage raided Mayor Antonio Ledezma's office late Thursday and hauled him away amid protests by his staff. The detention, recorded by security cameras, set off a wave of spontaneous demonstrations, with Venezuelans in middle-class enclaves loyal to the opposition banging pots and pans and blaring their car horns.

A few hundred supporters gathered peacefully Friday in eastern Caracas to denounce Ledezma's "kidnapping," which they likened to the illegal snatching of activists by South American military dictatorships in the 1970s.

Ledezma was expected to appear in court later Friday. His lawyers said they had not yet been informed of the charges that will be levied against him.

The arrest of the 59-year-old mayor, one of Maduro's fiercest critics, comes as the government struggles to avert a crisis years in the making but made worse by a recent tumble in oil prices. The president's approval rating was hovering around 22 per cent in January, the lowest in 16 years of socialist rule, as Venezuelans are forced to cope with widespread shortages, runaway inflation and a plunge in the currency that shows little sign of abating.

Maduro has taken to the airwaves in recent days to rail against his opponents, accusing them of conspiring with the United States to sabotage the oil-dependent economy, sowing chaos and carry out a coup timed to coincide with the anniversary this month of 2014 anti-government protests that caused more than 40 deaths.

As part of the crackdown, he's also seized control of a major retail chain, jailed several executives and handed more power to the military to control protests and smoke out saboteurs.

However, the dire situation hasn't translated into support for the frequently out-manoeuvred opposition.

Turnout at Friday's demonstration was the largest for an anti-government rally in months but nowhere near the throngs that rocked cities a year ago, a sign of the steep challenge the opposition still faces connecting with voters ahead of legislative elections later this year that, if it carries, could pave for a recall referendum.

On Thursday night, Maduro went on national TV to denounce the "vampire" Ledezma, pointing to a public letter he wrote with two other hardliners calling for a transitional government as evidence that a putsch is underway.

He also accused U.S. Embassy officials of calling the wives of army generals to inform them that their American visas had been revoked in an effort to peel away military support for his government. The U.S., which this month expanded a travel ban on Venezuelan officials accused of human rights abuses and corruption, called the accusations "baseless and false."

While Ledezma's arrest may be the boldest action against his rivals, it's unlikely to rattle Maduro's core base, which is better organized and more at ease in the throes of the crisis than the opposition, according to David Smilde, a Venezuelan researcher and senior fellow at the Washington Office on Latin America.

"The 20 per cent that are left (supporting Maduro) are pretty hardcore and Ledezma is not a likable character," Smilde said.

The embattled president could also be gambling that the allegations of a coup will enable him to distract attention from the mounting woes and weaken the opposition enough to allow him to prevail in legislative elections slated for later this year.

But the growing crackdown is not without risks. Opponents, who seemed lifeless in recent weeks even as the country's problems have worsened, are enraged and Smilde says international pressure on Maduro is likely to increase.

Human rights groups were quick to condemn what they said is a campaign of intimidation while the U.S.'s top diplomat to Latin America called on regional governments to ensure Venezuela lives up to its commitments to democracy.

So far reaction has been muted, with Colombian President Juan Manuel Santos, the U.S.'s top ally in the region, expressing concern and urging Ledezma's due process rights be respected but stopping short of calling for the mayor's release.

Ledezma has been a thorn in the side of the ruling party since he was elected mayor in 2008, beating out a member of the socialist party led by the late President Hugo Chavez. The government subsequently transferred most of his powers to a newly created office run by a loyalist.

He was re-elected in 2013 and has been on the attack ever since alongside Leopoldo Lopez, a former mayor whom he'll now join in jail. Lopez was arrested a year ago for allegedly inciting violence at anti-government protests.

Despite Ledezma's reputation as a rabble-rouser he's rare among opposition leaders in having family ties to the ruling elite by way of his stepdaughter, who is married to Tourism Minister Andres Izarra, a top government spokesman.

Government critics say that as the administration loses strength, it is becoming more dangerous.

"The mayor of the capitol arrested just like that? That never happens. It's too ugly," said Maria Fernandez, who lives in the shadow of the presidential palace and makes her living selling loose cigarettes, candy and pirated movies. "I'm worried we're going to see more repression." 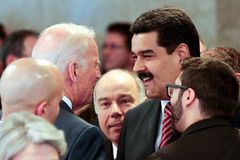 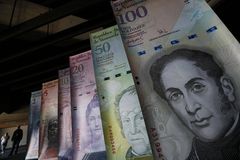