Venezuela will set up a formal inquiry into suspicions that the late President Hugo Chavez's cancer was the result of poisoning by his enemies abroad, the government said.

The accusation has been derided by critics of the government, who view it as a typical Chavez-style conspiracy theory intended to feed fears of "imperialist" threats to Venezuela's socialist system and distract people from daily problems.

Still, acting President Nicolas Maduro vowed to push through a serious investigation into the claim, which was first raised by Chavez himself after he was diagnosed with the disease in 2011.

"We will seek the truth," Maduro told regional TV network Telesur late on Monday. "We have the intuition that our commander Chavez was poisoned by dark forces that wanted him out of the way."

Foreign scientists will be invited to join a government commission, the OPEC nation's acting leader said.

Maduro, 50, is Chavez's handpicked successor and is running as the government's candidate in a snap presidential election on April 14 that was triggered by his boss's death last week.

He is trying to keep voters' attention firmly focused on Chavez to benefit from the outpouring of grief among his millions of supporters. The opposition is centering its campaign on portraying Maduro, a former bus driver, as an incompetent who, they say, is morbidly exploiting Chavez's demise.

Running for the opposition's Democratic Unity coalition is a business-friendly state governor, Henrique Capriles, 40, who lost to Chavez in a presidential vote last year.

Tuesday was the last day of official mourning for Chavez, although ceremonies appear set to continue. His embalmed body was to be taken in procession to a military museum on Friday.

Millions have filed past Chavez's coffin to pay homage to a man who was adored by many of the poor for his humble roots and welfare policies, but was also hated by many people for his authoritarian style and bullying of opponents.

Though Maduro has spoken about combating crime and extending development programs in the slums, he has mostly used his frequent appearances on state TV to talk about Chavez.

The 58-year-old president was diagnosed with cancer in his pelvic region in June 2011 and underwent four surgeries before dying of what sources said was metastasis in the lungs.

Maduro said it was too early to specifically point a finger over Chavez's cancer, but noted that the United States had laboratories with experience in producing diseases.

"He had a cancer that broke all norms," Maduro told Telesur. "Everything seems to indicate that they affected his health using the most advanced techniques ... He had that intuition from the beginning."

Maduro has compared his suspicions over Chavez's death with allegations that Palestinian leader Yasser Arafat died in 2004 from poisoning by Israeli agents.

The case echoes Chavez's long campaign to convince the world that his idol and Venezuela's independence hero Simon Bolivar died of poisoning by his enemies in Colombia in 1830.

Though keeping a low profile out of respect for Chavez's supporters, opponents are furious at what they see as the use of his death by government officials to bolster their chances of staying in power.

Launching his candidacy on Monday, Maduro's speech began with a recording of Chavez singing the national anthem. Hearing his booming voice again, many supporters wept.

As well as the wave of sympathy over Chavez, the opposition faces a well-financed state apparatus, institutions packed with government supporters, and problems within its own rank-and-file, still demoralized over October's presidential election defeat and a mauling at gubernatorial polls in December.

Capriles, an energetic lawyer and career politician, has tried to kick-start his campaign with accusations that Maduro and other senior officials lied about the details of Chavez's illness, hiding the gravity of his condition from Venezuelans.

That has brought him a torrent of abuse in return, with the words "Nazi" and "fascist" being used by senior government officials - despite Capriles' Jewish roots.

At stake in the election is not only the future of Chavez's leftist "revolution," but the continuation of Venezuelan oil subsidies and other aid crucial to the economies of left-wing allies around Latin America, from Cuba to Bolivia.

Polls from before Chavez's death gave Maduro a lead over Capriles of more than 10 percentage points.

Though there are hopes for a post-Chavez rapprochement between Venezuela and the United States, a diplomatic spat worsened on Monday when Washington expelled two Venezuelan diplomats in a tit-for-tat retaliation.

Next Venezuelan government should move country to the centre
March 11, 2013 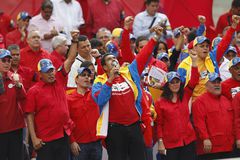 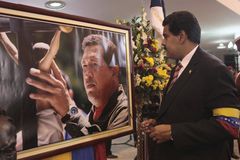