In the serene private clubs of Caracas, there is no milk, and the hiss of the cappuccino machine has fallen silent. In the slums, the lights go out every few days, or the water stops running. In the grocery stores, both state-run shops and expensive delicatessens, customers barter information: I saw soap here, that store has rice today. The oil engineers have emigrated to Calgary, the soap opera stars fled to Mexico and Colombia. And in the beauty parlours of this nation obsessed with elaborate grooming, women both rich and poor have cut back to just one blow-dry or manicure each week.

Venezuela, the world's fifth-largest oil producer, is a leading candidate for next collapsed state.

"To be Venezuelan today is to live on the edge of the apocalypse, convinced it will happen tomorrow," said Alberto Barrera, a poet, screenwriter and biographer of the late Venezuelan president Hugo Chavez, in a recent conversation over coffee that was, by necessity, black. "But then, we've been expecting the crisis at any moment for years now."

Inflation is running at over 50 per cent, a raging black market buys dollars at more than 10 times the official rate, domestic industry has all but shut down; there are critical shortages of many consumer staples, including corn flour for arepas, the national breakfast. TV stations – now all state-controlled – are full of ads that alternately denounce capitalism or show square-shouldered actors talking about how they don't hoard and buy only what they need. Billboards boast of how socialist Venezuela has never been stronger; yet almost no one has toilet paper in their bathrooms.

The apocalypse hasn't come yet. "The crash never comes because Venezuela has an insurance other countries don't have – one of the largest oil reserves in the world," said Jorge Roig, president of the Federation of Chambers of Commerce. Venezuela's economic indicators defy logic, he said, but the international thirst for oil has postponed the day of reckoning.

High oil prices funded Mr. Chavez's "Bolivarian revolution" over the past 14 years. He made massive investments in health and education; because the government releases almost no reliable data, it is debatable how much impact these had on human development, but they did inspire a belief in redistribution and justice, and ensured his huge popularity.

But since Mr. Chavez's death nearly a year ago, it has become apparent that his hand-picked successor, Nicolas Maduro, lacks his charisma. Meanwhile, the safety net is starting to tatter. Production by the national oil company, Petroleos de Venezuela, S.A, or PDVSA, is declining, although the government won't say by how much. The company is crippled by debt, has no cash to invest in operations, must operate on the posted exchange rate, and has been turned into a bizarre do-everything organization that makes jam and processed chicken, builds houses and runs neighbourhood health clinics.

As uncertainty grows, Venezuelans must adapt to an ever-shifting reality. In the middle and upper class, this means cultivating friendships with grocery store clerks who text you when a shipment of butter comes in; shopping on credit cards, because the bolivare, the national currency, will be worth even less when the bill comes due; and sinking cash into hard assets such as a used car, if you can find one (the official waiting list at dealerships is years long.)

"I have so much sugar stacked up in my house you can hardly get in the door," said Josefina Turco, a lawyer who was lining up repeatedly in stores on a recent afternoon to get ingredients for a birthday cake for her daughter.

People with access to dollars through jobs or travels use a vast network of illegal but openly operating currency traders to buy black market bolivares and fund a lifestyle that is perversely cheap (at 10 to 1 against the posted rate) even as prices shoot up. That cappuccino, if you can find the milk, is the equivalent of $6 at the posted price – but 60 cents in black-market bolivares.

For low-income people – about 40 per cent of the population – there are cushions, such as state-subsidized grocery stores, where the prices of staples are about half the market rate. There are state-imposed price controls on everything from TVs to rice and beans.

Many of the poor and lower middle class remain ardent supporters of Mr. Chavez's socialist party and his redistribution project. "The Comandante in his 14 years of rule filled us with idealism … the idea that we are all entitled to a share will survive him," said Henrique Ollorbes, 63, a retired firefighter whose extended family lives on a network of pensions, grants and schemes provided by the government.

But the cost of inflation is felt much more sharply in small household budgets, notes Richard Obuchi, a professor of public policy at Caracas's postgraduate management institute IESA. So are the effects of a violent crime rate that was already high and is growing; low-income groups are also hit hardest by the declining qualities of health care, housing and public transportation.

"We work so much more than we used to," said Nancy Ortega, a maid who toils in a leafy upscale suburb each day; a year ago she worked three days a week, and now it is five. Her husband works 9 to 5 in an autobody shop, then does odd jobs for four hours after it closes, and works both days on weekends. The family saves nothing; they spend additional earnings on school fees and food. The laptop they wanted to get their older child for school has doubled in price in the past few months, and her husband had to do even more extra shifts to get the younger one a video game system for Christmas. "He said, 'Let her not feel like Santa neglects her' – he doesn't want the kids growing up like we did."

This is Mr. Chavez's Venezuela, said Luis Vincente Leon, who runs a public opinion firm in the capital. There is undoubtedly an economic crisis, "but even the poor have a high level of assets." And, now, a high level of expectations.

The runaway inflation rate and shortages call for harsh economic medicine: a currency devaluation, an end to state subsidies, a lifting of exchange and price controls. Mr. Maduro has taken steps to reform the foreign currency market, obliging those who want dollars to buy them at auction and thus pay closer to the black market rate. But he has given no sign he intends to take more dramatic steps, and risk the ire of both his base and the hard-left political powers behind him.

Mr. Obuchi, the public policy expert, predicted another year of rising inflation and greater shortages. Mr. Barrera, the screenwriter whose telenovela business has decamped to Mexico, believes the end of the Chavismo project may finally come, in an instant. "The day that oil prices so much as flicker," he said, "we become a cannibal society." 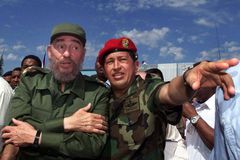 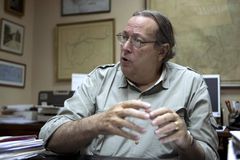 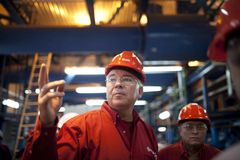