Venezuela's chief prosecutor broke with the government Friday and rebuked a Supreme Court decision stripping congress of its last vestiges of power, showing a crack in the embattled administration of socialist President Nicolas Maduro amid a torrent of international condemnation over what many decried as a major step toward dictatorship.

In a shocking pronouncement, long-time government loyalist Luisa Ortega Diaz said it was her "unavoidable historical duty" as the nation's top judicial authority to denounce what she called a "rupture" of the constitutional order in the court ruling against the opposition-controlled National Assembly.

"We call for reflection so that the democratic path can be retaken," she said to the loud applause of aides gathered around her.

The statement gave a major boost to the opposition, some of whom spent the day sparring with riot police and gearing up for what they hope will be nationwide protests Saturday.

A defiant Maduro defended the Supreme Court in an appearance on state television and said the opposition would be left with "their cold champagne, uncorked."

But he also called for renewed dialogue between the government and opposition as the only way to resolve Venezuela's political crisis. "I'm ready with whoever is willing," he said.

The Supreme Court ruled late Wednesday that as long as lawmakers remained in contempt of earlier court rulings that nullified all legislation passed by congress, the high court can assume the constitutionally assigned powers of the National Assembly, which has been controlled by the opposition for nearly a year and a half.

The United States and governments across Latin America condemned the ruling, which the head of the Organization of American States likened to a "self-inflicted coup" by the leftist Maduro. The United Nations' top human rights official expressed "grave concern" and called on the high court to reverse its decision.

Late in the day, the OAS announced that it would hold an emergency meeting at its Washington headquarters Monday to discuss the situation in Venezuela.

Opposition leaders, long-marginalized the past 17 years of socialist rule, called on other public officials to follow Ortega Diaz's example. They also urged the military, the traditional arbiter of political disputes in Venezuela, to break its silence and defend the constitution drafted by late President Hugo Chavez to which it swore allegiance.

"You have a new opportunity to show the country and international community if you are with the dictatorship or want your children and grandchildren to grow and live in a country where there's democracy and liberty," said David Smolansky, a Caracas area mayor.

Amid the turmoil, the normally ever-present Maduro was conspicuously silent until late Friday. Then he went on state TV to argue that Venezuela's institutions are operating normally and that it is his "right-wing, fascist" opponents who are attempting to break the constitutional order.

He said that in an effort to calm the political impasse he had called an emergency meeting Friday night of the National Security Council, which includes the president of the National Assembly and Venezuela's chief prosecutor.

"Like all controversy this should be resolved with dialogue," Maduro said.

National Assembly president Julio Borges said late Friday that he would not accept Maduro's invitation, likening it to a circus act put on by the same person that the opposition blames for Venezuela's crisis.

Instead Borges called for the international community to continue putting diplomatic pressure on Venezuela's government and he urged citizens to protest Saturday.

"In Venezuela the only dialogue possible is the vote," Borges said.

Maduro's foreign minister was forced to abruptly cancel a meeting with diplomats in the capital to explain the court's ruling after Colombia, Chile and Peru withdrew their ambassadors. The Mercosur trade bloc, which suspended Venezuela in December, called an emergency meeting for Saturday in Argentina to discuss the crisis.

"This clearly destroys the most important pillar of any democracy, which is popular representation," Colombian President Juan Manuel Santos said. In the past, he has been reluctant to criticize Maduro, fearing a backlash against the millions of Colombians who live in Venezuela and in recent months have been flocking home in the face of the worsening economic crisis.

A day after the Trump administration strongly criticized the Supreme Court's move and called on Maduro to free political prisoners, the State Department pointed to the OAS as the best place to address concerns about Venezuela.

OAS Secretary General Luis Almagro called an emergency meeting to discuss the crisis after two previous sessions this week ended with 20 governments led by the U.S. and Mexico voicing deep concern but no concrete actions to hold Maduro accountable.

"This is a decisive hour for the region," said Venezuelan opposition leader Henrique Capriles, who met Friday with Almagro in Washington. Venezuelans will find out "who is with the people and democracy and who is with corruption and dictatorship," he said.

In Caracas, national guardsmen in riot gear fired buckshot and swung batons at students who gathered outside the Supreme Court. Several protesters were arrested and some journalists had their cameras seized. One journalist, from Colombia's Caracol Radio, was surrounded by a dozen soldiers who swung her around by her arms and legs and appeared to hit and drag her.

Despite sporadic flare-ups of protest Friday, it wasn't clear if critics of the government were in the mood for another street fight after previous attempts fizzled or ended in bloodshed with little to show. Weeks of unrest in 2014 left more than 40 dead and dozens arrested, while a mass protest last September was followed a few days later by authorities cancelling a recall petition campaign seeking to force Maduro from office before his term ends in 2019.

What could be different this time is that Venezuela's economy is on its knees. Governments in the region, as well as the Trump administration, seem far more engaged in seeking a solution to the political and increasingly humanitarian crisis that threatens to spill beyond the country's borders.

The Supreme Court's ruling and another earlier this week limiting lawmakers' immunity from prosecution capped a feud that began when the opposition won control of the legislature by a landslide in December 2015 and then mounted a campaign to force Maduro from office.

The leftist leader, who has seen his approval ratings plunge amid widespread food shortages and triple-digit inflation, responded by relying on the Supreme Court to unseat several opposition lawmakers and then issue an order nullifying all legislation passed by the National Assembly.

The government argues that the latest ruling did not seek to supplant congress but rather to guarantee the rule of law as long as legislators remain obstructionist by refusing to sign off on a budget and key economic decisions like a plan by Venezuela's state-run oil company to form joint ventures with private companies, including Russia's Rosneft.

"It's untrue that a coup has taken place in Venezuela," the government said in a statement Thursday. "On the contrary, the institutions have taken corrective legal action to stop the distractive, coup-like actions of an opposition that has declared itself openly in contempt of the decisions made by the republic's top court." 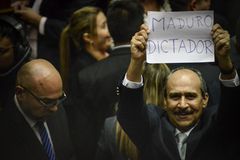