Anti-U.S. protests by crowds whipped into fury by a film that mocks Islam erupted across the Muslim world, as violence exploded in Sudan, Lebanon, Tunisia and Yemen leaving five dead on Friday and dozens injured.

The protests broke out when Muslims emerged from mosques following the main weekly prayers to voice their anger at the film made in the United States that ridicules the Prophet Mohammed and belittles the religion he founded.

President Barack Obama vowed Friday to "stand fast" against anti-U.S. violence in the Arab world, as he witnessed the return to U.S. soil of the remains of four Americans killed in Libya.

"Their sacrifice will never be forgotten, we will bring to justice those who took them from us. We will stand fast against the violence on our diplomatic missions," Mr. Obama said at Andrews Air Force base outside Washington.

In Khartoum, guards on the roof of the U.S. embassy fired warning shots as a security perimeter was breached by dozens of Islamic flag-waving protesters, part of a crowd of thousands who had earlier stormed the British embassy and set fire to the German mission, an AFP reporter said.

A police vehicle near the U.S. embassy was also torched as hundreds of demonstrators broke through an outer security cordon after one protester was hit by a police vehicle and killed, a medic and the reporter said.

The body of another protester was later found outside the embassy compound, but the circumstances of his death were not immediately clear.

Police had earlier fired volleys of tear gas in a bid to prevent the 10,000-strong crowd marching on the US embassy after they had swarmed over the German mission, tearing down the flag to replace it with a black Islamist one before torching the building.

European Commission President Jose Manuel Barroso condemned the embassy attacks as against "the rules of the civilised world."

"Nothing justifies these kinds of attacks," he said.

In Tunis, police firing live rounds and tear gas drove angry protesters from the U.S. embassy, some of whom had stormed the compound, with clashes there killing at least two people, an AFP journalist said.

The demonstrators had managed to clamber over a wall after setting several vehicles alight. Protesters also ransacked and torched an American school in Tunis, the TAP news agency reported.

Violence also erupted in the northern Lebanese city of Tripoli, where a crowd of 300 Islamists attacked and set fire to a KFC restaurant, sparking clashes with police in which one person died and 25 were injured, security sources said.

The attack came as Pope Benedict XVI arrived in Lebanon for a three-day visit, calling for Christian-Muslim coexistence and attacking religious extremism.

And with tempers boiling across the Muslim world over the movie since the U.S. ambassador to Libya was killed in an attack on an American consulate in Benghazi on Tuesday, the Pentagon said it has sent a team of Marines to Yemen.

With much of the anger directed at the United States, where the film was made reportedly by a Coptic Christian Nakoula Basseley Nakoula and promoted by a rightwing pastor, Washington had earlier ordered heightened security at its embassies worldwide.

In Cairo, where the first protests against the film broke out on Tuesday, protesters again clashed with police outside the U.S. embassy, an AFP reporter said.

Clashes subsided earlier when police erected a wall of concrete blocks in a road leading to the American compound. But protesters then moved to a different road and hurled stones at police who responded with tear gas.

Earlier the Muslim Brotherhood withdrew calls for nationwide protests in response to the film "Innocence of Muslims" that mocks the Prophet Mohammed, saying they would instead take part in a "symbolic" demonstration.

In Iran, thousands of people yelling "Death to America" and "Death to Israel" rallied in central Tehran.

State television showed the crowd streaming out after Friday prayers at Tehran University in which a hardline cleric, Ayatollah Ahmad Janati, blamed the United States for the crude film in which actors have strong American accents, portraying Muslims as immoral and gratuitously violent.

Protests have spread across the Middle East and further afield, including to Bangladesh, Indonesia, Malaysia, Kashmir, Pakistan, Iraq, Israel and the Gaza Strip, Morocco, Syria, Kuwait, Nigeria and Kenya.

Violence also erupted in Asia, with police saying 86 people were arrested after attacking the U.S. consulate in the Indian city of Chennai.

In Kabul, hundreds of Afghan protesters took to the streets, setting fire to an effigy of Mr. Obama and demanding the death of a filmmaker who they say insulted the Prophet Mohammed.

U.S. and Libyan officials, meanwhile, are probing Tuesday's attack on the consulate in the eastern Libyan city of Benghazi that killed ambassador Chris Stevens and three other U.S. officials, amid growing speculation it was the work of extremist militants rather than just demonstrators.

U.S. military and intelligence agencies have launched an elaborate manhunt in Libya for the militants suspected of staging the attack, American officials and experts said.

The head of Libya's national assembly, Mohammed al-Megaryef, blamed Al-Qaeda for the attack and said he regretted the loss of "a friend of Libyans who rendered laudable services to Libya."

The United Nations on Friday evacuated its expatriate staff in Benghazi to Tripoli "temporarily" for security reasons, a spokeswoman for the UN Support Mission in Libya said.

Washington sought to keep a lid on the demonstrations by spelling out that the controversial film was made privately by a small group of individuals with no official backing. 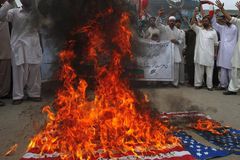 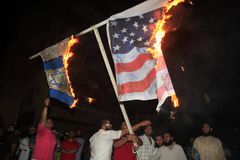 U.S. ratchets up security in face of fury in Arab world
September 13, 2012 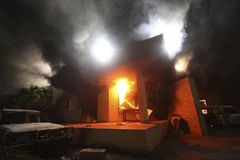