Among Egyptians, the colloquial nickname for the Arab world's most populous nation is Umm Al Dunya, or "the mother of the world" – a term often employed when arguing why, despite two and a half years of post-revolution instability, Egypt possesses enough religious and societal harmony to avoid falling into the same spiral of bloody, often sectarian violence that many of its neighbours have seen.

That argument became much harder to make after a vicious crackdown on supporters of ousted President Mohammed Morsi left hundreds dead Wednesday, top Muslim Brotherhood leaders preparing for all-out civil war and Egypt's "roadmap" to civil democracy in tatters. As the chaos unfolds, Egypt's Western allies – particularly Washington, which has over the past decades warily offered its support to former president Hosni Mubarak, then Mr. Morsi and now the military-led government – have increasingly become unable to predict or influence events in Cairo.

Rather than ease the country away from religious extremism, as many of its supporters had hoped, the military-led removal of Mr. Morsi has spawned dozens of increasingly bloody confrontations across Egypt, culminating in Wednesday's forced dispersal of the weeks-long, Muslim Brotherhood-led protests. Images of bodies strewn about the floors of mosques and field hospitals – coupled with a military-mandated curfew – reinforced the impression that Egypt's post-revolution rulers, be they aligned with the Muslim Brotherhood or the military, still wield power in the manner of dictators.

"One point is clear: Egypt has ventured yet further along the completely wrong track," said Hassan Hassan, deputy comments editor at The National newspaper in Abu Dhabi. "Egyptians across the political spectrum desperately need to find common ground if the country's fledgling democracy is to become established.

"Instead, they are now more divided than ever before."

A series of decisions this week by General Abdel-Fattah el-Sissi's interim government this week – including mandatory curfews, a number of political appointments and now the violent assault on Brotherhood encampments – indicates two stark changes in strategy. First, the military-led regime has lost patience with the Muslim Brotherhood. Second, the military may no longer be interested in simply running the country for the short-term.

A day before Wednesday's violence, the interim government announced 25 new provincial governors throughout Egypt. The vast majority of those appointees were military and police generals, many with ties to the Mubarak regime. None of the governors previously appointed by ousted president Morsi who didn't already have a security forces background were allowed to keep their jobs.

"The initial indications are towards the military retrenching its position and playing a very big role in Egyptian politics," said Jeffrey Martini, a Middle East analyst at the RAND Corporation, a global policy think tank. "You see a lot of people saying [Gen. Sissi] should take up the responsibility and run for president ... these are troubling trendlines."

Mr. Martini noted that the military's growing role in domestic Egyptian politics is especially worrying because it comes at a time when many members of the military-appointed interim government are from minority liberal groups. As such, they owe their positions of authority to Gen. Sissi, not popular electoral support.

Once viewed with deep suspicion by many leaders of the revolution for allegedly undertaking or failing to respond to several violent incidents against Egyptian civilians in the last two years, the military has enjoyed a surge of support in recent weeks. That's in large part due to dissatisfaction with Mr. Morsi's rule, and a growing perception that the former president was only interested in strengthening the Brotherhood and putting an Islamist stamp on the country's new constitution.

It is that perceived support that has, in turn, allowed the military to treat pro-Morsi protesters with a degree of force that would have been considered extreme even during Mr. Mubarak's tenure.

The likelihood that Wednesday's crackdown will silence the Brotherhood once and for all appears slim at best. In fact, the movement's leaders seemed even more adamant than ever on Wednesday, praising the hundreds killed as "martyrs" and urging Egyptians to rise up against the military government.

Despite heavy loss of life, Brotherhood organizers were also buoyed by myriad condemnations of the military assault by senior figures in Washington and across Europe who expressed deep concern at the bloodshed. Egyptian vice-president Mohamed ElBaradei, one of the best-known politicians in Egypt, also resigned his post on Wednesday, in protest against the ongoing violence.

Throughout the day, senior Brotherhood leaders took to the streets and the airwaves to call for more defiance. In one interview, senior Islamist leader Mohamed Beltagy said his 17-year-old daughter had been killed by security forces, but that he would not be dissuaded from opposing the military-led government.

"I swear to God that your brothers...haven't given their lives except for you, the Egyptian people," he said. "Come down now to Egypt's cities to announce the end of the military coup and an end to the police state and a demand that Egypt remain a civil democratic state."

While it may resonate with the Brotherhood's base, Mr. Beltagy's statement ignores the fact that very large swaths of Egyptian society are deeply antagonistic to the country's largest Islamist movement. Mr. Morsi's victory in last summer's presidential elections came by a tiny margin over his opponent, who was hampered by his ties to the Mubarak regime. The president's largely ineffectual time in office did little to endear him to anyone outside his base, and tens of millions of Egyptians cheered his removal by the military six weeks ago. Indeed, many Egyptians took to the Internet on Wednesday to support Gen. Sissi's crackdown on the group, calling it both right and necessary.

Even many Egyptians opposed to Gen. Sissi's rule found it difficult to sympathize with the Brotherhood's supporters, especially after widespread reports that multiple churches across the country had been torched, allegedly by Brotherhood members. There have also been widespread allegations that the Brotherhood's own protesters have attacked and killed security officers.

Nonetheless, the Brotherhood remains perhaps the largest, most organized political group in Egypt. And having endured countless such crackdowns during its almost century-long existence, it is unlikely to simply accept the new order.

"I thought that the army would have learned from previous experience that violently breaking up protests leads to more blood," said Mohamed El Dahshan, an international development consultant and co-author of Tahrir Diaries, an account of the Egyptian revolution.

"The violence doesn't disperse the protest, it just displaces it. The Brotherhood will go somewhere else and they will be angry."

With observers waiting to see if Wednesday's violence was a single-day event or the beginning of continual bloodshed, both Egypt's military and its largest Islamist group have made clear that they are not willing to compromise. In fact, the two groups appear more antagonistic now than at any point since the start of the revolution.

At times, officials with the military and the Brotherhood presented such differing assessments of the violence, they appeared to be describing entirely separate incidents. In a statement, the "Anti-Coup Alliance," which often speaks on behalf of the Brotherhood, described Wednesday's violence as the latest in a series of "massacres," claiming that security forces killed more than 2,000 peaceful citizens and injured another 10,000.

Interim Egyptian prime minister Hazem El-Beblawi, on the other hand, publicly praised security forces for their "self-restraint," and officials from the ministry of health initially pegged the number of protesters killed around the country in the low hundreds. That estimate, like the one given by the pro-Morsi group, appeared out of step with accounts from reporters on the ground, although the chaotic situation made an accurate death toll difficult to obtain.

Prior to the latest round of violence, there had been some indications that the two sides may try to reach some kind of compromise, perhaps in a process mediated by a neighbouring regional power such as Qatar. That outcome seems far less likely today.

"The problem with the Brotherhood is that it is dismissive of any initiative to resolve the crisis," said Mr. Hassan of the National newspaper. "But an even greater onus has to be on the military to set the tone through restraint and compromise because they are the custodians of power.

"Egypt is not yet at the point of no return, although it is certainly further down that path than it was only a few days ago."

Why political Islamic movements are under fire
August 6, 2013 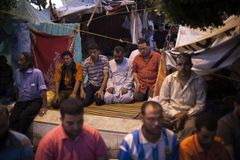