Ted Cruz has triumphed over Donald Trump and Marco Rubio in the first electoral contest of one of the most unpredictable U.S. presidential races in history.

The hard-right, Canadian-born Texas senator took 28 per cent of the vote in the Republican Iowa caucuses Monday night. Real estate mogul Mr. Trump narrowly placed second ahead of Mr. Rubio, the only mainline GOP candidate to crack double-digits, at 24 per cent and 23 per cent, respectively.

A few months ago, no one would have given Mr. Trump, Mr. Cruz or Mr. Sanders any hope of winning the White House. But all have mounted strong challenges to their parties' establishments.

Mr. Cruz outhustled his opponents on the campaign trail, staging four or five town halls and rallies every day, and built a formidable organization in Iowa.

A relatively subdued Mr. Trump sounded humbled for the first time in the campaign as he pronounced himself "just honoured, I'm really honoured." Then, he vowed to win the next states in the contest: "We're at 28 points ahead, okay … it's going to be a great week and we're going to be up here next week and I think we're going to be proclaiming victory."

For the Republicans, who had 12 candidates running in Iowa, the caucuses will help winnow the field. This could be particularly important for Mr. Rubio, who will be looking to use the result to consolidate mainstream Republicans around his candidacy and sell himself as a bulwark against Mr. Trump and Mr. Cruz. Mr. Rubio, a Florida senator, particularly needs former Florida governor Jeb Bush, New Jersey Governor Chris Christie and former Ohio governor John Kasich to flame out so he can scoop up their supporters. The first candidate to drop out was former Arkansas governor Mike Huckabee, who posted just two per cent after winning Iowa eight years ago.

Mr. Rubio congratulated Mr. Cruz Monday, even as he tried to strike an implicit contrast with him by emphasizing the sunnier tone of his campaign.

Mr. Sanders's strong finish, meanwhile, will help him be taken seriously as a challenger to Ms. Clinton – a status he hopes to solidify in next week's New Hampshire primary, one state over from his home. He attracted young voters in droves with blistering attacks on Wall Street and moneyed interests, as well as promises of big-ticket social programs, including universal health care and free university tuition.

The Iowa result likely signals a protracted battle for the nomination and stokes doubts about Ms. Clinton's ability to fire up the Democratic base.

Ms. Clinton, who has spent much of the campaign painting Mr. Sanders's ambitious promises as unrealistic, made a leftward shift in her speech Monday in an attempt to affirm that she shares his values.

"I am a progressive who gets things done for people. I am honoured to stand in the long line of American reformers who make up our minds that the status quo is not good enough," she said. "I know that we can finish the job of universal health care coverage for every single man, woman and child. … I am excited about really getting into the debate with Senator Sanders about the best way forward."

The result also caused former Maryland governor Martin O'Malley, who took less than a percentage point, to suspend his campaign.

The race for the presidential nominations unfolds state by state over the course of more than four months, as supporters of each party choose the state's delegates to national conventions in the summer. The next states to vote are New Hampshire, South Carolina and Nevada.

Candidates on the far flanks of both parties have dominated the narrative of this election year.

Mr. Cruz is running an ultraconservative campaign, promising to slash the size and reach of government, abolish Obamacare, institute a flat tax and fight against access to abortions. Mr. Cruz is also turning his apparent unlikeability – he has earned the ire of his own party in Washington for defying party leaders in Congress and repeatedly trying to shut down the government during budget standoffs with Mr. Obama – into a plus on the campaign trail.

"When we launched this campaign, the New York Times opined, 'Cruz cannot win, because the Washington elites despise him,' " he said at a rally in Ames this weekend. "I kind of thought that was the whole point of the campaign!"

He has sold himself as the most ideologically pure of the GOP candidates. He even took a contrarian stand on the country's ethanol mandate. Most candidates defend the mandate, which obliges oil companies to use a percentage of the substance in fuel, because much of the ethanol is produced from Iowa corn. But Mr. Cruz vows to abolish it, along with all other corporate welfare. This sort of consistency plays well with his supporters.

"Where this country went wrong is we have so many special interests, and ethanol is just one more special interest, that Iowans happen to have," said Darren Dea, a 48-year-old engineer, at the Ames rally. "It just isn't right."

Added his wife, Amy Dea, 48, a wine saleswoman: "I vote my values. I answer to God in the end and so I feel responsible to my children to do what I believe. Ted Cruz walks the walk."

Mr. Cruz, however, has taken heat over his Canadian birth. Mr. Trump argues Mr. Cruz, who was born in Calgary and moved to Texas as a child, might be ineligible to become president. Mr. Cruz contends that because his mother is American and he received U.S. citizenship at birth, he is eligible.

Mr. Trump, for his part, is riding a wave of populist and xenophobic anger, promising to stop Muslims from temporarily immigrating to the United States, build a wall along the Mexican border and tear up free-trade agreements.

He eschewed the retail politicking and meticulous ground game that defines politics in this Midwestern state of 3.1 million people. Instead, he preferred to jet in from New York for rallies and slam his rivals on cable TV. His sincerity is also in doubt: He has made statements in the past supporting a woman's right to choose, backing universal health care and lauding Ms. Clinton, all positions he has reversed.

Despite these deficiencies, his events here have drawn enthusiastic crowds in the thousands. Even Mr. Trump's meandering, unpolished speaking style is taken by supporters as a sign of authenticity.

Jerry Thompson, a 55-year-old factory worker supporting Mr. Trump, said he was attracted partly by the candidate's promise to tear up NAFTA and partly "because he's not a career politician."

"Both Democrats and Republicans … they're not looking out for the peoples' interest, they're working on their own interest, they're making backroom deals," Mr. Thompson said on the sidelines of a Trump rally in the college town of Pella. "The government is pretty good at ruining things."

In the final days of the campaign, college students flooded the state to pitch in on his campaign.

"Bernie is very genuine and he's very constant … we haven't seen any politicians growing up who are particularly populist," said University of Illinois student Mary Jane Oviatt, who came to Iowa with a group of friends to help pull the vote for Mr. Sanders in the final weekend. "He doesn't have any SuperPACs, he's not controlled by big money."

Added her friend Ruthie Sussman: "As a society, we need to take care of each other, and I think Bernie Sanders really embodies that."

Ms. Clinton, for her part, countered with an appeal to pragmatism, arguing Mr. Sanders could not realistically get his ambitious agenda passed by a Republican-controlled Congress.

"I don't want to over-promise and under-deliver. I'd rather under-promise and over- deliver," Ms. Clinton told one of her final rallies Sunday.

She also played up her chance to make history as the first woman in the Oval Office. And she learned the lessons of 2008 by investing heavily in an Iowa ground game, dispatching an army of paid staffers and opening field offices across the state months ahead of the vote. 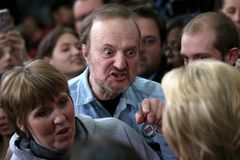 Five questions you probably have about tonight’s Iowa caucuses
February 1, 2016 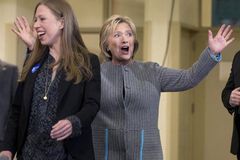 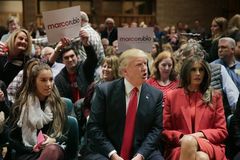