Japan faces a new chill of international isolation after Chinese leaders shut their doors to Japanese prime minister Shinzo Abe, who has provoked widespread regional anger with a trip to a controversial war shrine.

"The Chinese people do not welcome such a Japanese leader, nor will Chinese leaders meet with him," Qin Gang, spokesman for the country's foreign ministry, said Monday.

Mr. Abe paid a visit to the Yasukuni Shrine in Tokyo, where some 2.5-million war dead are memorialized, including a number of war criminals whom Mr. Qin called "fascists and Nazis of Asia." For a sitting Japanese prime minister to attend the shrine – for the first time since 2006 – constitutes tacit approval of a military history that saw Japanese soldiers inflict terrific suffering across Asia, in China's view. The visit is a "whitewash" of "the history of aggression and colonial rule by militarist Japan," and a "willful trample on human conscience," Mr. Qin said.

The Chinese cold shoulder comes amid broad international condemnation that has seen Japan rebuked by its closest allies and neighbours, raising new fears that the economically resurgent country will also be made to suffer financially. The shrine visit comes as Mr. Abe increases Japan's defence spending – a source of real anger among countries once victims of the country's military aggression – and Tokyo engages in a protracted dispute with Beijing over the ownership of islands in the East China Sea.

"Japan is currently in a situation that's really quite bad in all of post-war history," said Nakano Koichi, a professor of comparative politics at Sophia University in Tokyo. "It's a very, very sorry situation that Abe has put Japan in."

The U.S. has spoken out against the shrine visit, as has South Korea, whose President Park Geun-hye on Monday also raised the possibility of diplomatic repercussions.

"I hope that there won't be any act of breaking down country-to-country relations ... by digging up the wounds of the past," Ms. Park said during a regular meeting with her aides, according to South Korean media pool reports posted on the website of her office.

Ms. Park didn't cite Japan by name but her office said she was referring to Japan.

Also Monday, North Korea's state media said that Abe's shrine visit was tantamount to a "declaration of war" against people in Asia and the rest of the world.

"Japan has now turned into a war state deviating to the right and fascism," the official Korean Central News Agency said in a commentary.

Leaders in Singapore and Taiwan have similarly spoken out against Japan, and the shrine visit was also discussed by the foreign ministers of China and Russia. According to China's official Xinhua news agency, Russian foreign minister Sergey Lavrov holds a "completely identical stance" to China on the visit. "Russia opposes [Mr.] Abe's visit to the shrine, deeming it provocation to its Asian neighbours," Xinhua said.

The Chinese response has, by the standards of its often hot-tempered relations with Japan, been muted. Last September, in one of the many flareups over the two countries' islands dispute, thousands of rioters descended upon the Japanese embassy in Beijing. Armed with stones, eggs and bottles, they attacked security forces and waved signs calling for war against Japan.

Recent days have not seen a repeat of such high-profile political hooliganism. Though additional security is visible at the embassy in Beijing, there have been no mobs. In part, that may be because they aren't needed. This time, China is not alone in its dispute with Japan, and it may have more to win by taking the higher ground.

"Japan is losing support internationally. So if China reacts with moderation, it becomes a more credible actor. And so increasingly, the U.S. leaders might think are better off dealing directly with China," said Mr. Nakano, the Sophia University professor.

Still, the country faces risks. China in the past has shown a willingness to punish Japan through export restrictions, arrests of Japanese nationals and boycotts of Japanese goods – a particularly jarring reversal given that, for all the noise over China's establishment of an air defence identification zone, tensions between the two Asian giants had looked as if they might relax.

"Just before the visit to the Yasukuni shrine, the Chinese ambassador to Japan had a talk with the foreign minister of Japan, and both sides declared they would try to resume a so-called bilateral relationship with strategic reciprocity. But I don't think it can be done now," said Yu Tiejun, an associate professor in the Peking University School of International Studies.

"For several years, the Sino-Japanese relations will be very bad," Mr. Yu said. 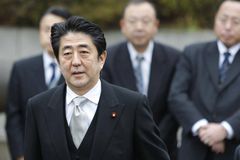