The first CIA operatives dropped into Afghanistan's Panjshir Valley on Sept. 26, 2001. Linking up with Northern Alliance fighters, they paved the way for an American-led war against the Taliban, which officially kicked off with a massive bombing raid two weeks later.

That first phase of Operation Enduring Freedom was swift and relatively painless. Victory was decisive, with the Taliban government ousted in a matter of weeks. When the North Atlantic Treaty Organization entered the fray two years later – its first "out of area" mission beyond Europe – Afghanistan was viewed as a crucial test of the coalition's political will and its military capabilities.

But the focus of the mission had already begun to drift. The coalition faced the amorphous task of stabilization and reconstruction, which, in practical terms meant everything from fighting a resurgent Taliban to building an Afghan army from scratch to helping Hamid Karzai's government stage counternarcotics raids. While NATO agreed on the goals, there was never any road map on how to reach them.

Judged against the weight of those enormous expectations, it is no wonder that after a decade of war in Afghanistan NATO has come up decisively short. Within the coalition, the mission deepened divisions between member states and snapped them into focus. In Afghanistan, NATO failed to live up to its own hopes on nearly every count.

Today the war-weary coalition continues to chase a difficult strategy, seeking to both defeat the Taliban and at the same time trying to negotiate with them. All of this in the face of increasing violence. Almost since the war began more coalition soldiers have died, year after year.

As the conflict drags on, it has given way to finger-pointing. In June, outgoing U.S. defense secretary Robert Gates accused certain members of the coalition of not pulling their weight in Afghanistan: "The [mission]has exposed significant shortcomings in NATO – in military capabilities and in political will," he said.

Just a few weeks ago, NATO found its own headquarters under attack by Taliban militants who had infiltrated the Green Zone in the heart of Kabul, an incident that seemed to underscore how far security has slid in the capital, which in 2003, the International Security Assistance Force set out to protect.

The result of the last decade? "NATO is more experienced but weaker," said Stanley R. Sloan, author of Permanent Alliance? NATO and the Transatlantic Bargain from Truman to Obama.

From the outset, NATO had trouble persuading some of its member states to contribute forces to ISAF. Over the years that problem has morphed into some countries placing restrictions on how their forces could be deployed, which complicated things on the battlefield.

So while Canadian soldiers died fighting in Kandahar, Germans were hamstrung by strict rules of engagement that, until 2009, did not even allow them to shoot at an attacker on the run.

Other aspects of the Afghan mission are also undermined by division. Provincial Reconstruction Teams (PRTs) – civilian military units designed to extend the reach of the central government – were unevenly funded and run depending on which member state is responsible. In NATO's evolving role in the Afghan governments campaign against drugs, some member states allowed their soldiers to engage in counternarcotics while others did not.

NATO, of course, is not the only place to cast blame for the failures of the mission in Afghanistan.

"The alliance was undermined in a big way when the United States shifted its focus to Iraq. Afghanistan became Iraq's poor stepchild. That was the United States's fault, but it hurt NATO," Mr. Sloan pointed out.

Even a weakened coalition, he argues, is better than none at all.

"Some people say that after Afghanistan the alliance should come to an end. I don't buy it. What's the alternative?" he asks.

Alexander Moens, a professor of international relations at Simon Fraser University, argues the most important "progress points in Afghanistan have a clear NATO mark on them." He cites the opening of marketplaces in Kandahar, the building of schools and the creation of infrastructure.

"Whatever comes to Afghanistan in the long run it will be because NATO made a positive contribution," he said.

But it is unclear whether NATO's relatively new goals of liberal intervention and nation-building hold the alliance together.

One opinion poll conducted by the highly regarded German Marshall Fund found the percentage of European respondents favouring the support of democracy around the world has remained high since 2005 when it reached 74 per cent; today it stands at almost 70 per cent. On the other hand, support for spreading democracy has declined in the United States from 52 per cent in 2005 to 37 per cent today.

"NATO's image has always been quite weak," Dr. Moens says. "But at the end of the day it's hard to see how people can come out of a failed Afghanistan praising NATO. Everyone underestimated the complexity of the problem." Violence, revenge, kidnapping: A 'normal' day in Kabul on a historic anniversary
October 7, 2011 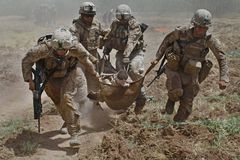 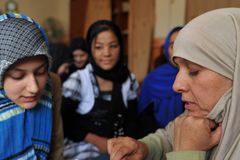 Army-building is nation-building in Afghanistan
October 5, 2011 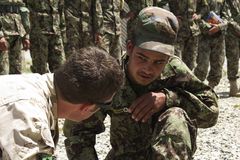