When Mayor Jesse Parker saw fire trucks and police cars roaring past his house in this sleepy rural town, he got right in his car and followed them. When they stopped in front of a burning church, all he could think was: "Here we go again."

Twenty years ago, in June, 1995, the Ku Klux Klan burned down the Mount Zion African Methodist Episcopal Church as part of a series of church burnings that shook the South that year and the next. The congregation rebuilt in a nearby location, beside a main road so it would be less isolated and prone to attack. Bill Clinton, president at the time, came to to Greeleyville, S.C., to rededicate it.

Now the church was on fire again. Mr. Parker watched as flames rose from the roof on Tuesday night – a searing image for anyone who lived through the bad old days of the South. "It makes you think of the things that happened in the South when we were getting away from slavery during the civil-rights time here, with church burnings and bombings," said Mr. Parker.

In this case, the fire seems to have been started by natural causes. A lightning storm passed through the town on the night of the fire.

South Carolina's State Law Enforcement Division now says investigators found no evidence of criminal intent. It said they reached that conclusion after an examination of the scene, analysis of debris, witness statements and a lightning strike report.

Seven predominantly black churches across the South have been struck by fire since South Carolina Governor Nikki Haley announced on June 22 that the state would move to bring down the Confederate flag that flies on the grounds of the state capitol. She made the decision after a 21-year-old man who had posed with the Confederate flag in racist online postings was charged with killing six women and three men at Bible study in a historic Charleston church.

Is this some kind of backlash against the plan to remove the flag? There is no evidence of that yet.

All the same, the church fires have raised suspicions and stirred bad memories. "All these black churches burning, it can't be a coincidence," said Marva Session, 72, a retired guidance counsellor who stopped by the burned-out shell of the church in Greeleyville on Thursday to show sympathy. "Lightning is not just going around and hitting black churches, unless God works in ways we don't understand."

Her friend Mary Darby, 76, a retired teacher, came to see Mr. Clinton rededicate the church 20 years ago. She even shook his hand.

She goes to another African Methodist Episcopal, or AME, church, and came to show solidarity with Mount Zion, which has a congregation of 65. Because the fire came so soon after the June 17 massacre at the Emanuel AME Church in Charleston, she wondered right away if there was some link.

"It happened right after the Emanuel Nine," she said, referring to the nine dead in Charleston, "and so I thought, 'Oh, no, it's us again.'"

The smell of smoke lingered over the ruined church on Thursday afternoon. The brick walls were still standing and a charred white cross still hung from the facade, but, inside, charred floor joists, a blackened fridge and some melted chairs were all that was left.

The pastor, Rev. John Taylor, stopped by to talk to an insurance man about how much he could claim for the damage and whether it would be enough to pay for rebuilding.

Mr. Taylor said that given the weather at the time, his first thought on hearing about the fire was that lightning was to blame. "I would never want to believe that something negative would happen to the church."

He said that in the nine years he has led Mount Zion, "we've had no kind of trouble or anything like that. All the people around here, to me, have been very nice, very kind folks who worked well together."

Burnings and bombings of black churches made headlines across the South when civil-rights leaders were fighting segregation in the 1960s. The worst attack, on the 16th Street Baptist Church in Birmingham, Ala., in 1963, left four girls dead.

Another wave of church burnings came in the mid-1990s when South Carolina was debating whether to take down the Confederate flag from the dome of the capitol. Mount Zion went up in flames on June 20, 1995. Authorities at first called it accidental, but two Klan members later pleaded guilty to starting the fire.

Opinion
Charleston should teach us that terror laws need to be drafted with care
June 30, 2015 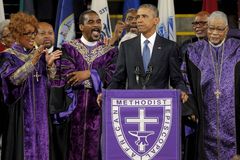 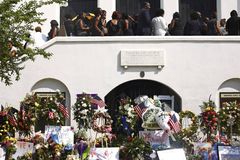