It sounds like the plot of a Hollywood horror movie: a city where people drop dead from hidden deadly gases, where molten lava could erupt through the streets at any moment.

Welcome to Goma, the world's most dangerous city. Not only is it located in the midst of a war zone, where civilians are routinely slaughtered or raped by soldiers and rebels, but it is also the most volcano-threatened city on Earth.

Its million inhabitants are at risk of being killed by red-hot lava flows or asphyxiated by invisible pockets of carbon dioxide.

Goma's idyllic location, on the leafy green shores of beautiful Lake Kivu, gives little hint of the potentially devastating threats in the mountains that loom around the city, where Africa's most active volcanoes are smouldering menacingly.

In 2002, about 100 people were killed by the eruption of Mount Nyiragongo, the closest volcano to the city.

Lava flowed into the centre of Goma, destroying nearly a fifth of the city, triggering fires and explosions, and leaving 120,000 people homeless.

Since then, experts say, the volcano's underground fissure has moved closer to Goma, perhaps underneath the city itself - so the next eruption might explode from beneath the feet of the people who live here.

Another nearby volcano, Mount Nyamulagira, erupted two months ago and spewed lava for 10 kilometres into the surrounding land, poisoning the drinking water in a vast rural district. It was the 26th eruption of that volcano in the past seven decades.

Meanwhile, scores of people in Goma have been killed by invisible, odourless bubbles of carbon dioxide - known here as mazukus ("evil winds" in Swahili) and once thought to be sorcerers. The pockets of toxic gas are lurking in the low-lying land between the lake and the volcanoes, even within the city itself, killing people before they know it.

Some say the city and its people should be relocated to a safer site, 30 kilometres away. Instead, the city keeps growing bigger. When much of the city was destroyed in 2002, people simply rebuilt their houses and roads, using the rock debris from the volcano.

Asked about the volcano threat, Goma's residents shrug fatalistically. "I've spent most of my life here, and my children have known no other place," one man says. "I can't afford to go somewhere else. Yes, the volcano can destroy the city, and nobody can know the day or the year. But it would be very difficult for us to leave."

To manage the threat, the UN and the European Union have poured millions of dollars into the Goma Volcano Observatory, a collection of buildings on a hillside in Goma with a view of Mount Nyiragongo about 17 kilometres away.

The observatory staff are closely monitoring the volcanoes with seismographs and other data-collection systems. They are working on emergency plans, evacuation routes, siren systems, warning signs, maps of the mazuku pockets, and educational campaigns to teach children what to do if a volcano erupts. And they are trying to predict when the next eruptions will occur - a potentially life-saving achievement if they can do it.

But they face tremendous obstacles: government corruption, shortages of funds, a lack of qualified staff, and the ravages of the Congo war, which often spills over into the city.

The lack of resources can be embarrassing. When an observatory technician wants to study an ominous-looking plume at the top of the volcano, there is no telescope or high-tech camera available. He has to pick up a pair of old-fashioned binoculars, trot to the edge of the hillside and peer in the direction of the crater.

The observatory set up seven seismic monitoring stations around the volcanoes to check for underground activity. But four of the seven stations were looted and destroyed during the fighting among soldiers and rebels in recent years.

"We are begging donors and partners to come with us in order to rebuild an efficient seismic network," says Dario Tedesco, an Italian volcanologist with experience at Mount Vesuvius who has worked on and off at Goma since 1995.

"Goma and its surroundings are by far the most hazardous area in the world. The city is facing the greatest natural hazard ever seen."

Since the devastating eruption of 2002, Prof. Tedesco has been working full-time with the UN to try to revive the Goma observatory. But the results have been not good enough, and there needs to be a big improvement in scientific capacity, he says. "It seems to me that we've been going backward."

If the closest volcano erupts again, it might be impossible to evacuate Goma's million inhabitants before the lava sweeps through the city, experts say.

In the past two years, the observatory's scientists have educated 70,000 children about the risks of the volcanoes, and they plan to reach another 70,000 in the near future. "Most of them don't even know the dangers that they're facing every day," Prof. Tedesco says. "Through the children, we can reach the parents."

But the scientists have given up on trying to relocate the city. "There is no historical case of a city moving because of a volcano," says Innocent Badriyo, a technician at the observatory.

"People have a friendship with their land. You can't ask people to leave their town. They always stay. It's the place of their ancestors." 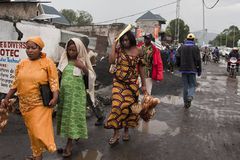