If Arab states, plus NATO member Turkey, join a coalition to take on Islamic State militants, they bring both formidable weaponry and some hesitation about participating in an American-led fight. Here's a look at what they could offer:

Here's a look at what they could offer:

Oil-rich U.S. allies in the Gulf, particularly Saudi Arabia and the United Arab Emirates, have some of the region's best-equipped militaries, and they could theoretically provide air support to a broader international coalition against Islamic State militants. They operate Western-made fighters like the F-15 and F-16, attack helicopters such as the AH-64 Apache, and transport and refuelling aircraft. The Emirates and Qatar both sent warplanes to take part in the NATO-led aerial campaign over Libya in 2011 that helped lead to the ouster of Moammar Gadhafi.

Continued access to Gulf military bases and permission to operate from them will also be key, even if host countries are reluctant to acknowledge their facilities are being used.

Some U.S. missions over Iraq are already being flown out of al-Udeid air base in Qatar, where the Pentagon operates an advanced air operations centre. Other missions are being launched from the aircraft carrier USS George H.W. Bush, which is currently in the Persian Gulf. The U.S. Navy's Fifth Fleet is based in the island nation of Bahrain, and Western navy vessels frequently dock at Emirati ports such as Dubai's Jebel Ali. Kuwait, on Iraq's southern border, was the main staging ground for the 2003 U.S.-led invasion of Iraq and it continues to host American troops.

The Gulf states also could be a major source of funding for humanitarian aid if the refugee crisis spreads as a result of the fighting, or for weapons shipments to fighters allied with the anti-Islamic State effort. Saudi Arabia also enjoys links to Sunni tribes that span into Syria and Iraq, and could use those connections – coupled with the kingdom's deep pockets – to help reclaim local communities from the extremists.

Jordan is wary of playing too prominent a role, despite its close ties with the U.S. But the kingdom already hosts a clandestine U.S.-led program that vets and trains a limited number of Syrian opposition fighters. Fayez al-Dwairi, a former Jordanian army general and military analyst, says the kingdom won't agree to an active military role in a coalition, but that it could offer intelligence co-operation and put its airfields and army bases at the disposal of U.S.-led forces.

Jordan, like Saudi Arabia, has strong relations with top Sunni tribal leaders in Iraq and Syria, many of whom are now based in Jordan. Al-Dwairi said that Amman could use those connections to help create local forces among the tribes to fight back against the Islamic State militants – an effort modelled on the famed tribal militias that joined forces with the U.S. to help crush al-Qaeda in Iraq several years ago.

The only NATO member in the Mideast mix, Turkey shares an 810-kilometre border with Syria, and a 350-kilometre frontier with Iraq. By its geography alone, Turkey is important because of the access it lends to the territory currently controlled by the Islamic State group in northern Syria and northern and western Iraq.

Theoretically, Ankara could make use of its modern army and air force that flies F-16s, offer deeper co-operation with its intelligence service that has been on the front lines of the Syria conflict for years, and allow the use of Incirlik air base in southern Turkey for strikes. Turkey also could tighten its border controls to curb the flow of foreign fighters into Syria and the smuggling of oil by the Islamic State group out of Syria.

So far, at least, Turkey appears reluctant to take a prominent role for two reasons: the Islamic State group holds dozens of Turkish hostages, including diplomats, and Ankara, which has an often rebellious Kurdish minority, is concerned about the advance of anti-Islamic State Kurdish forces in Syria and Iraq.

Should Egypt join a U.S.-led campaign, its contribution likely would be more on the ideological and logistical fronts. The Sunni world's most prestigious learning institute, Al-Azhar in Cairo, and Egypt's prominent Dar el-Ifta, have spoken out forcefully against the Islamic State group. This is seen as an important step in trying to peel away some of the extremists' self-declared religious credentials.

On the military front, Egypt has a large, U.S.-equipped army and air force that could theoretically take part in an air campaign, although Egyptian analysts view that as unlikely at this point. But Egypt could facilitate the passage of coalition aircraft through its airspace and serve as an important source of intelligence and political cover.

The U.S. began conducting air strikes against Islamic State militants in Iraq a month ago, and expanding that limited operation is Obama's focus. The Iraqi military almost collapsed in the face of the Islamic State blitz across the country in June. The armed forces have hung together since then, but have proven unable to roll back the extremists. Baghdad largely has relied instead on Shiite militias to do much of the heavy lifting on the front lines. But these same groups fought the U.S. for years and have been accused of committing atrocities, making them unlikely and unpalatable allies for the United States.

The U.S. is already co-operating with Iraq's Kurds in the north, and will continue to do so. But the Kurdish peshmerga has been largely outgunned by the militants and needs the U.S. and its allies to accelerate their weapons deliveries. 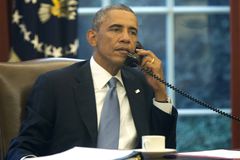