Globe reporter Mark MacKinnon slips behind the closed doors of an isolated regime and discovers that Kim Jong-il's ideological grip on citizens appears to be weakening. The following is one of six diary entries he wrote exclusively for globeandmail.com.

Ever wondered what to do with that tacky gift you got for your birthday?

Kim Jong-il has come up with the perfect solution: build a palace in the mountains an appropriate distance away, and stick all the stuff that clashes with your kitchen cupboards up there.

Like the stuffed crocodile carrying a tray of drinks that Nicaragua's Sandinista rebels thought his father, Kim Il-sung, would just love. Or that stylish but out-of-date bulletproof limousine that good old Joseph Stalin gave his family back in the day.

The so-called International Friendship Exhibition, two buildings tucked high in the Myohyangsan mountain resort area north of Pyongyang, has to be one of the odder tourist sites in the world. The front room features a map of the world with three digital numbers on it - the first counting the number of gifts received by Kim Il-sung, the second the number given to Kim Jong-il. If you're wondering, father (who apparently continues to receive gifts from admirers even 15 years after his death) still leads son in this who-is-more-loved race. The third number, which glows at 180, keeps track of how many countries gifts have been received from.

While some gave fancy cars and stuffed crocs, others were more circumspect in their gifting. A serving tray with the word "Jamaica" painted on it looked like it had been swiped from a beach bar. A small blue pinny, again from Nicaragua, seemed like something you'd receive for taking part in, but not winning, a sporting competition.

Canada, you'll be pleased to know, was among the 180 countries that showed their admiration. A polar bear skin (head still on) was sent to Kim Il-sung's by an anonymous Canadian citizen and now hangs upside-down in a glass display case. The Communist Party of Canada apparently once saw fit to present the tyrants of Pyongyang with a Group of Seven coffee table book.

After a brief stop at a nearby Buddhist temple (where a token monk spoke to us in the company of a female soldier), we made the 21/2-half hour drive to Pyongyang and were taken to one of the sites I had been most anxious to see: the Victorious Fatherland Liberation War Museum, which in another country might be called the Korean War Museum.

To visit the museum, in north-central Pyongyang, is to be told to forget everything you know about what happened in the 1950-1953 conflict. The official view put forth by the North Korean government has nothing to do with what's in Canadian history books.

In a succession of films, murals and moving battlefield mock-ups, visitors are pounded with a single message: that it was the United States that started the war on June 25, 1950 and that the Korean People's Army eventually handed the superpower an embarrassing defeat.

"Some of the Americans who come argue and say this isn't the case," said our tour guide, a cheerful woman sporting a military uniform and an unreadable smile. "But history is history. You can't change it."

Map and itinerary of the trip 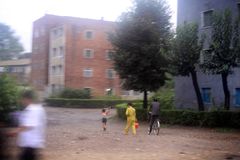 Follow Mark MacKinnon on Twitter @markmackinnon
Report an error
Due to technical reasons, we have temporarily removed commenting from our articles. We hope to have this fixed soon. Thank you for your patience. If you are looking to give feedback on our new site, please send it along to feedback@globeandmail.com. If you want to write a letter to the editor, please forward to letters@globeandmail.com.
Comments