International support is building for a Palestinian bid for United Nations recognition Thursday, a historic vote that is likely to pass easily.

The vote "implies recognition of statehood and it gives them certain privileges" and "a certain prestige," said Vera Jelinek, dean of New York University's Center for Global Affairs.

The support comes amid strenuous objections from Canada, the United States and Israel, which say a Palestinian state should only emerge out of bilateral negotiations. Prime Minister Stephen Harper personally pressured Mr. Abbas to drop his bid. And Foreign Affairs Minister John Baird has told several people, including Palestinian representatives, that he'll travel to New York to personally cast the "nay" vote, several sources told The Globe.

On Thursday, Mr. Abbas plans to ask the UN General Assembly to recognize Palestine in the West Bank, Gaza and east Jerusalem, areas Israel captured in the 1967 Mideast war. Israel withdrew from Gaza in 2005, but still controls most access.

"We are going to the United Nations fully confident in our steps," Mr. Abbas said Sunday. "We ask for a just peace, which is agreed on by the international community, which will give us our state with east Jerusalem as its capital. Without that, there is no hope at all."

UN recognition of their statehood would elevate the Palestinians to the same status as the Vatican, another non-member observer state. It would also give the Palestinians access to a range of UN agencies and also potentially the International Criminal Court.

The vote comes just a week after a cease-fire ended eight days of punishing Israeli airstrikes on the Gaza Strip and intense rocketing of the Jewish state by Gaza's Hamas rulers that reached Jerusalem and Tel Aviv.

The bid is a last-ditch attempt to rescue troubled Mideast peace efforts, a Palestinian spokeswoman said Wednesday, rejecting Israel's charge that it is an attempt to bypass negotiations.

Hanan Ashrawi, a senior Palestinian official, urged the U.S. to drop its opposition to the bid, dismissing Washington's stance as "pathetic" and harmful to American interests in the region. The Palestinians have come under intense pressure from the U.S., Britain and others to modify the bid but "have not succumbed," she said.

Israeli government spokesman Mark Regev dismissed the UN quest as futile, saying only negotiations with Israel can bring about a Palestinian state.

Unlike the Security Council, there are no vetoes in the General Assembly and the resolution is virtually certain of approval. The 193-member world body is dominated by countries sympathetic to the Palestinian cause and the resolution only requires a majority vote for approval.

However, a country's vote to raise the Palestinian status at the UN does not imply its individual recognition of a Palestinian state, something that must be done bilaterally. To date, 132 countries — over two-thirds of the UN member states — have recognized the state of Palestine.

The vote is taking place while the Palestinians themselves remain bitterly divided: Hamas, which does not recognize Israel's right to exist, claimed victory in the recent conflict and raised its standing in the Arab world, while the rival Fatah movement of President Mahmoud Abbas, which controls the West Bank, remained sidelined.

Mr. Abbas needs a solid vote in the General Assembly to strengthen his domestic position and he is flying to New York to present the case for UN recognition of the state of Palestine.

The Palestinians have focused much attention on getting support from European nations because of the clout that their backing would give to Palestinian statehood dream.

On Tuesday, France announced its support, followed on Wednesday by similar pledges from Spain, Norway, Denmark and Switzerland. Germany said it would not support the initiative. Australia plans to abstain.

The Palestinians are seeking to enhance their status because their application in September 2011 to become a full UN member state has been blocked. To become a member state, an applicant must be approved by the UN Security Council and the United States has made clear it would veto the bid until there is a final settlement with Israel.

Mr. Abbas' spokesman Nabil Abu Redeineh told AP on Tuesday that there was pressure "around the clock from all sides in order to prevent us going to the General Assembly."

But he said the move toward statehood would not be reversed and adoption of the resolution would be "a major turning point in the Palestinian-Israeli track and ... a Palestinian and Arab achievement."

The Palestinians hope to use their upgraded status to join additional UN bodies, such as the International Criminal Court, where they could attempt to prosecute Israel for war crimes or crimes against humanity.

The draft resolution makes no mention of the ICC. UN diplomats said the issue was raised during discussions with the Palestinians by some governments. Israel reportedly wanted to include assurances that the Palestinians won't go to the ICC, and that the resolution does not infringe on sovereignty, but these amendments were rejected.

Mr. Mansour told reporters the Palestinians' top priority is resuming negotiations and not going to the ICC. 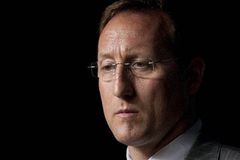