It appears the world finally has an effective Ebola vaccine.

A new study reported Friday that a vaccine designed by scientists working at Canada's National Microbiology Laboratory in Winnipeg induces a quick and highly effective response, protecting 100 per cent of the people who got it against the virus.

This is the first time an experimental Ebola vaccine has been shown to prevent people from becoming infected with the deadly disease.

The former director of the Winnipeg lab, Dr. Frank Plummer, was ecstatic about the news.

"I think it's fantastic. For the NML and the whole team that was involved in this, it's the culmination of 15 years of work. It's very, very exciting. Very, very gratifying," said Plummer, who led the lab when the work was being done. Plummer retired from that job last year.

His excitement was shared by the scientist who headed the project to develop the vaccine, Dr. Heinz Feldmann, who struggled for years to try to find a way to prove that the vaccine would work as well in people as it does in non-human primates.

"It's the day we were waiting for. And to be honest I wasn't sure if I ever would have expected this to happen during my active (career) time. But it's a great day to see this results coming out after all that work," said Feldmann, who left Winnipeg in 2008 to head a laboratory at the National Institutes of Health's Rocky Mountain Laboratories in Hamilton, Montana.

There had been high hopes that this vaccine, called rVSV-ZEBOV, would be effective if given the chance to prove itself. But in science, assumptions don't count — data do.

And the data from this trial, conducted in Guinea, are persuasive, suggested Dr. Marie-Paule Kieny, a senior author of the trial and the World Health Organization's point person for development of Ebola vaccines and drugs.

"It suggests it works, it works pretty quickly, and it works well," Kieny said.

Experts caution the 100 per cent protection rate will probably come down when the vaccine is used in more people. But the initial findings have created a lot of hope that the world will finally have a tool with which to fight Ebola outbreaks.

"It's not so often in medical research or indeed in a career when you get something quite as important and game-changing as this," said Dr. Jeremy Farrar, who heads Britain's Wellcome Trust charity. The trust was a major sponsor of the trial.

The findings are reported in the medical journal The Lancet.

The study was actually meant to continue for a longer time, but an interim analysis conducted by the trial's data and safety monitoring board this month concluded the vaccine was working.

The board of outside experts advised the researchers to stop using a control group and offer vaccine going forward to all the people who met the criteria for the study.

The study was led by the WHO and involved a variety of partners including the governments of Guinea and Norway, the Public Health Agency of Canada, Medicins Sans Frontieres and Wellcome.

It is one of several underway in West Africa trying to prove whether a number of vaccines and therapies protect against Ebola or help people infected with it to survive. But with case counts now down to a trickle — seven last week — there had been fears none of the trials would come up with definitive answers.

That this one did is a coup.

"To be able to conduct a study like this and find these results when case numbers were plummeting . . . I think is really a major public health achievement," said Michael Osterholm, director of the Center for Infectious Diseases Research and Policy at the University of Minnesota.

Dr. Mark Feinberg, chief public health and scientific officer for Merck Vaccines, which is developing the product, said the trial's design probably helped the researchers arrive at an answer, even in the face of dwindling case counts.

Feinberg said Merck is fully committed to getting the vaccine licensed in the United States, Europe and other important locations.

The trial was conducted using what is called a ring vaccination design.

The idea behind ring vaccination is to create a buffer of protection around each case, so that the virus cannot continue to spread. This is actually the way the scientists who designed the vaccine intended for it to be used.

When new cases of Ebola were diagnosed, the researchers offered to vaccinate people who had been in contact with the infected person, and the contacts of those contacts.

Some of the rings of people were vaccinated immediately. Others were told they would be vaccinated after a delay of three weeks. And then researchers watched to see how many people in the two types of rings became infected.

In the first few days, there were infections in both rings. That's not surprising; a vaccine takes time to kickstart the immune system. The researchers thought it would take about 10 days, and designed the trial to start assessing the vaccine's efficacy after that point.

The same pattern — a complete drop off in cases — was seen later when the people in the delayed rings were given the vaccine.

Kieny said discussions will now need to take place with the government of Sierra Leone to see if they want to employ a ring vaccination approach in a bid to finally snuff out the 19-month-old West African outbreak.

News of the success comes a week before the one-year anniversary of the day the World Health Organization declared the unprecedented outbreak a global public health emergency. To date there have been nearly 28,000 cases and nearly 11,300 deaths.

Last year, the Canadian government donated 800 multi-dose vials of the vaccine to the World Health Organization. Some of that donated vaccine was used in the early stage clinical trials conducted to determine whether rVSV-ZEBOV was safe for people and to decide how much vaccine each person might need. 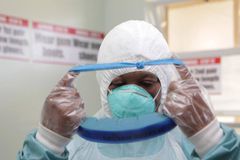