The ouster of Egyptian president Mohammed Morsi is only one of several cases of a popular backlash against the Muslim Brotherhood and related political Islamic movements throughout the region.

In Turkey, protests continue against the heavy-handed behaviour of the ruling party of Prime Minister Recep Tayyip Erdogan. There have been widespread anti-Islamist demonstrations in Tunisia and Libya following assassinations of popular secular political leaders.

It is the outcome in Egypt, however, that will have consequences for Islamist parties throughout the Middle East, for whom the Egyptian Brotherhood has long been the archetype.

It began to go wrong for Mr. Morsi shortly after he took office last summer when he ordered the army back to its barracks, and relieved General Mohamed Tantawi and several other officers of their command. For 16 months, since the fall of Hosni Mubarak, the army under Gen. Tantawi had been the executive power in the land and, by all accounts, was happy to escape the limelight.

But the move to dismiss the familiar faces upset many in Egypt because they revere the military or were just frightened by the prospect of an all-powerful Islamist leader imposing his will.

A member of the Muslim Brotherhood, Mr. Morsi had ridden the wave created by that political Islamic movement to a 51-per-cent majority victory in last year's presidential election. And there he sat – the first freely elected leader in Egypt's history.

He had made a deal with the country's liberals to establish a modern and democratic government but he wasn't living up to his end of the bargain. In November, he declared that his rulings, as well as the decisions made by the Islamist-dominated Shura Council and constituent assembly, were immune from judicial review. He also pushed through constitutional reforms over the objection of almost every other political group in the country.

His supporters blocked the entrance to the constitutional court for several weeks, preventing judges from holding court, while security forces stood by. To end media criticism, another group of supporters carried out a daily slaughter of farm animals outside the offices of several broadcast companies. The animals wore masks painted in the image of various media personalities.

"It was our Iran moment," said Ezzedine Choukri Fishere, a politics professor at the American University of Cairo and former adviser to the minister of Foreign Affairs. "There was no legal recourse … so, we had to take our fight for democracy back to the streets."

Ignoring the growing protests, Mr. Morsi announced the appointment of 17 Brotherhood-affiliated governors, including a member of Gamaa Islamiya in Luxor, a town where the group had killed 58 foreign tourists in 1997.

"Egypt was not moving to democracy," Prof. Fishere said, "but towards Islamist authoritarianism."

General Abdel Fattah el-Sissi, the new commander of the armed forces, came to oppose the government because of its Islamist nature.

Mr. Morsi, Gen. Sissi said recently, was "not a president for all Egyptians, but a president representing his followers and supporters."

Brotherhood members are more devoted to their Islamist beliefs than they are to Egypt, he argued. "The idea that gathers them together is not nationalism, it's not patriotism, it is not a sense of a country."

He explained that he had opposed the idea of an Islamist standing in last year's presidential election, and had warned Mr. Morsi that the nation was becoming polarized under his leadership.

Consequently, Gen. Sissi had Mr. Morsi detained on July 3, and declared his administration at an end.

Following extensive protests against this move by supporters of the Muslim Brotherhood, Gen. Sissi took the extraordinary step of calling for help from the people.

"All honourable Egyptians must take to the street to give me a mandate and command to end terrorism and violence," the general said as he addressed a military graduation ceremony near Alexandria.

And the people responded. Tamarod, the popular youthful movement that spearheaded the mass anti-Morsi rallies that led up to the July 3 ouster, called on citizens to rally across Egypt "to support the military in its upcoming war on terrorism."

For these people, it was all about countering Islamism and upholding what appointed Prime Minister Hazem el-Beblawi refers to as "the civilian state."

But for many others, their opposition to the Morsi regime was about his authoritarianism.

"Morsi's difficulties didn't come from his Islamic policies – there were very few of those," said Bessma Momani, professor of political science at the University of Waterloo and fellow of the Balsillie School of International Affairs. "They stemmed from his style of governing."

He justified his sense of "absolute power" with his "winner-takes-all interpretation of democracy," she said.

"You can't just stand there and shout, the way he did – that's what Erdogan does, too – that doesn't inspire or frighten the people anymore."

It is a sign of the times that people don't accept this anymore, Prof. Fishere said. "I think Egyptian and many Arab societies have profoundly changed over the last 20 years. There is more individualism, different expectations and a different attitude towards authority. The old passive, submissive and hierarchical Egyptian is giving way to an assertive pragmatic egalitarian one.

"This new culture cannot accept authoritarianism even – especially – in the name of religion."

Prof. Fishere concludes that "political Islam is receding – it won't disappear but its moment has been eclipsed."

Even staunch Islamists – supporters of militant groups such as Islamic Jihad and Gamaa Islamiya – believe Mr. Morsi was far too authoritarian.

"He surrounded himself with Muslim Brotherhood people and their heavy-handed approach is making the Islamic project much less popular," said Montasser el-Zayyat, a lawyer for several Islamist organizations.

Mr. Morsi should have been "the Nelson Mandela of Egypt, bringing people together," said Najeh Ibrahim, a physician and a founder of the radical Gamaa Islamiya movement.

Islamists aren't the only group that fall victim to this trap of authoritarianism, said James Traub, a fellow of the Center on International Cooperation of New York University.

"This is also a disease of young democracies, where the stakes are so high that both ruler and opposition often see compromise as a betrayal of the national interest," he wrote in a recent online column for Foreign Policy magazine .

"This was true even in the first decades of the American republic," he said. "The concept of legitimate difference of opinion was very slow to take hold."

In Turkey, Mr. Erdogan just doesn't get it, Mr. Traub said. "'Every four years we hold elections and this nation makes it choice,' Erdogan lectured his people. Wrong. Electoral authoritarianism won't work the way it used to because too many people won't accept that transaction."

While Mr. Erdogan and Mr. Morsi demonized those who protested against their policies, Brazilian President Dilma Rousseff, facing similar, large-scale protests, praised the demonstrators "for waking the country to its shortcomings," Mr. Traub pointed out.

It is all a question of political maturity and a consensual approach rather than a majoritarian one.

That's more like the style with Gen. Sissi, Prof. Momani said. "He is soft-spoken, chooses his words carefully, and the people love him."

"It's almost sickening to see the outpouring of love for him. Women have signs saying they will marry him; they paint hearts on his pictures. It's a lovefest.

"Already we're seeing 'Sisi for president' posters," she said. "Egypt is heading toward another police state, and it will have popular support behind it."

But don't count the Brotherhood out, Prof. Momani insists.

"If the Brotherhood gets rid of its old-style leaders it could still be very popular," she said. "Their brand of Islam is not vilified…its newer leaders have shown it can draw the support of youths, women, liberals."

Four reasons why so many people have turned against political Islam

Many Turks and Egyptians, as well as Tunisians and Syrians, jealously guard the secularism ushered in by the likes of Mustafa Kemal Ataturk in Turkey and the secular political movements of the 20th century in the Arab states.

In Egypt and Syria, Christians in particular fear the consequences of an Islamic regime.

A wide range of people in all these countries object to the heavy-handed nature of the Islamist regimes.

In Turkey, protesters include secular liberals as well as many moderate Muslims who supported Recep Tayyip Erdogan, the current prime minister, but are disappointed by his efforts to silence opposition.

In Egypt, liberals as well as moderate supporters of the Muslim Brotherhood objected to president Mohamed Morsi's thuggish behaviour. Even Salafists thought he was giving the Islamic project a bad name.

In Tunisia and Libya, people recoiled at the assassinations of leading secular politicians, believed to have been carried out by agents of Islamist parties.

Many leftists, and even Salafists, in all these countries object to the U.S. support given to the Muslim Brotherhood in the Arab countries and to the ruling Justice and Development Party in Turkey.

Supporters of the military-backed old guard in both Egypt and Turkey side with the protests against the Islamist-oriented parties in power; so too do many Christians in Egypt who see the military as the best means of protecting their community from sectarian attacks.

As well, Saudi Arabia, Kuwait and the United Arab Emirates are strong backers of the military in Egypt, believing it is the best way to keep the Brotherhood at bay and to ensure support for these countries' anti-Iran policies.

Can political Islam be trusted to remain democratic?
July 6, 2013 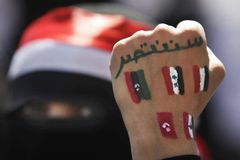