Calling Syria's civil war "the most dangerous crisis for global peace and security since World War II," António Guterres, the UN High Commissioner for Refugees, has appealed to the international community to contribute $6.5-billion (U.S.) in emergency relief to those Syrians displaced from their homes.

It is the largest amount ever requested for a single humanitarian emergency.

More than 126,000 people have lost their lives in the 21/2-year conflict, while more than 2.3 million people have fled Syria, arriving in makeshift camps in Lebanon, Jordan, Turkey, Iraq and even Egypt.

It is already one of the biggest exoduses in modern times, and the United Nations says the number of refugees will grow by a further 1.8 million in the next year.

All of the host countries are hard-pressed to manage the scale of this inundation on their own. To cope with this influx of people, the United Nations needs some $4.2-billion of the money requested to provide basic shelter, security, food, health care and education.

In Jordan, for example, the Zaatari refugee camp in the north of the country houses more than 100,000 people, making it Jordan's fifth-largest city – one that was never planned. Refugees in Egypt, many of them facing deportation back to Syria, have taken to high-risk attempts to sail in unstable boats to Europe. The welcome the refugees were given last year by the country's Islamist government has been rescinded by the military-backed authorities in power since July.

The other $2.3-billion the UN has requested is for the more than four million Syrians displaced from their homes inside the war-ravaged country.

Officials with the World Food Programme, a UN agency, say they aim to supply foodstuffs to these people once every month, meaning they have to get food to more than 130,000 different people every day. It's a daunting task when you consider the difficulty of traversing a war-torn country with several different armed groups controlling various districts, many demanding "taxes" from the convoys carrying the food or even hijacking whole vehicles – not to mention the danger of being caught in the middle of a firefight.

"This is the worst humanitarian crisis that we have seen in decades, with every day more vulnerable Syrians pushed into hunger," said Muhannad Hadi, the World Food Programme's emergency co-ordinator for Syria. Almost half the country's population of 23 million "is food insecure," said Mr. Hadi, while nearly a third "need urgent, life-saving food assistance."

Among the troubles plaguing the displaced people inside Syria is the lack of infrastructure to support the clusters of people, especially in the chilling winter they now face; the steady reduction of electricity being made available; the lack of drinking water in many areas; the high price of basic foodstuffs such as bread; and the lack of any income to pay for things.

The International Rescue Committee, an NGO, says the price of bread in Syria has soared by 500 per cent since March, 2011, when the conflict began, while the cost of a blanket, at $27, is prohibitively high, amounting to "93 per cent of the average monthly income."

There are reports that some Islamist groups have been distributing bread to communities that show their support.

Mr. Hadi said that's one of the reasons why aid from UN agencies is so important: It is given with complete neutrality – "the only criteria is need." 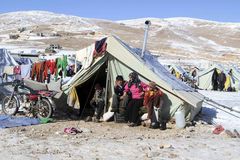