In a random alignment of the democratic planets, Canada and the United States will hold their first formal debates of this election cycle on Thursday evening.

Which will be more interesting? More informative? Answers to those questions won't be available until after 9 p.m. ET, when the Republican primary debate begins an hour into the Canadian leaders' showdown.

But here's one category in which the U.S. one will be almost impossible to beat: metaphors.

American politicos have been scouring their mental image-banks to produce analogies that suitably capture the impending phenomenon of a debate with Donald Trump.

Rattlesnake with a toothache. Drunken race-car driver. Bar-room brawl. The last few days have been replete with imagery for the contest where Trump will be at centre stage.

He'll hold a prime spot in the Fox News debate because he's leading the pack in early polls, which most serious pundits insist are meaningless despite some showing him with nearly double the support of his closest rival.

The reality-star-real-estate-billionaire has already proven that he's mastered a basic lesson of politics: keep expectations low before you hit the stage.

How will he do in the first major debate of his life? Maybe well, he said, or maybe terribly. When asked about the debates, he told a news conference that he's got less experience than anyone on stage.

"These guys debate every night of their life. That's all they do, is debate," Trump said.

"I've never debated before. I'm not a debater."

To employ a more standard pugilistic metaphor for these events, will Trump keep it clean, or will he hit below the belt? In the last couple of weeks he's made fun of John McCain for having been a PoW, publicly released a rival candidate's cellphone number and called a former Texas governor stupid.

He suggested Rick Perry should have to take an IQ test before being allowed on stage.

One thing Trump's targets have in common is that they've attacked him first.

In his books, Trump frequently touts the value of revenge. He stressed in a weekend interview that he rarely strikes first – but he strikes back hard.

"I've always counter-punched," he told NBC's "Meet The Press." "You have to counter-punch. But I'm not looking to start anything, that's for sure. I'd rather discuss the issues."

Which raises the question of how the other candidates should deal with a loose cannon.

An aide to Ohio Gov. John Kasich compared it to preparing for a NASCAR race with a drunk driver on track. An aide to Sen. Marco Rubio used the cranky-rattlesnake analogy.

Former candidate Newt Gingrich had another suggestion. He said candidates who don't make the top 10 cut to be on stage might be better off in the B-list debate (at 5 p.m.) where they can quietly and calmly lay out their ideas.

"It may be that ... 9 o'clock becomes the Trump-versus-everybody brawl," he told Fox News.

"And in some ways you might be happier not to be in the middle of a bar-room, when the brawl's going on."

Trump was also getting advice from a pillar of the Republican elite establishment. Strategist Karl Rove said he'd done a good job downplaying expectations and should use his energy to attack issues – not people.

Even one of the debate moderators has weighed in with speculation about what approach Trump might take – statesman, or showman?

"Some are saying, 'Be the statesman ... Show that you're not a reality-show clown, show that you are up seriously to being president,"' Fox News host Chris Wallace said Sunday.

"And there are other people saying, 'Hey, this got you to 20 per cent, keep doing it!"' 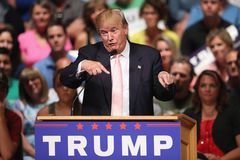