Lebanon's newest political crisis began during a routine lunch in Beirut on Nov. 3, when prime minister Saad Hariri was playing host to a visiting French dignitary. Partway through the meal he received a phone call. He vanished shortly thereafter, only to resurface hours later in Riyadh, the Saudi capital. He had apparently told no one he was leaving the country.

The next day, the crisis deepened when, to the utter bafflement of the Lebanese people and every member of parliament, their popular prime minister – the Sunni Muslim leader of a year-old unity government – used a Saudi TV appearance to announce his resignation. The Lebanese assumed the Saudis had forced him to quit. Lebanon suffered a collective anxiety attack. Prime ministers normally don't resign on foreign soil.

Was cursed Lebanon, a small Muslim-Christian country that was already in the middle of a power struggle between Iran and Saudi Arabia, once again marked for tragedy – one that could envelop the entire Middle East?

"Any war in Lebanon would not be limited to Lebanon, for sure," said Kamel Wazne, a political and economics analyst in Beirut. "It would have the potential to explode into a regional war."

Lebanon has routinely been a flashpoint for Middle East violence – civil and regional wars, assassinations, terror attacks, foreign occupations. With Mr. Hariri's resignation, the omens did not look good, all the more so since the new Saudi Crown Prince, Mohammed bin Salman, was accusing Hezbollah, the Shia Islamist political party and militant group based in Lebanon, and its Iranian sponsors of stoking the war in Yemen on Saudi Arabia's southern flank.

Three weeks after Mr. Hariri's mysterious disappearance, one that has yet to be adequately explained by the Saudis or by him – he cited a fear of assassination and "unacceptable interference" by Hezbollah in Lebanese politics for his exodus – Lebanon has cooled down. An extraordinary international and domestic lobbying effort that included interventions by French President Emmanuel Macron, a supportive message from U.S. President Donald Trump and, probably, a flurry of back-channel diplomacy from several other countries seemed to do the trick. Lebanon had its leader back.

On Wednesday, a day after his return, Mr. Hariri revealed his intention to "postpone" his resignation. Many Lebanese assume he will stay put and resume his role as peacemaker in the often-fractious parliament, where Shia and Sunni Muslims, Christians and Druze manoeuvre for power while arch-rivals Iran and Saudi Arabia keep a watchful eye on who's up and who's down.

Not only has the crisis in Lebanon been defused – at least temporarily – the rest of the Middle East is undergoing a realignment, one that holds the potential to promote a rare bout of regional stability but could very well do the opposite as Iran and Saudi Arabia play their geopolitical zero-sum game, where one country's gain is considered the other country's loss. If the Middle East were to erupt in a shooting war for regional power, Lebanon would no doubt be caught in the middle. It could even be at the centre of the eruption, as it was in 2006, when Israel invaded southern Lebanon in an ultimately failed effort to rid it of Hezbollah.

The wild card is Saudi Arabia's Crown Prince Mohammed, the young, impetuous, inexperienced – yet all-powerful – heir to the throne, and there is no doubt he is in a bad mood.

Militias backed by Saudi Arabia in Syria have been fighting a losing battle against Syrian President Bashar al-Assad, whose campaigns against the rebels and the Islamic State are supported by Russia, Iran and its Lebanese proxy, Hezbollah. Hezbollah has claimed it was instrumental in the Islamic State's retreat from Syria and played a role in its near defeat in Iraq.

The Saudis' war against the Houthis, the Shia rebels in Yemen that Saudi Arabia assumes are fully supported by Hezbollah and Iran (Saudi Arabia does not really distinguish between the two), was supposed to result in a quick, clean victory for the kingdom and its formidable air force. Instead, the war has dragged on for more than two years, turning into the world's ugliest humanitarian crisis. Meanwhile, the Saudi blockade of Qatar, the Gulf state the Saudis consider overly friendly to Iran, has neither crippled the Qatari economy nor forced it to bend to Saudi Arabia's demands, which include shutting the Al Jazeera news channel. If anything, the blockade has pushed Qatar closer to Iran.

So far, it looks like Prince Mohammed is zero for three in the Middle East geopolitical arena – Syria, Yemen and Qatar are all going against him. Of the three, Syria and Yemen are the biggies. At least no one is firing bullets inside Qatar or at it.

What would make Prince Mohammed happy? Putting aside a successful outcome for his massive economic fix-it job inside Saudi Arabia – where low oil prices have punched gaping holes in the national budget – he has made it abundantly clear that he wants Hezbollah to end its foreign adventures. Mr. Hariri, as leader of the pro-Saudi Future Movement party, supports the Prince's demands.

The question is whether Hezbollah will comply. If it does, even partly, tensions would drop in the Middle East and Lebanon might be spared upheaval. It is widely believed in Lebanon that Mr. Hariri was, in effect, detained by the Saudis because they believed his unity coalition government had provided too much cover for Hezbollah, which directly or indirectly controls 17 of the government's 30 cabinet seats.

There are tentative signs that Hezbollah, led by Hassan Nasrallah, is willing to negotiate. "Hezbollah is more relaxed about negotiating with Hariri about suspending or withdrawing military operations outside the country," Mr. Wazne said.

Maybe that's because Hezbollah has been on the winning side of the battles against the Islamic State in Syria and Iraq. In a televised address Monday, the day before Mr. Hariri returned to Lebanon after an absence of almost three weeks, Mr. Nasrallah said he was willing to pull his forces from Iraq, after the Islamic State lost control of its last urban stronghold in the country. "We consider that the mission has been accomplished, but we are waiting for the final, Iraqi announcement of victory," he said.

While he didn't say he would do the same in Syria – the Syrian war is hardly finished – he strongly denied in the same TV appearance that Hezbollah had delivered weapons to the Houthi rebels in Yemen or that Hezbollah was behind the firing of a ballistic missile earlier this month from Yemen toward Riyadh (the missile was shot down by the Saudi air defence). At the same time, Hezbollah's support for Mr. Hariri, his unity government and Lebanese stability suggests it is not bucking for a war with anyone, even its nemesis Israel.

The big question is whether Prince Mohammed believes Hezbollah is not sending military support to the Houthis in Yemen and will actually withdraw its forces from Iraq and, later, Syria. If he doesn't, the Prince's already aggressive foreign policy might become more aggressive. Note that the kingdom has been courting Mr. Trump, whose first foreign visit as President was made to Saudi Arabia, and is reportedly courting Israel in its anti-Iran and anti-Hezbollah campaign. Earlier this month, an Israeli cabinet minister said Israel had had covert meetings with Saudi Arabia, which has no official diplomatic relations with Israel.

While Hezbollah has created a formidable fighting machine that Iran has vowed to never disarm as long as the Israeli "enemy" exists, its ability to win a war against the combined military might of Saudi Arabia, Israel and the United States is low to non-existent.

To preserve his job and prevent Lebanon from being drawn into a potentially ruinous crisis, Mr. Hariri, in effect, has to act as Prince Mohammed's anti-Hezbollah agent. He has no choice but to push Hezbollah to wind down its foreign missions.

If Hezbollah's claim that it is not backing the Houthi rebels proves credible, and Hezbollah fighters do return from Iraq and Syria, Lebanon and the wider Middle East might have a fair chance of avoiding war. If Prince Mohammed gets no compromise from Hezbollah, all bets are off. The calming of nerves in Lebanon since the return of Mr. Hariri from Saudi Arabia is an encouraging sign. But in the Middle East, such signs often prove fleeting. 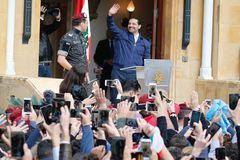 Saad al-Hariri returns to Lebanon for first time since resigning as prime minister
November 21, 2017
Saudi Crown Prince calls Iran’s Supreme Leader ‘the new Hitler’
November 24, 2017
Follow Eric Reguly on Twitter @ereguly
Report an error Editorial code of conduct
Due to technical reasons, we have temporarily removed commenting from our articles. We hope to have this fixed soon. Thank you for your patience. If you are looking to give feedback on our new site, please send it along to feedback@globeandmail.com. If you want to write a letter to the editor, please forward to letters@globeandmail.com.
Comments