On an unusually warm and sunny Sunday, three days after the attacks that killed 129 people, Parisians were on the streets and defiant. France will not change, they insisted; our liberties and unconstrained lifestyles are too strong to be defeated.

To reinforce the point, they plastered the base of the monument in Place de la République, topped with a statue of Marianne, the national icon of freedom and democracy, with signs that read "Not afraid" and "We will remain standing."

Libération, the Paris newspaper co-founded by Jean-Paul Sartre, urged gallantry. "To turn our back on our values is to begin to flee before the terrorists," its Sunday editorial said.

But the horrific Friday night slaughters, the bloodiest act of terrorism on French soil since the Second World War, will inevitably change France. They have changed it already.

Small but telling examples of the changes could be seen everywhere on Saturday and Sunday.

The popular open-air food market in Place de Bitche, in Paris's tourist-free 19th arrondissement, did not open on Sunday for the first time in living memory. Soldiers and policemen, armed with rifles and wearing body armour, were common sights in the city centre streets. According to some Parisians, the vast subway network seemed emptier than usual on the weekend. "For the first time, I thought twice about getting on the metro," Stéphane Faure, a 25-year-old Parisian and trainee journalist, said in République, where he was among the mourners.

There was no panic among Parisians, in spite of a big scare shortly after dusk on Sunday that sent hundreds of Parisians charging out of République as police drew their guns – it was a false alarm triggered by fireworks. But unease and apprehension, even fear, certainly set in after the Friday attacks, for which Islamic State took responsibility. (It didn't help that a manhunt was underway on Sunday for a suspect, identified by police as Abdeslam Salah, in the Friday attacks.)

That's because the attacks – six in total across Paris – were unlike the January assault on the offices of the French satirical magazine Charlie Hebdo. "Hebdo was a targeted attack against a single publication and its means of expression," said Matthieu Da Rocha, 25, who works in digital marketing. "But this new attack was against everybody and anybody, against young Parisians … What makes us crazy about what happened is that these sort of attacks can't be prevented."

The question is whether the fear triggered by the attacks – the sense that Parisians could be vulnerable to harm even while drinking wine in a sidewalk bar – will be enough to change the French way of life and French politics. If yes, how?

Some Parisians think nothing much will change, because Europeans are used to sporadic terror attacks. In the 1970s, for instance, Italy suffered a string of them at the hands of the Red Brigades, a paramilitary group that sought to destabilize the country. Their most infamous exploit was the kidnapping and murder of Aldo Moro, who had been Italy's prime minister.

In France, Algeria's Groupe Islamique Armé launched terror attacks in the mid-1990s. A train bombing in Madrid in 2004 killed 191 people; a terrorist cell linked to al-Qaeda took the blame. A year later, Islamist suicide attacks killed 52 people in London's subway and on a bus.

"We've been through terror attacks before," said Charlie Kehoe, an entrepreneur who runs a children's products distribution business and has lived in Paris for 30 years. "I don't see [the Friday] attacks having a lasting effect. The French are natural-born rebels, we cherish our individual freedoms and we won't let terrorists deny them to us. We will rally together."

Others aren't so sure. While some say that the attacks may not deliver big changes to the way Parisians live their everyday lives, they think the fear factor is bound to keep the city on edge, as the République stampede on Sunday showed; before Friday's carnage, the sound of fireworks would have been ignored. "What will change is that, in our heads, we will live with the knowledge that we have enemies and that is a new thing," said Alain Auffray, a political writer at Libération.

Shortly after the attacks, French President François Hollande succeeded in ramping up the fear factor by declaring a national state of emergency and vowing to unleash the dogs of war. "France, because it was shamefully and violently attacked in a cowardly manner, will be unforgiving with the barbarians," he said.

While changes in social or street behaviour are difficult to predict, political changes could come fairly quickly, all the more so since Mr. Hollande has unleashed his war cry. After January's Charlie Hebdo attacks, his government passed legislation that increases the power of the police, the judiciary and the intelligence services. Friday's attacks could see those powers boosted, to the point that France, in effect, would have its own version of the U.S. Patriot Act.

Tightened surveillance powers could be endorsed by Marine Le Pen, leader of the far-right, anti-immigrant and anti-European Front National even if they come at the costs of the French people's cherished individual freedoms. "France and the French are no longer safe," she said on Saturday. "It is essential that France recover the control of its national borders once and for all. Without borders, neither security nor protection is possible."

The refugee crisis, combined with the fear of new jihadi attacks, could boost Ms. Le Pen's popularity to the point she becomes a serious contender in the 2017 presidential elections. Even before the Friday attacks, she was topping the polls.

"Four years ago, it was considered a shame to vote for the Front National," Mr. Da Rocha said. "Now they are proud of it. The attacks could boost Marine Le Pen and she could become president. So when you ask if France could change because of the attacks, it sure would if she gets elected." 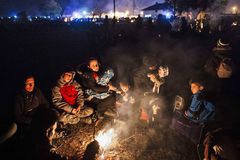 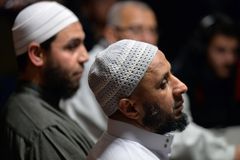 Canadians from coast to coast gather to honour and mourn Paris victims
March 22, 2018 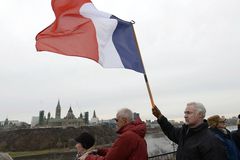