While many Canadians grapple with freezing cold temperatures, British politicians are trying to figure out why their country can't seem to cope with winter.

Although hardly severe by Canadian standards, this winter has already caused havoc for trains, planes and automobiles across Britain. The country was hit by seven major storms last month, with winds reaching more than 200 kilometres an hour at times, making it the stormiest December since 1969. It was also the wettest month in Scotland in more than a century. All of this has led to hundreds of cancelled flights, disruptions to rail services, dozens of road closings and the evacuation of thousands of homes due to flooding.

At one point on Christmas Eve, the north terminal at London's Gatwick Airport, the country's second busiest, shut down after the nearby River Mole burst its banks, leaving thousands of passengers without heat, food or water. Police had to be called in to deal with crowds of unhappy people. It was the second time in three months that part of the airport had been flooded, and a flood advisory is still in place.

Things have gotten bad enough that a parliamentary committee has launched an inquiry into the country's "winter resilience," examining everything from airport contingency plans to how to encourage Britons to shovel their sidewalks.

In a report released this week, the House of Commons Transport Committee said that while some improvements have been made since 2010, when a series of storms grounded thousands of flights, "further concerns have been raised about the poor resilience of transport."

The report noted that Heathrow Airport, which has Canadian Normand Boivin as chief operating officer, cancelled hundreds of flights over a four-day period last January because of snow. It also raised concerns about how roads are salted and it said people are afraid to clear their sidewalks for fear of being sued if someone falls. Among its recommendations was a call for a national advertising campaign each winter "highlighting that the public can clear snow and ice from outside their homes without fear of legal action and should consider doing so."

On Tuesday, the committee grilled executives from Gatwick, airline carrier EasyJet and the rail network about their many problems this winter.

Gatwick's chief executive Stewart Wingate explained that experts had told the airport in 2009 that the chances of the north terminal flooding was once in 1,000 years. As a result the airport spent next to nothing on flood defences for the terminal.

During the night of Dec. 23, the area received so much rainfall, the river quickly overflowed its banks. Instead of closing the terminal and cancelling flights, Mr. Wingate said the airport decided to move passengers to the south terminal which was still operational. But that fell apart when the airport failed to order enough buses and more than 60 flights had to be cancelled.

"I'm very sorry for what happened," Mr. Wingate told the committee. "At the end of the day we did fall short."

Peter Duffy, an executive with EasyJet, which had the most cancelled flights, blamed Gatwick for the problems, telling the committee that the airport's contingency plans didn't work. Mr. Wingate shot back that other airlines had praised the airport for its efforts.

For Gatwick and Heathrow, which are both privately owned, the parliamentary review comes at a tricky time. The government is considering adding another runway to one airport, prompting a fierce competition between the two.

On Tuesday, Mr. Wingate acknowledged that Gatwick's reputation had taken a hit because of the flood. "We will now redouble our efforts to deliver better service to our passengers going forward and to put in even more resilience than we already have," he said. 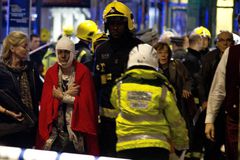