Never has a single state election been said to represent so much for the prospects of a sitting President, his Republican challenger or the future of American organized labour.

Of the three, the beleaguered U.S. labour movement had the most at stake in seeking to oust Wisconsin GOP Governor Scott Walker in a special recall election held Tuesday.

Mr. Walker's survival – with most ballots counted, the governor had a 15 percentage point lead over his Democratic rival – suggests bleaker days ahead for U.S. public sector unions.

Whether the same can be said for President Barack Obama, who must face voters in November, is a question that will consume the punditocracy for days.

But one conclusion can already be drawn: the electorate, in Wisconsin and beyond, is divided like never before. And this presidential campaign will do nothing to unite it.

Mr. Walker, who gutted the collective-bargaining rights of Wisconsin's public-sector unions, set off a national debate about the utility of organized labour.

Over the past year, Wisconsinites divided into two camps: those who see public unions as critical to ensuring a stable middle-class and those like Mr. Walker who see them as the source of ballooning government debts and higher taxes.

The wrenching recall campaign put Wisconsinites through the wringer. A Marquette University poll released last week found that 34 per cent of voters had stopped talking to someone around them because of the bitterness of the election.

The recall vote posed a dilemma for Mr. Obama. He needs the U.S. labour movement to provide the bulk of volunteers who typically staff Democratic election campaigns. But he could not afford to alienate swing voters in Wisconsin who sided with Mr. Walker.

"To a degree, you have to pick your battles. And national Democratic elites were never particularly keen on this battle," said Marquette political science professor John McAdams, noting that the recall vote drained resources in a presidential election year.

In the end, the President chose to stay silent during the Wisconsin campaign, save for a Monday tweet in which he expressed support for Mr. Walker's Democratic rival, Tom Barrett. For many in his party and the union movement, it was too little, too late.

If the Wisconsin vote carries any lessons for Mr. Obama, it is that waging an election campaign based on class warfare can be a risky strategy for a Democrat. That is a sobering sign for a President whose re-election strategy has been largely based on depicting Republicans as hostile to the economic interests of the 99 per cent.

If the Wisconsin vote does not debunk the wisdom of Mr. Obama's class-warfare strategy, a Pew Research Center study released Tuesday might. Despite growing income inequality, the American Dream remains an attainable reality in the minds of U.S. voters.

"There are no indications of increasing hostility toward the rich and successful," according to Pew's 2012 American Values Survey. "And there are no signs that lower-income people have become more cynical about an individual's power to control their destiny or the value of hard work."

Union membership in the private sector has already fallen to single digits. The 37 per cent of public-sector workers who belong to unions is all "Big" Labour has left.

But since Mr. Walker signed the collective-bargaining bill, which was passed last year by Wisconsin's Republican-controlled legislature amid weeks of protests around the state capitol, membership in the state's public-sector unions has withered.

That is because the law ended the automatic deduction of union dues. Public workers must now choose to opt in to the union, rather than being included by virtue of their job.

The result is that the main union that represents state and municipal workers in Wisconsin saw its membership fall by more than half to about 29,000 from 63,000 in the past year. The Wisconsin wing of the American Federation of Teachers lost a third of its members.

"The prosperity of organized labour in this country has largely been based on the fact that union membership was compulsory," Prof. McAdams said. "America has an individualistic political culture that often leads people to say they don't need a union."

The question now facing organized labour and a Democratic Party that relies disproportionately on it for money and volunteers is this: Will the rest of the nation go the way of Wisconsin?

Wisconsin's labour battle may have nation-wide repercussions
May 25, 2012 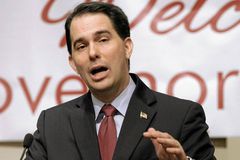