Joseph Stalin, eat your heart out.

But what Stalin never had was an applause app, nor the ability to bathe in the warmth of a billion claps pouring in over the space of a day.

That pleasure belongs to Xi Jinping, the Chinese leader whose 203-minute speech Wednesday at a major political congress was quickly distilled into an 18-second snippet and inserted into a web app that exploded in popularity. Viewers who open the app watch the video before being transported to a picture of the Great Hall of the People, over which are superimposed a set of hands.

Read also: China's Xi sells his vision of new socialism to the world

China's Xi Jinping made the country his own, and he's just getting started

A tap of the screen produces a clap, with a meter on-screen showing progress as users furiously peck out applause.

It's called "Clap for Xi Jinping," and it has succeeded in unleashing a torrent of virtual acclaim for a leader who has become the object of a new cult of personality in China through savvy use of new media by a generation of digitally-literate propagandists.

"For Chairman Xi, I will clap like a crazy person. Our Chairman Xi Jinping is the most handsome guy in the world," wrote one person on China's Twitter-like Weibo service.

"I will keep clapping for Xi Dada" – Uncle Xi – "until my arms start to ache," wrote another. Using the app "to clap for Dada makes me feel as if my soul has sublimated," added another.

No longer does Chinese propaganda rely solely on turgid prose and recycled abstractions.

Under Mr. Xi, dramatic documentaries, light-hearted cartoons, and even doctrinaire rap tunes have all been employed to enhance the party's appeal and humanize Mr. Xi as a tough but approachable luminary leading the country back to greatness.

But Mr. Xi's accumulation of power has also created new demands to venerate his accomplishments – and social media has become a public square for expressions of fealty. As the Chinese President spoke on Wednesday, numerous pictures circulated of people obediently watching the televised feed, including kindergarten students, monks, hospital patients and even prisoners.

The clap app created a new avenue to express praise. It opens with Mr. Xi saying, "The primary goal of the Communist Party of China is to seek happiness for our people and to achieve the great rejuvenation of the Chinese nation."

"It is really revolutionary in the sense that it induces people to participate in an act of adulation. The individual becomes a part of propaganda – and even, potentially, enjoys the experience," said David Bandurski, who is-co-director of the University of Hong Kong's China Media Project.

"There will not be, I suspect, an alternative app that allows people to throw fruit at the president."

When The Globe and Mail tried its hand Thursday afternoon, the app reported that 1,024,294,610 claps had already been directed toward Mr. Xi. That equated to more than 10,000 per second since the close of his speech.

The app claimed to offer 18 seconds to clap for Mr. Xi. Whether by accident or intent, the clapping window actually lasted for three minutes and 41 seconds, long enough for this reporter to add 1,990 claps to the national tally – which beat out 99 per cent of other users, the app said.

"Clap for Xi Jinping" was created by the news division of online media giant Tencent, which declined comment.

Tencent is not a state-owned firm. But making the clap app offered another window into the ways the Communist Party has broadened its influence. A recent report said the Tencent payroll now includes more than 7,000 party members.

In Chinese media, it has become "really hard to distinguish a commercial entity from a party organ," said King-wa Fu, a professor of journalism at The University of Hong Kong.

Beneath the wild success of the clap app, however, flowed a current of subversion. Engineer Yang Kaiwen, 28, played twice, each time clapping exactly 404 times.

It was a reference to "404 Not Found, a term that symbolizes China's Internet censorship," Mr. Yang said in an interview.

He called the clap app "awful and way too tacky." It "looks like a kind of entertainment propaganda," he said. "It's just a tool of the cult of Xi," who, he worries, "might become a Mao-like leader."

"The way Chinese media are expressing their loyalty to the central government is quite embarrassing," another person wrote on Weibo.

But they are doing so in increasingly creative ways.

To a catchy tune that ends with the triumphant strains of Beethoven's Ninth Symphony, singers belt out a chorus: "Prosperity is the goal, reform is the drive, rule of law is the guarantee, party building is the key!"

Mr. Xi has called for more such innovations, saying on Wednesday that priority will be given to "improving means of communication and to creating new ones," even as he warned that "erroneous" ideology must not be tolerated.

In that atmosphere, the huge numbers of people digitally clapping for their leader brought to mind the demands of Communist dictators from another era.

In the 1973 book The Gulag Archipelago, author Aleksandr Solzhenitsyn famously describes an 11-minute outburst of applause for Stalin at a political rally. At eight minutes: "They couldn't stop now till they collapsed with heart attacks!" They continued "till they fell where they stood, till they were carried out of the hall on stretchers." Only when a factory manager stopped did everyone else lower their hands.

Hours later, the manager was dispatched to jail for 10 years.

"When you see the underlings of a leader enthusiastically applaud, then you should feel fear," said Frank Dikötter, a historian who has examined in detail China under Mao.

"Because that's precisely what they feel."

He sees "Clap for Xi Jinping" as little different.

"The technology may be new, but the mechanism behind it is very much the same," he said.

"The cult of personality quite literally reduces those around the leader to sycophants who must at all times show their fervent support of the man in charge."

China’s Xi sells his vision of new socialism to the world
October 18, 2017 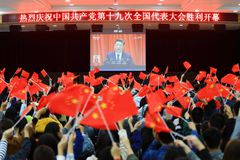 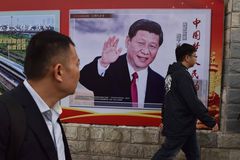