Feng Yanming may soon have to get a new bed. For much of the past four years, his wife has lived outside Beijing with their two children, the second a son born illegally under China's one-child policy. They left for the countryside to escape regular visits from hostile family-planning officials.

But this week, when they talked on the phone, his wife "asked me to hurry up and buy a bed, so they could move back to Beijing," Mr. Feng said. The couple had just read a brief announcement from China's security authorities, which in a major departure from past policies said they would seek to register all people without documents.

Many of them are "ghosts" like Mr. Feng's son, who was kept from the privileges of Chinese citizenship by being an unregistered second-born child. A 2010 census estimated some 13 million people in China have not been properly registered.

Now the Ministry of Public Security says it wants to give the ghosts proper documents and "lay a sound foundation to further push forward modernization of governance," according to the Nanfang Daily.

The promise of documents comes as cities and provinces across China begin to quietly undo some of the bureaucratic pain caused by the invasive reach of the decades-old one-child policy.

When Chinese leadership said in October it would eliminate the policy, it promised new freedom to many couples. But it initially gave no hope to the parents of children born in contravention of the long-standing rule.

Parents in China have long been able to legally register second and third children if they paid fines, which varied by region but were often set at years' worth of income. Those unable or unwilling to pay the fines were routinely barred from adding their children to their hukou, the Chinese household registry that is the foundation for civic life.

Without hukou registration, their children became non-persons in the eyes of the Chinese state, some unable to access vaccines, obtain health care or secure legal employment.

Chinese laws that date to 1988 require registration of all children regardless of other issues, but that requirement has routinely been flouted by Chinese authorities who demanded parents first pay fines for additional children.

The Ministry of Public Security offered no details on when it might begin its registration campaign, and it's unclear whether China is considering any sort of amnesty.

But the shift comes only weeks after China promised to strike its one-child policy. The National Health and Family Planning Commission has estimated a new crop of births will boost China's gross domestic product by 0.5 per cent in coming years, although demographers doubt a country now built around single children will be inundated with babies.

Yet Chinese policies are already being rewritten. Local media have documented misuse of ghost-child fines, such as in Jiangxi province where family-planning officials gave public security bureaus money to block registrations unless parents paid – and those revelations have created momentum for change. Some rural regions have already stopped requiring parents to pay fines before registering additional children.

China has made great change from the days when authorities would barge into homes, "take all the furniture, all the TVs and all the refrigerators and sell them to pay off the fine," said Scott Rozelle, the co-director of the Rural Education Action Program at Stanford University who has worked alongside family-planning authorities in rural China. "That was made illegal in the Wen Jiabao era," he said referring to China's premier from 2003 to 2013.

Fear has still kept some families from attempting to register undocumented kids. "They are worried once they register the child, a bill will follow," said Chen Hongda, an activist who has long advocated on family-planning issues.

Authorities have remained unbending in some cases. Li Xue, born a second child to a poor Beijing family, has foregone proper schooling and experienced social exclusion without hukou registration. She has watched news reports linking unregistered Chinese people – who exist in the shadows of the system – to terrorism risks, an issue serious enough to prompt action. But for now, "no one has come to talk to me," she said. "I still don't feel like my issue is going to be resolved any time soon."

Now 22, she is preparing a letter to send to Public Security Minister Guo Kunsheng, asking "for his help to order my local police station to immediately stop violating my rights," she said.

Others are more hopeful. After Mr. Feng's wife got pregnant for a second time, he lost his job at a state research organization. Like others interviewed by The Globe and Mail in earlier reporting on the issue, he had previously asked that his first name be withheld for fear of reprisal.

He is now willing to be identified in full. The atmosphere has tangibly changed, he said. A few days ago, he joined a protest in Beijing calling for authorities to legally make his son a person. Instead of being hauled off by police and detained, he received only a phone call.

Police "were just afraid about people making trouble – but were not going to force us away," he said.

"Once those at the top make up their minds, things change so fast – sometimes we are surprised at how fast they change," he said. "I'm quite optimistic. I've started bed shopping." 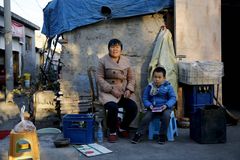 China's one-child policy by the numbers
October 29, 2015
Follow Nathan VanderKlippe on Twitter @nvanderklippe
Report an error Editorial code of conduct
Due to technical reasons, we have temporarily removed commenting from our articles. We hope to have this fixed soon. Thank you for your patience. If you are looking to give feedback on our new site, please send it along to feedback@globeandmail.com. If you want to write a letter to the editor, please forward to letters@globeandmail.com.
Comments