A young employee, lightly dusted in flour, pokes his head into Anna Hambly's office. "Someone is calling from Gurgaon and wants 50 fruitcakes – the 300 g size. What should I say?"

Ms. Hambly weighs the question, clearly torn – that's a nice, fat order for cake. But the staff in her Delhi bakery is already working flat out in the Christmas rush.

Trays of mincemeat tarts are stacked on every available surface. A station for decorating gingerbread people has been set up near the front office. And those fruitcakes, parcelled up in shiny red boxes tied with silvery ribbon, are stacked five deep on a table near the door, ready for delivery.

When Ms. Hambly and her husband David, bakers from Victoria, opened the Red Moon Bakery in India's capital four years ago, they did not expect Christmas to become such a critical part of the business – after all, only 2 per cent of India's population is Christian.

"Christmas doubles our volume," said Ms. Hambly. "Some of it is expats – but more and more if it is for Indians. They want gifts to give, and they want all those traditional Christmas-y things like mincemeat and gingerbread houses."

December 25 is in many ways the ultimate Indian holiday: It appeals across religious lines in a country where gift-giving, over-the-top decorating and eating sweets are three of the rare activities around which every ethnic and geographic group is united.

These days every Indian mall holds a Christmas festival and decorates with zeal. Upscale restaurants offer special Christmas menus. And a Christmas tree is a new status symbol.

"We're going to have a tree at home this year," said Renu Chopra, a Hindu college student who went shopping for baubles and tinsel at an upmarket Delhi shopping centre this past week. "I just think they're so pretty. It's not a religious thing – it's just that Christmas has a lot of things that are so cute."

When Garima Backliwal, a Delhi artist, launched a small business making quilled-paper greeting cards a few years ago, she began with simple motifs such as flowers and then added Diwali cards. Then she considered Christmas – and found she sold cards with evergreen trees and stars as fast as she could make them, most of them to Hindus.

"I'm not surprised," she says, "because even my own daughter, her favourite holiday is Christmas. She loves decorating the tree, all the trips to the market, all the shops that now keep a Christmas tree. Christmas has become an Indian festival."

In Christian-dominated states such as Kerala, Indians have local Christmas traditions. In the south, they put oil lamps symbolizing the light of Jesus on windowsills or roofs; Catholic homes in Maharashtra often feature a nativity scene. But in big cities such as Delhi, Mumbai and Bangalore, a growing population has travelled or lived outside the country. Schools in the north have holidays now, because public schools are unheated and the cold is sharp, so middle-class families often experience Christmas abroad and seek to recreate some of those traditions. Ms. Chopra, for example, decorated her first tree a few years ago when visiting friends in London.

"A lot of our Indian business is people who are dragged in here by their kids who have been abroad and had something and now they're excited that there is a place to get it in Delhi," said Ms. Hambly.

The Hamblys, who are evangelical Christians, have watched bemused as Christmas has become an ever-bigger deal over their eight years in India.

"Christmas for us is about the birth of Christ," said Mr. Hambly, as young assistants ebbed around him in the kitchen. "But from a business standpoint, having it become this big commercial thing is – well, it is good for business. The thing that I hope doesn't happen in India is that the West comes in and then they lose the good things about Indian culture."

And that order for 50 more fruitcakes? Ms. Hambly said she'd try to figure it out. Because everyone should have cake for Christmas. 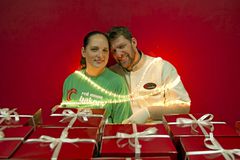 new
Canadian schools struggle with what to do about Christmas
December 16, 2011 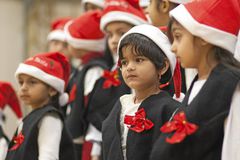