If you look past the half-empty planes landing at Cairo airport and the absence of tourists at the Pyramids, forget about the military coup that ousted president Mohammed Morsi from office and the brutal crackdown against his followers, and pretend there isn't a curfew against anyone being on the street past midnight, one has the sense that Egypt these days is a country trying very hard to look normal.

After almost two and a half years of on-again off-again protests in the capital's iconic Tahrir [Liberation] Square, traffic has returned in full force to the massive intersection. Indeed, traffic these days throughout the city is as congested as it has ever been.

People on the street tell you it's wonderful to have things the way they used to be, and they point with pride to today's newspaper headlines that emphasize the $4.9-billion (U.S.) aid package to be provided to Egypt by the United Arab Emirates (UAE), as well as the announcement by Finance Minister Ahmed Galal of $4.3-billion in investments to be made in roads, railways and sanitation facilities.

To be sure, there is an ongoing sense of unease that security threats may arise at any moment.

Early this morning three policemen were gunned down in the Nile Delta town of Mansoura, apparently part of a growing campaign by militant Islamists who oppose the military takeover. Though attacks such as this have mostly been in the unruly Sinai Peninsula in the country's northeast, they recently have taken place in towns along the Suez Canal and points further west.

The current interim government of appointed officials, however, appears to see the greater threat coming from public protests and the chaos that accompanies them. Last week the cabinet approved a law that establishes what kind of assemblies and demonstrations can be held in the country. While the government presents the law as recognition of the right to protest, the law would give the interior ministry the power to determine when any assembly should be canceled or forcibly quashed.

Because of opposition to such sweeping powers, interim President Adly Mansour has reserved his decision to ratify the law that may be withheld until a new parliament is elected. Some here believe the law was rushed to approval in time for Mr. Morsi's trial, next Monday, to give security forces an additional weapon should supporters of the deposed president take to the streets in protest.

Acting as if nothing untoward had happened in the past four months, Egyptian Foreign Minister Nabil Fahmy announced on the weekend that Egypt stood ready to help mediate an end to current tensions between Iran and the UAE.

In view of the ongoing tensions within Egypt, the offer is viewed by many here as ironic and by others as somewhat one-sided.

Iran was among the first to condemn Egypt's military authorities for the Morsi ouster, while the UAE, on the other hand, along with Saudi Arabia, were the most supportive of the coup, even putting their money where their mouths are, contributing several billion dollars in assistance to Egypt to help it pull out of its economic tailspin.

Saudi Arabia and the UAE do not look favourably on the Muslim Brotherhood movement, from which Mr. Morsi hails. They view it as a threat to their state-run religious authorities.

Perhaps most normal of all, satirist Bassem Youssef returned to Egyptian television Friday night with his Jon Stewart-style current affairs program that is very popular with the literate classes.

His carefully scripted remarks, however, fell far short of the caustic attacks he had launched against Mr. Morsi when he was in office, attacks that led to charges being laid against Mr. Youssef's arrest and the cancellation of his program. However, the former heart surgeon's routine drew criticism for being too timid from several Brotherhood supporters.

However, even his Jon Stewart-lite satire was too much for some Egyptians who sent comments to Mr. Youssef's website that Gen. al-Sisi, who serves also as Defence Minister, should not be criticized in any way as long as he wears the uniform of the Egyptian military.

By some accounts, Gen. al-Sisi may not be wearing that uniform for long. Surveys continue to show he is the people's choice to be the next president. A new line of chocolates that bear his name and likeness even has been introduced.

He's also the choice of military officers, it seems. An overwhelming majority of these dutiful men and women say they want him to run for the office.

In that case, Egypt will run the risk of looking rather like what passed for normal during the three decades of Hosni Mubarak's rule. 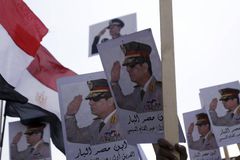 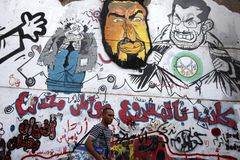 Opinion
In Egypt, no democracy without democrats
August 16, 2013 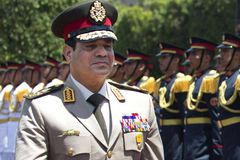 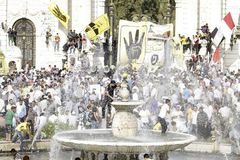 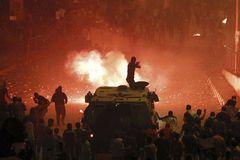