More than a million people took to the streets across the United States and around the world on Saturday in a historic show of opposition to the new American president, Donald Trump.

The peaceful women's marches marked the largest post-inauguration protests ever and overwhelmed organizers' estimates for turnout.

In Washington, the site of the biggest march, over half a million people converged near the National Mall, the spot where only a day earlier Mr. Trump's supporters had stood to watch him take the oath of office.

Read more: Thousands across Canada rally in support of Women's March on Washington

The number of marchers on Saturday appeared to be larger than the crowd at the inauguration. They overflowed the planned route for the march, sending a sea of sign-waving protesters into adjoining streets.

The immense demonstration of resistance to the new administration was spearheaded by women alarmed by Mr. Trump's policies and behaviour.

Large marches took place in dozens of cities across the the U.S., including New York, Boston, Seattle and Denver. In Chicago, the crowds gathered for the rally were so large that organizers curtailed the march portion of the event. Women also marched in other cities worldwide, including Toronto, London and Berlin, in a show of solidarity with the American protests.

On Saturday, women of every age and ethnicity – together with many men – packed a large area of central Washington, chanting, singing, drumming, and waving signs in spirited protest. For many present, it was the first time they had ever participated in such a march, but Mr. Trump, they said, had galvanized them to action.

"I'm one of those people who believe there is a reason for everything," said Jane Lesser, 65, who lives in Reston, Va., and had never before attended a demonstration. "Maybe the reason Trump got elected is to make the rest of us wake up."

"People are united in their fear of the future," said Fatima Ghani, 28, who marched together with her husband. "This is a watershed moment for my generation. I hope it makes people feel like they're not alone, and that just because Trump won, it's not over."

From early in the morning in Washington, the subways were packed to overflowing, as train after train of people headed to the downtown core to join the march. By 1 p.m., more than 470,000 people had taken the subway, according to The Washington Post, a weekend record (by contrast, 193,000 trips were taken on Inauguration Day by 11 a.m.). Unlike the prior day, there was barely any police presence as dense crowds moved through the city.

Throughout the crowd, there were marchers wearing pink hats with cat ears. The so-called "pussyhats" were an unofficial symbol of the march created in response to Mr. Trump's comments captured on tape from 2005, in which he boasted of having grabbed women by the genitals. Mr. Trump later described his comments as "locker room talk."

Marchers had converged on Washington from all over the country. Jessica Gebhards and four friends flew in from Kansas City, Mo., for the occasion. "This election really shook up women our age," said Ms. Gebhards, 32, explaining that they had taken certain rights and progress for granted.

Her friend Lauren McEnaney, 33, is the mother of a two-year old girl. Ms. McEnaney's eyes filled with tears as she described her motivation for joining Saturday's march. "I'm doing this today, so my daughter doesn't have to march tomorrow," she said.

As they walked the streets under overcast skies, the marchers goaded Mr. Trump. "We want a leader, not a creepy Tweeter," some shouted, in reference to his preferred channel of communication. "Hands too small, can't build a wall," chanted others, a reference to Mr. Trump's promise to construct a wall on the border with Mexico and to his long-running feud with a magazine editor over the size of his hands.

Jacquelyn Fail, 58, of Birmingham, Ala., had bought plane tickets to visit Washington in October, anticipating an election victory by Hillary Clinton, Mr. Trump's opponent. She came anyway – only she went to the march, the first of her lifetime. "It is so important for us to really stick together," Ms. Fail said. "All colours united as one – and it's not going to stop here."

As the march continued, the protesters flooded into downtown Washington. They filled some of the viewing stands erected along the route of Mr. Trump's inaugural parade. At one large intersection, a group of Trump supporters on a trailer blocked their way. The marchers rapidly surrounded them and shouts broke out between the two groups. Police on motorcycles arrived to escort the Trump supporters away, forestalling further confrontation.

Earlier in the day, a three-hour rally featured speakers like feminist icon Gloria Steinem and Cecile Richards, the president of Planned Parenthood, a women's health and reproductive rights group that is a frequent target of Republicans. Celebrities like Madonna, Ashley Judd and America Ferrera also spoke.

Highlights from the Women’s March on Washington and worldwide
January 21, 2017 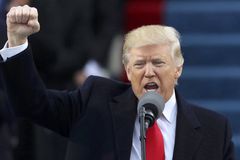 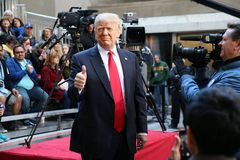