The United States may have just witnessed the biggest nationwide demonstration in its history. But Saturday's marchers will find that changing the course of history is a much harder prospect.

According to a running count compiled by two political scientists, more than three million people took part in women's marches in hundreds of cities and towns across the United States (at least 260,000 more participated worldwide). Experts believe that makes Saturday the largest demonstration ever in the U.S. in absolute terms.

The marches are not only unusual because of their size and geographic scope. Unlike previous major demonstrations in U.S. history, the women's marches were not the outgrowth of a well-established movement. Nor were they aimed at getting the President or Congress to take particular actions.

Related: Hats off to the women: A look at the knitted pink headpieces that helped make protest history

Related: Highlights from the Women's March on Washington and worldwide

"This is unprecedented," said Jane Mansbridge, a political scientist at Harvard University. President Donald Trump and the Republicans who control Congress "are not going to be affected at all by these demonstrations, so that's not the goal … This is citizens speaking to other citizens and saying: Pay attention."

On Sunday, the organizers of the Women's March in Washington rolled out their first initiative aimed at maintaining the momentum of the protests. They called on participants to commit to taking 10 actions in the next 100 days, traditionally a period of intense activity for a new president. In the first action, the organizers urged women to write a postcard to senators about the issue that matters most to them.

Marian Mollin, a historian at Virginia Tech University, said that one important function of a big demonstration is to make dissent visible to the country as a whole and also to activists who might feel isolated in their communities.

By that measure, the women's marches are already a success. In one piece of anecdotal evidence, Prof. Mollin said that people in her community in southwestern Virginia who had never engaged in political action before have been posting on Facebook since the marches about how they have contacted their representatives in Congress.

"Even if only a fraction of the women who went on this march come home and start really doing the work, that's significant," Prof. Mollin said.

Unlike previous major demonstrations – for instance, in support of civil rights or against the Vietnam War – the women's marches had no real organizational infrastructure behind them. Now the challenge is to create such an infrastructure.

"The issue is not what people do for 100 days, but for 1,000 days," said Todd Gitlin, a scholar of political movements at Columbia University. "A lot of people were juiced up over the weekend, that's clear. Some depression will set in. It's not an onward march uninterrupted toward glory."

Prof. Gitlin said that the only mass turnout on a single day that resembled the women's marches would be the Moratorium on the Vietnam War, a set of protests that culminated in a major demonstration on Nov. 15, 1969, both in Washington and in cities and towns across the country. At least 500,000 people gathered in the country's capital, comparable to Saturday's march.

However, that protest came only after four years of antiwar political activism. "Now in a way the order is inverted," Prof. Gitlin said. "The crisis is Trump and we're at a starting point." The real question, he said, is whether the marchers "are ready to think of what they did over the weekend as a down payment on an extended commitment."

History is clear on one point: Demonstrations alone are almost never sufficient. "The huge marches tend not to be the things that lead to policy changes," said Prof. Mollin of Virginia Tech.

She noted that women agitating for the right to vote in 1913 mounted a landmark march in Washington the day before the inauguration of President Woodrow Wilson. But it wasn't until five years later, after some of the participants in that march had adopted different tactics – picketing the White House and going on hunger strikes – that Mr. Wilson decided to support their cause. The U.S. finally ratified women's right to vote in 1920.

On Aug. 28, 1963, as many as 300,000 people gathered for the historic March on Washington in support of civil rights and economic progress for African-Americans. It was a watershed moment for the movement, but continued campaigns and protests were necessary to obtain the passage of the Civil Rights Act in 1964 and the Voting Rights Act in 1965. "You have to think of these marches as part of a whole spectrum of protest that a movement deploys," Prof. Mollin said.

One profound yet subtle impact of demonstrations is the way they change the people who participate in them. Young people in particular begin to consider themselves active citizens rather than bystanders, said Prof. Mansbridge of Harvard. "You begin to see yourself as a person who can take a courageous act," she said. And after Saturday's marches, "Now we have a whole bunch of people who have changed their own image of themselves."

Opinion
Marching with millions: What I learned in the streets, away from my screen
January 23, 2017
Canadian Women's March protesters plan long-term activism
January 22, 2017 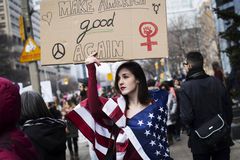 For Women’s March on Washington protesters, the fight is far from over​
January 22, 2017
Follow Joanna Slater on Twitter @jslaternyc
Report an error Editorial code of conduct
Due to technical reasons, we have temporarily removed commenting from our articles. We hope to have this fixed soon. Thank you for your patience. If you are looking to give feedback on our new site, please send it along to feedback@globeandmail.com. If you want to write a letter to the editor, please forward to letters@globeandmail.com.
Comments