But for a brief blip these past few years, Egypt has for decades been a country in which there existed only one authorized point of view – and anyone who questioned it too loudly would soon find themselves doing so from the inside of a prison cell. Since the revolution of 2011, thousands of activists have struggled – and many lost their lives – in an effort to change that reality.

But as evidenced most recently by the ludicrous conclusion of a truly astonishing court case in Cairo this week, old habits die hard.

An Egyptian court on Monday sentenced three journalists – Peter Greste, Mohamed Fahmy and Baher Mohamed – to between seven and 10 years in prison on charges of fabricating news, endangering national security and assisting terrorists (in this case, members of the Muslim Brotherhood). The three men are affiliated with Al Jazeera, the Qatar-based news network whose Arabic channel is despised by many Egyptians for being too pro-Brotherhood. Mr. Fahmy is a Canadian-Egyptian with dual citizenship.

Mr. Greste and Mr. Fahmy, as well as four other activists, were sentenced to seven years. Mr. Mohamed received a full decade because at the time of his arrest he was in possession of a spent bullet casing he found on the ground during a protest. A number of other journalists were also convicted in absentia.

The verdict brings to an end a trial so devoid of evidence and unconcerned with fact as to constitute farce. Among the exhibits brought forward by the prosecution to demonstrate the journalists' guilt were a documentary about football, a series of holiday photos and video footage of sheep farming – the relevance of this evidence was never explained, and never had to be. The court process itself, it turns out, was mere formality. This was a verdict in search of a trial.

Almost exactly one year ago, after massive street protests, then Egyptian president Mohammed Morsi was tossed from his office and held in detention. Following eleven months of violence largely unprecedented in modern Egyptians history, Abdel-Fattah el-Sissi, a former leader of the military that overthrew Mr. Morsi, was elected the country's new president by a landslide.

Overwhelmingly, the climate in which Mr. el-Sissi rose to power over the last year has relied heavily on a single narrative. In this narrative, Egypt and its glorious 2011 revolution are under threat from myriad shadowy agents, both foreign and domestic. And only a powerful, patriotic leader can save the country from the brink of ruin.

Chief among Egypt's monsters under the bed is the Muslim Brotherhood. In the year since Mr. Morsi's ouster, Brotherhood members have been slaughtered by the hundreds in their protest camps, their rank-and-file forced into hiding or chased out of the country to regional safe havens such as Qatar, their leadership sentenced to death.

There is no doubt the century-old Islamist organization has always been chiefly concerned with its own interests. The group's public-relations machine has shamelessly painted itself alternately as the victim of the oppressor and the champion of the oppressed at every turn.

In fact, the group's de facto control of the presidency by virtue of Mr. Morsi's election two years ago was a result not of overwhelming popular support but because Egypt's myriad other political groups, having atrophied under decades of authoritarian rule, could not temper their infighting nor field a palatable candidate.

There is also little doubt that Mr. Morsi, during his brief tenure, was ineffective at best and malicious at worst. His attempt to grant himself temporary unchecked powers prompted millions of Egyptians to the streets to demand his removal – a popular revolt seized upon by the country's military.

But in the last year, among supporters of the el-Sissi regime, "Brotherhood" has become essentially synonymous with "terrorist," which in turn has become synonymous with "subhuman." There exists, it seems, no form of punishment too degrading, unwarranted or brutal if its recipient is branded with the Brotherhood label.

As such, it was perhaps unsurprising, in the aftermath of Monday's court ruling, to see prominent Egyptian TV news personality Ibrahim Issa defend the verdict on-air by arguing that the three men sentenced were not real journalists – and were Brotherhood members anyway. Neither statement is true, but that hardly matters. In the past few months alone, Egypt's influential TV personalities have blamed the Brotherhood for everything from rampant sexual assaults to the country's frequent power outages.

The calculus that braces this unprecedented crackdown on dissent is simple and self-sustaining. Every act of repression – from draconian anti-protest laws to excessive sentencing to the detention and sometimes outright killing of protesters – administered by the Egyptian state and its judiciary in the past year has been framed as a measure to rid the country of the much-loathed Brotherhood. And so loathed is the Brotherhood that many Egyptians have cheered these measures on, even if their impact extends well beyond the Islamist group. The result is a vicious cycle: The people support the regime in suppressing the people who don't support the regime. And so on.

But the anti-protest laws are indiscriminate, the mass arrests and detentions often free of just cause, the trials sometimes unconcerned with fact or reason. Their goal, it seems, is not to crush the Brotherhood but to crush dissent – to make clear that there exists no greater crime in present-day Egypt than to challenge the official narrative. If the Brotherhood – a group whose candidate would have never won the presidency in the first place had even a semi-decent alternative been available – is taking the brunt of the damage in this effort, it is only because every other potential opposition group in the country is either hopelessly demoralized, disorganized or impotent.

Ultimately, there is one "crime" of which the Al Jazeera journalists are guilty – doing what journalists do, asking questions, challenging all sides. That they have been labelled as Brotherhood agents is little more than a branding of convenience.

The only thing that matters in the eyes of Egypt's newest regime, it appears, is reverting the country to its pre-revolution status as a one-opinion state – a place where the official version of events is dictated from the top, and God help anyone who challenges it on the way down. 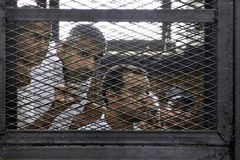