When the concrete and barbed-wire barrier separating Israel from the Palestinian West Bank started going up a decade ago, it was built mostly on land on the Arab side of the 1948 ceasefire line (the "Green Line") that defined the modern state of Israel. As such, the construction of what was intended to be a means of security for Israel has angered Palestinians. It frequently has split up Arab families, kept farmers from their fields, students from their schools, and separated friends and lovers.

Omar, the title character of the new film by Arab-Israeli filmmaker Hany Abu Assad, was one such person. Fortunate, some might say, to have his home on the Israeli side of the barrier, he was torn from his childhood friends and from Nadia, the young woman he loved and wanted to marry. Omar is forced to dodge Israeli military patrols and use a knotted rope to scale the eight-metre-high wall in order to visit them and to return safely back.

This very gritty and very real existence is powerfully conveyed in Omar, the latest Abu Assad film to deal with the cross-border issues arising from displaced Palestinians. His 2005 feature, Paradise Now, told the story of two childhood Palestinian friends who are persuaded to carry out a suicide bombing in Tel Aviv. It won a Golden Globe award and was nominated for an Academy Award for best foreign-language film. His 2003 documentary, Ford Transit, showed the life of a Palestinian taxi driver, one of the hundreds who drive the Ford van, and the Palestinian passengers he transports through Israeli checkpoints that dot the West Bank.

In Omar, childhood friends join a resistance group and attack and kill an Israeli soldier. Captured and tortured in prison, Omar is offered a lifeline that will also save his girlfriend's life, if only he'll collaborate with the Israelis. It turns out others may have accepted similar offers and no one knows who can be trusted.

The film won a jury prize earlier this year at Cannes and is slated to be the Palestinian nomination for the Oscars.

Like Omar, Mr. Abu Assad lives on the Israeli side of the line, but finds himself drawn to the Palestinian side. Born in 1961 in Nazareth, one of the larger Arab communities that ended up inside Israel when the state was created in 1948, he carries an Israeli passport but says he has long considered himself more of a Palestinian.

"I'm not a nationalist," he wanted me to understand as he sipped mint tea with me this week in Toronto, where Omar had its North American premier. "I don't care if there's one state, two states or no states [in Israel/Palestine]. All I care about is that people are treated justly."

"I understand perfectly well Israelis' need to feel secure," he said. "But I don't think creating a purely Jewish state is the answer. Jews and Palestinians both deserve to be treated justly."

"Because of Israel's success, the people close their eyes to the injustice," Mr. Abu Assad said. "And wherever there is injustice, there is resistance."

And he certainly does. Omar is a riveting film that packs a wallop. Its chase scenes are worthy of a Jason Bourne movie, and its lead actor, Adam Bakri, in his film debut, is as compelling a character. He even does many of his own stunts, including scaling the wall, and bounding along the tops of unfinished buildings to escape capture.

This film is about Palestinian culture and, while sympathetic, it emphasizes matters of trust and betrayal. It is violent and pulls no punches when it comes to depicting Israelis.

Mr. Abu Assad said it was shown two weeks ago in the West Bank city of Ramallah in a makeshift cinema with a borrowed projector. Despite "not looking one hundredth as good" as what is seen in a commercial theatre, "people's jaws just dropped at some of the scenes," he said.

The film will be considered anti-Israeli by many people, but Mr. Abu Assad expects no difficulty exhibiting it in Israel.

Just as Mr. Abu Assad has helped take Palestinian films to a whole new level, far from the earnest, heavy-handed propaganda films of 20 years ago, so too the Israeli industry has come a long way. One right-wing Israeli friend, after seeing Omar this week in Toronto, said she loved the movie and expects it to attract large audiences in Tel Aviv.

Israelis too are putting a film forward for Oscar consideration this year, Bethlehem , which also deals with issues of trust and the matter of collaborators.

Mr. Abu Assad has a wonderful eye for detail, yet came late to filmmaking. He left Nazareth in his early 20s to study aeronautical engineering in the Netherlands.

"There was this Rothman's cigarette ad in a magazine," he recalled quite vividly. "It showed a handsome pilot in his uniform and hat bounding up the steps of his commercial airliner as two attractive stewardesses looked on, admiring him. I couldn't wait."

After graduating with a degree in engineering, Mr. Abu Assad stayed on for two years working in Holland.

It was there he met the young Palestinian filmmaker Rashid Masharawi, who hailed from the Shati refugee camp in Gaza. Mr. Masharawi had turned to film as his ticket out of the camp, and was writing and directing some short films and documentaries when he met the Nazareen.

Mr. Abu Assad gave up his day job and joined the Gazan full time as his assistant.

"I fetched coffee, cleaned, all sorts of low level jobs," he recalled. "But I got to learn about film and I loved it."

Mr. Abu Assad says despite his success and the invitations he receives, even from royalty in the Gulf, he still finds himself often doing the menial things.

"In Ramallah," he said, referring to the screening of Omar two weeks ago, "we didn't have the money to do very much. So there I was hanging the posters myself." 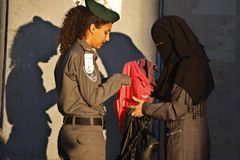 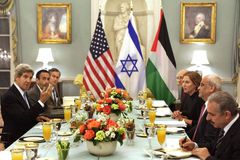