On a sunny morning in the chaotic metropolis of Jakarta, motorcycles and scooters weave around cars rammed into gridlock as Ririn Sefsani plunges down a staircase into the busy Tanah Abang market to hand out flyers. The political organizer mingles easily as she touches people gently on the back, politely interrupts conversations between clothing vendors and customers, and presses piles of flyers into the hands of people who voted for Joko Widodo, known universally as Jokowi in Indonesia.

Her passion – and the dedication of thousands of grassroots volunteers on the streets and on social media – helped Joko Widodo edge ahead of his rival to narrowly win Indonesia's presidential elections back in July. And now, as Jokowi prepares to take office on Monday, he needs his supporters more than ever.

Ms. Sefsani has known Jokowi since he became the mayor of the small city of Solo in 2005. She watched as he began to practise his hands-on, conciliatory, humble style of politics that focused on specific projects and continued to define him as he rose to become the governor of Jakarta – and then the president-elect.

Activists like Ms. Sefsani are drawn to Jokowi, a self-made businessman, because he shattered the stereotype of the aloof, middling, patronage-obsessed Indonesian politician. He is not corrupt and he is interested in reforming the bureaucracy. In Jakarta, he opened up hiring and made it transparent. His close circle of advisers includes an activist from Solo who worked with street vendors and sex workers, hardly the old guard Jakarta elite that has dominated politics here since the fall of the dictator Suharto in 1998.

Jokowi, of course, has already won. Technocrats on his transition team have been toiling away on ministerial minutiae for months now. And Jokowi's inauguration as the country's president – the first ever transition from one elected president to another in Indonesia's history – is simply ceremonial.

What exactly is Ms. Sefsani doing handing out flyers like Jokowi is fighting for his political life? Because in some ways, he still is: For Jokowi and his team the hard work starts now, and his grassroots supporters are hitting the streets to rally support for his ambitious agenda at a time when it seems under threat.

"He gives Indonesian people hope," Ms. Sefsani says. "But I'm rational. It's not going to be easy for him."

She has a point, and that point is written on her flyer: "Don't let Jokowi walk alone."

For added effect, there is a small image of Jokowi, shirt-sleeves rolled up, looking rather forlorn in front of the country's imposing national legislature, where his defeated presidential rival, Prabowo Subianto, leads a coalition of parties that hold a majority.

It is a critical time in Indonesian history as Jokowi takes charge of 250 million Indonesians, the world's fourth most-populous country, the third-largest democracy and the world's largest Muslim-majority nation. There are huge challenges ahead.

One of the biggest is infrastructure. The ports of this archipelago nation are in such a mess that it's more expensive to ship between Indonesian islands than it is to ship to Singapore or other more distant destinations. That means wildly and unfairly inflated prices for some of Indonesia's poorest in the country's eastern islands. And it leaves industry clumped around dysfunctional Jakarta – which is dragging the city down.

Jokowi also has to cut Indonesia's wasteful fuel subsidy, which eats up about one-fifth of the country's budget. That would free up money for his national health and education campaigns, where he hopes to arm Indonesians with cards that empower them to demand services from the state – much like he did as governor of Jakarta.

He has to improve the low quality of education. He has to boost manufacturing. The economy is growing at a steady pace, but slipped below 6 per cent as China's demand for Indonesia's plentiful commodities began to wane. It needs to grow faster for the millions of young Indonesians flooding a job market that has little for them.

These are what economists call "structural reforms," and for Jokowi the list is practically endless. He also has to battle the establishment – including in his own party. But Jokowi's track record is clear: He has brought disparate groups together, proven his dedication, and delivered clear results on multiple occasions. He has done this by hitting the streets and forging deep connections – of support and understanding – between himself and the ordinary, working class Indonesians.

In Jakarta, I visited a group of tower blocks on the city's northern outskirts to speak to people Jokowi had relocated to clear a flood catchment area. Jokowi had been to see them numerous times. He ate on the ground with them. He subsidized rent in their new location and gave them free TVs and fridges. He built a greenhouse for bird's eye chilies, spinach and tomatoes. Everyone there I spoke to seemed to love him and to have voted for him.

"He got to know us first and he explained everything. It was very well done," says Imam, who, like many Indonesians, has only one name. He said he plans to go down and celebrate Jokowi's inauguration in the city's main square. "I'm a full supporter of Jokowi – from the time he was governor until the time he is president."

People's expectations are now crushingly high that Jokowi can do for Indonesia what he did for Solo and Jakarta.

"He will not have much time to deliver," says Adrian Ruthenberg, the country director for the Asian Development Bank. "The administration is acutely aware of this."

And now, Jokowi is farther away from people like Imam.

Even if his circle of advisers hope he can use technology to sustain, and extend, his famous drop-ins across the whole country, his organizers are still pushing to get their supporters out for the inauguration – to show Jokowi's enemies in the legislature that the people voted for his agenda. They are planning a huge march and expecting large crowds at the national monument in the centre of the city. They want people to buy into Jokowi, to trust him, to give his ambitious agenda time.

But they also want to keep people close. Which is why the other slogan on Ms. Sefsani's flyer reads like an exhortation and a warning in equal measures:

"Don't let Jokowi stray too far from the people." 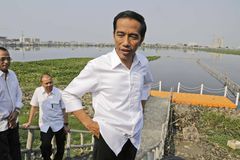 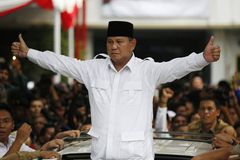